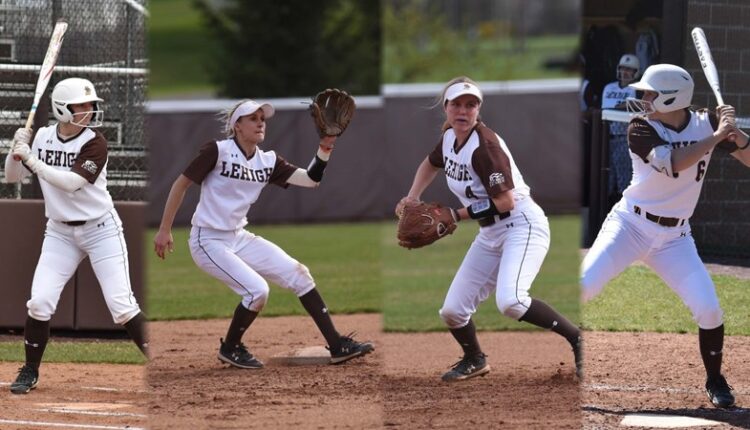 Barjaktarovich and O’Rourke were recognized for the second consecutive season and the senior infield duo along with Cimino add academic honors to their All-Patriot League selections from earlier this week. The trio also serves as Lehigh’s team captains for the 2022 season.

The Scholar-Athlete of the Year and Academic All-Patriot League teams are voted on by the league’s sports information directors. To be eligible, a student-athlete must have at least a 3.20 cumulative grade point average and be a starter or key player in his/her sport. Freshmen or students in their first academic year at their school are not eligible for the honor.

Last year’s Scholar-Athlete of the Year, Barjaktarovich holds a 3.84 cumulative GPA as an HR management and marketing major. The senior shortstop recently won her second consecutive Patriot League Defensive Player of the Year award and is now a two-time All-Patriot League honoree, earning first team honors a few days ago. Barjaktarovich is batting a team-best .393 and leads the Mountain Hawks with 55 hits, 33 runs scored and 23 stolen bases.

O’Rourke also carries a 3.84 GPA majoring in earth and environmental science. She is now a two-time second-team All-Patriot League selection at second base to go along with her back-to-back Academic All-Patriot League accolades. One of just two Mountain Hawks to start all 44 games thus far, O’Rourke is hitting .293 with 20 runs scored and 26 RBIs. She has played excellent defense at second base, before moving over to third last weekend.

Cimino followed her first career All-Patriot League honor with her first academic award. She is a biology major with a 3.65 GPA. Cimino is hitting .378 through 42 games with 14 doubles, four triples, four home runs and 31 RBIs. A member of last year’s All-Patriot League Tournament Team, Cimino was exceptional during the Patriot League regular season where she batted .385 with 10 extra base hits and 17 RBIs.

Cannon picks up the first postseason honor of her career. The sophomore started all 44 games in center field for the Mountain Hawks, batting .336 with 21 runs scored and 14 RBIs. Cannon batted .364 during the Patriot League regular season to rank third among Lehigh regulars. Off the field, Cannon carries a 3.74 GPA majoring in industrial and systems engineering.

The Mountain Hawks (26-17-1, 15-3 PL) will open the Patriot League Tournament against Army West Point, Thursday at 2:30 pm from BU Softball Field in Boston. Host Boston University will face Colgate in the tournament’s first game at noon. The three-day tournament runs through Saturday with all tournament action scheduled to be broadcast on ESPN+.