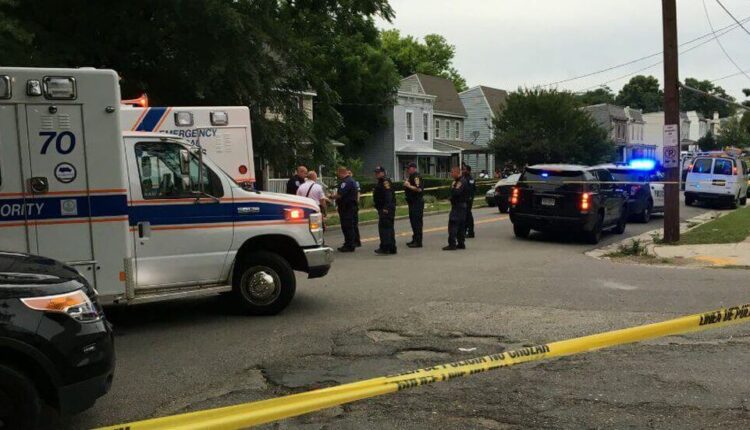 Don’t be surprised if the GOP tests its anti-crime message in Virginia. But will it work?

Police and paramedics work the scene of a shooting that wounded two people, including a 7-year-old, last month in Richmond’s East End. (NBC12/The Virginia Mercury)

One thing is sure watching local TV newscasts anywhere in America: if it bleeds, it leads. The nightly roundup of shootings, fires, sensational car crashes and other calamities has always been a mainstay of local broadcast journalism.

And these days, gun deaths take up considerably more airtime.

Nationally and in Virginia, numbers of incidents in which people use firearms of some sort to kill or maim others is in the second year of a sharp increase — a phenomenon that’s out of step with rates of other violent crimes against persons. And there’s a strong likelihood that it will manifest itself in our state politics this fall and congressional races next year.

Last year, 19,403 people in the United States died of gunshots not counting suicides, a 25 percent increase over 2019, when there were 15,447 gun deaths, according to the Gun Violence Archive, an ideologically neutral nonprofit that collects, verifies and publicly disseminates data on shootings in all 50 states.

So far this year, July is on its way toward being the deadliest month because of a grisly Independence Day weekend in which more than 150 people were fatally shot in 400 separate shooting incidents.

Fourteen incidents were classified as mass shootings, which the GVA defines as an incident in which four or more people are killed or wounded by gunfire, excluding the shooter or shooters.

Virginia recorded 15 gun deaths over the four-day holiday weekend — nine in Richmond, the state’s undisputed gun homicide capital. That brings the state’s 2021 gun violence total to 244 killed and 515 wounded through July 5, according to the GVA data. That’s up 10 percent compared with the 221 killed and 466 injured during that same period the previous year.

How resonant the issue of violent crime will be is yet to be seen. Republicans will argue that Democrats have owned the Executive Mansion for the past eight years and the House of Delegates and state Senate for the past two. Thus, they will assert, Democrats own the problem.

Rural or urban, we all bear the economic cost of gun violence. Here’s how to fix it | Opinion

Republican Del. Jason Miyares, who is challenging Democratic Attorney General Mark Herring’s bid for a third term, raised the issue in a debate between the two candidates last month.

In the gubernatorial race, Republican Glenn Youngkin and former Gov. Terry McAuliffe, a Democrat seeking an encore term, have skirmished over the issue. Youngkin, downplaying a Trump-stained GOP brand and trying to detour around hot-button social issues that alienate moderate suburban voters, promises to keep guns out of the hands of criminals and support law enforcement.

McAuliffe proposes banning assault-style weapons and so-called “ghost guns” (untraceable, do-it-yourself and hand-assembled weapons lacking serial numbers) and restricting availability of high-capacity magazines that, in some cases, can feed dozens of rounds into a firing chamber, one after another, without stopping to reload.

But the issue is more complicated than pithy platitudes would make it seem. For one thing, while gun violence and aggravated assault are continuing a sharp rise that began last year, other violent crime rates have decreased.

The rate of murder and non-negligent manslaughter involving a firearm increased from 3.9 incidents per 100,000 people in 2017 to five per 100,000 last year, according to Virginia Crime Online, a Virginia State Police website that allows the public to query state crime data.

There’s also the context that as alarming as the climb in deadly gunfire has become, it’s nowhere as horrific as it was from the late 1980s through the early ‘90s when ruthless gangs thought nothing of murder to protect their drug franchises.

It so shocked the conscience of Virginia that a Republican with far less a chance of being elected governor than Youngkin enjoys now saddled up the issue and rode it to victory. George Allen won in a rout over the heavily favored Democrat, then-Attorney General Mary Sue Terry, by promising to get tough on crime and abolish parole.

“Yes, gun crime is up, but from a much lower baseline than it was back then,” said Matt Bennett, a longtime Democratic strategist who now heads public affairs for Third Way, a nonprofit that advocates for center-left public policy.

“In those days it was an epidemic of violence,” he said.

Other factors further muddy the issue that was so clear-cut for Allen in 1993, said Bill Schneider, professor emeritus at George Mason University’s Schar School for Policy and Government.

The death of George Floyd last summer and the rage it unleashed forced the nation for the first time to take a critical look at how Black Americans are disproportionately punished by the U.S. criminal justice system and decades of “tough-on-crime” laws that exacerbated the disparity.

“High crime rates have, in the past, helped Republicans in Virginia and elsewhere who ran on ‘tough-on-crime’ platforms, usually calling for severe penalties,” Schneider said. It was true for Allen, but, he noted, Democrats also got political mileage from it.

The 1994 crime bill that resulted in mass incarcerations of Black men was shepherded through the U.S. Senate by the current president, Joe Biden, and signed into law amid great fanfare by the president at the time, Bill Clinton.

Also complicating things is the insane proliferation of guns and the damage it has wrought in the numbers of mass shootings. The GVA logged 2,000 mass shootings in the United States from the start of 2017 through the end of last month, an average of 1.2 per day.

Virginia’s 46 mass shooting incidents in that span ranks 18th, far behind worst-in-the-nation Illinois with 214. That allows Democrats to counter the GOP’s “lock-‘em-up” proposals with plans to rein in the easy availability of guns, particularly among teens, Schneider said.

“I do not yet see the same conservative backlash on crime happening right now, but I wouldn’t be surprised if Trump and his supporters make a big issue of crime in the 2022 midterm campaigns,” he said.

The biggest threat to Democrats has roots within its own ranks in differing views about law enforcement. When the angry cry to “defund the police” emerged from last summer’s protests, some on the Democratic left flank advanced it to the detriment of some of the party’s own House candidates last fall, according to an election postmortem done by three Democratic advocacy groups, including Third Way.

According to the research, the “defund” movement fed a potent GOP narrative labeling Democrats as “radicals” and “socialists,” helping Republicans gain seats in the House even as the GOP lost the White House.

The GOP’s message was especially resonant among Latino, Black and Asian American/Pacific Islander voters, the study found. Democrats took those friendly constituencies for granted and did little or nothing in the way of a response.

They assumed that Trump’s anti-immigrant rants would repulse them and they would fuel a blue tide that would significantly expand the Democratic House majority. Instead, research has since shown, Republicans — including Trump — performed better among those groups last year than they had in  2016.

“McAuliffe and other Democrats have had the benefit of watching the defund debates over the past year and seeing what’s happened in the races since November,” Bennett said.

Bob Lewis is a columnist for the Virginia Mercury, a sibling site of the , where this column first appeared.