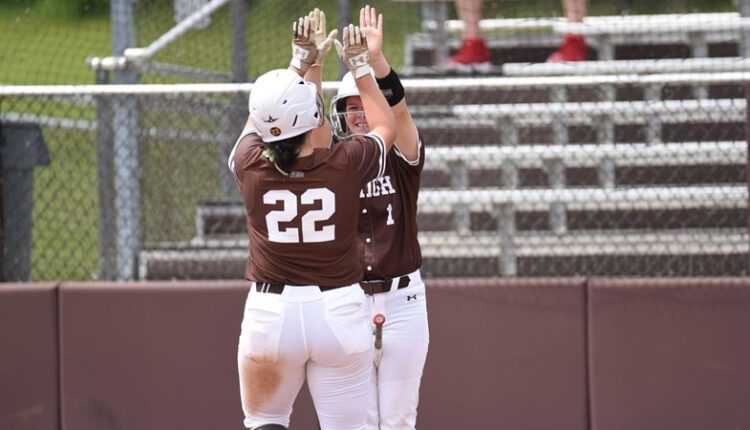 EASTON, PA. – The Lehigh softball team has extended its winning streak to six in a row, securing a spot in the Patriot League tournament with a double-header sweep by rival Lafayette at Metzgar Fields on Saturday.

Junior Jaelynn Chesson enjoyed a monster day, going 6 against 8 with three home runs and 10 RBIs. Sophomore Emily Cimino went 4-4 in the first game, which Lehigh won 10-0 in six innings. Chesson drove a 6-2 win at the Mountain Hawks in five of Lehigh’s six runs in the second game.

Saturday’s sweep offsets Lehigh’s season record at 14-14 as the Mountain Hawks switch to 12-8 in the Patriot League game. Lafayette drops to 1-19 overall and 1-15 in the league.

Cimino opened the game with her second home game of the season in first place, which she saw from Hannah Cook on top of the first.

Lehigh added a second run in the fourth inning when Junior Karsen O’Rourke drove away with a single stolen second, moved up to third on the flyout, and met Addie Kittel on a victim squeeze bunt from Junior.

Chesson’s RBI barrage started with a brace in the fifth inning. She then scored when O’Rourke hit a mistake to give Lehigh a 5-0 lead.

The Mountain Hawks put the first game out of reach with a sixth inning in five runs. Senior Payton Alsobrooks and Cimino did home runs with base hits and Chesson cut the frame with a triple home run to the left and center.

Junior Gabriella Nori was strong in the circle, allowing only one hit, a second inning single from Morgan Olynyk, and one with nine strikeouts en route to her second shutout of the season.

Lehigh finished the first game with 16 hits. Cimino and Chesson mated for seven, while O’Rourke and classmates Carley Barjaktarovich and Melissa Fedorka each contributed two.

Barjaktarovich later led the second game with a single and two clubs. Chesson hit their second home run of the day, this one in midfield, to give the Mountain Hawks an early 2-0 advantage.

Lehigh returned to the front in sixth when Cimino reached third base due to a Lafayette mistake and Chesson followed in their second home game and third of the day to bring the Mountain Hawks back to the top 4-2. Chesson delivered her fifth RBI of the game and tenth of the day with an RBI single on the seventh, and newbie Brooke Cannon followed with an RBI single to give Lehigh a four-run pillow.

Freshman Katelyn Young started in a circle and took the win by allowing two runs with seven hits over 5.2 innings. She hit five and went two to break her season record 2-2.

Nori was relieved to finish in goal position sixth and knocked out Kristen Brown to keep Lehigh two points ahead. She was working around a single on seventh to earn her save.

Miner moved for Lafayette 3 against 4. Lehigh had 11 goals in game two, with Chesson (three), Barjaktarovich (two) and Cannon (two) taking the lead.

Lehigh and Lafayette will conclude the Home-and-Home series and the regular season with a double-header Sunday in the Leadership Park. Due to the impending bad weather, the start time for the first game has been postponed to 10:30 a.m.