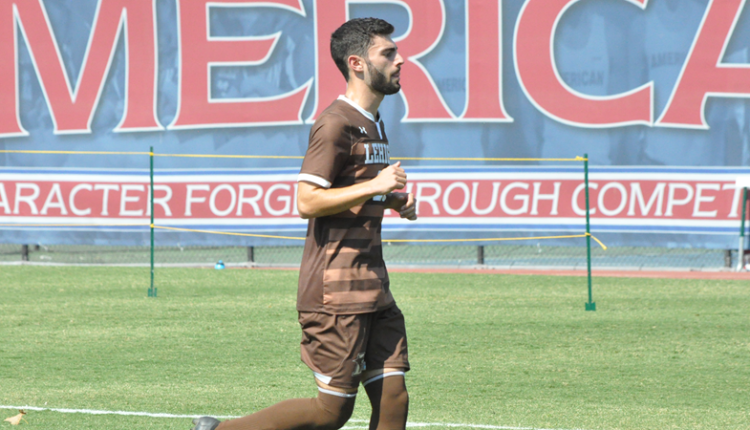 WASHINGTON – For the first time in 472 days, the Lehigh men’s soccer team faced the wrong side in a 2-0 final and was suspended on American Saturday afternoon to open the 2021 spring season at Reeves Field. The defeat means an unbeaten streak of nine games for the Patriot League and an unbeaten streak of eight games in the regular season from 2018.

Prior to that game, the Mountain Hawks hadn’t made a decision to open the Patriot League at Holy Cross since 2016.

American had started the competition strong early on, scoring a third-minute shot at goal saved by junior goalkeeper Noah Sutherland. The Mountain Hawks had two misses in the fifth and 14th minutes, but to no avail.

After two shots missed the mark for AU, Jason Bouregy gave the Eagles the lead in the 21st minute, giving the Americans a 1-0 lead.

Five Mountain Hawk shots went wrong in the next 20 minutes, including two from second striker Jack Sarkos and a free-kick attempt by Michael Tahiru, but the Eagles held onto a 1-0 lead at halftime.

Lehigh got the first glimpse of the second half of a shot from Tahiru that went down left and was saved by American goalkeeper Lorenzo Gordon. This was the first of Lehigh’s two shots on goal in the competition.

After the Eagles received a corner in the 71st minute, substitute Nick Dimitrijevic helped AU greatly, scoring the support of Robert Matei to put them 2-0 in the 72nd minute.

Dominic Flowers had an opportunity to score in the 85th minute when he became free and put a body on the ball but it went straight over the bar.

The American defense did their job, keeping the Mountain Hawks goalless, taking the 2-0 win on Saturday afternoon.

Natan Rosen, Jack Sarkos, Dominic Flowers and Austen Carranza each had two attempts to shoot Lehigh, while Michael Tahiru, Bratislav Petkovic and Thatcher Cooper had one.

Junior Noah Sutherland made his debut between the pipes, allowing two goals but collecting two saves.

Lehigh is returning home to the Ulrich Sports Complex next Saturday, March 13, to host Army West Point at 6 p.m. The game will be broadcast live on ESPN +.