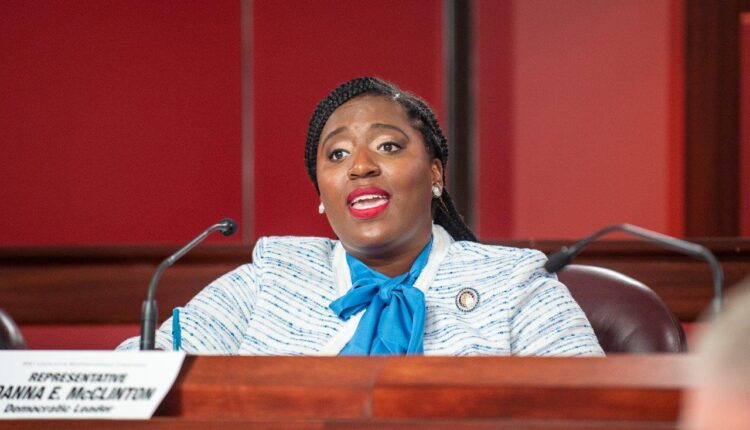 With control of the House in dispute, Republicans go to court as tensions rise

With a lawsuit to halt special elections and talk of a “paperwork insurrection,” little is certain about Jan. 3, when the General Assembly is set to convene to organize itself for the next session.

In the weeks that follow, however, many who track Pennsylvania politics say there’s only one likely outcome: House Democrats will control the chamber with a one-vote majority after special elections for three vacant seats.

When those elections could happen is now itself in question after House Republican Leader Bryan Cutler filed a Commonwealth Court lawsuit against Secretary of State Leigh Chapman seeking an injunction to stop them, the Associated Press reported Saturday.

On Wednesday, Democratic Leader Joanna McClinton, D-Philadelphia, was sworn in as House majority leader citing the 102 House seats Democrats won in November. She then set special elections on Feb. 7 for House seats left vacant by the death of Rep. Anthony DeLuca and the resignations of Reps. Austin Davis and Summer Lee, all Allegheny County Democrats.

That prompted Republican Leader Bryan Cutler, of Lancaster County, to renew his accusation that  Democrats were carrying out a “paperwork insurrection” on the basis of a majority that does not exist. Cutler filed the lawsuit to halt the elections late Friday.

“Under Pennsylvania law, the writ of election must be issued within 10 days of a vacancy,” Reigelman said in a statement. “Having won the majority of legislative districts in the November election – which is indisputable – Leader McClinton was sworn into the legislative session early to serve as the chamber’s presiding officer in order to meet this constitutionally-driven requirement.

“There is only one reason to delay the special elections for the vacant legislative seats and that is to deny nearly 200,000 voters their right to representation,” Reigelman said.

The Democrats’ election victory buoyed hope among party loyalists that they would have control of the House for the first time in 12 years.

Republicans were quick to point out that one of the Democratic representatives elected could not vote. To cast a vote in the House, a representative must be alive, physically present, and sworn into office, Republicans said, leaving the House with a 101-101 split.

Then, even as McClinton announced her swearing in as majority leader on Wednesday, two Democratic representatives elected to higher offices tendered their resignations, effective immediately, leaving the Democrats with 99 votes.

Davis said he was resigning to focus on his role as lieutenant governor-elect. Lee resigned ahead of taking her seat in the U.S. House of Representatives next month.

Deepening the uncertainty about which party will control the lower chamber next month, the Legislative Reference Bureau weighed in Friday with an advisory opinion that neither party can claim a 102-vote majority.

“From William Penn to Joanna McClinton, there has never been a more provocative and abstruse dynamic at play,” said former Rep. Bill DeWeese, a Washington County Democrat who served as House speaker from 1993 to 1994.

Some Republicans told the Capital-Star the Democrats and McClinton had overplayed their hand by claiming majority control.

“They have to take a position that dead people can vote,” Rep. Carl Metzgar, R-Somerset said.

Metzgar said that although he has no firsthand knowledge of the Republican House leadership’s plans, he predicted that there would be a lawsuit to establish the Republicans’ control of the House.

Republican political strategist Dennis Roddy said there’s little Cutler can do to forestall a Democratic takeover if they win the Feb. 7 special elections for Davis, DeLuca and Lee’s seats. All three are in strongly Democratic districts in and around Pittsburgh.

But, Roddy said, “Joanna McClinton is like a little kid who can’t wait for Christmas and opens the presents on Dec. 23.”

By forcing the issue and declaring control of the House, McClinton may have delayed her own case by inviting the Republicans’ court fight, Roddy said.

Adam Bonin, a Democratic Philadelphia election lawyer, there is one thing at stake that both parties see as worth fighting over.

In a late-night vote on July 8, Republicans in the House passed Senate Bill 106 to amend the state Constitution to include language stating that the governing document does not guarantee any rights relating to abortion or public funding for the procedure.

The bill also includes language requiring voters to show ID at polling places, allowing gubernatorial candidates to select their running mates, creating a system for election audits, and letting lawmakers disapprove regulations without a possible veto from the governor.

Constitutional amendments must be passed twice in consecutive sessions before putting the language before voters for final approval. They do not require the governor’s signature.

“I think all of this has to be viewed through that prism,” Bonin said. “If they have the gavel they’re going to try to put SB 106 on the ballot in May.”

Bonin said that’s likely the only thing that Republicans could accomplish with a short-lived minority and a Democratic governor.

“It can’t be about legislation,” Bonin said. “It’s about that power.”

Rep. Matthew Bradford, D-Montgomery, said the period when there are 101 Republicans and 99 Democrats is going to be relatively short.

“Rather than play the game of musical chairs we would like to get to the business of the people,” Bradford said.

Bradford declined to say whether Republican leaders expressed any willingness to compromise or whether Democrats believe they have the votes to elect McClinton as speaker. But he noted that both Cutler and McClinton selected Feb. 7 for special elections.

That’s 60 days after Davis and Lee’s seats became vacant, the earliest a special election could be held.

“Whether it is the former speaker, or the current majority leader setting the date, there is unanimity to bring this to a head as soon as possible,” Bradford said.

Let’s not whitewash the racism from American history | Opinion