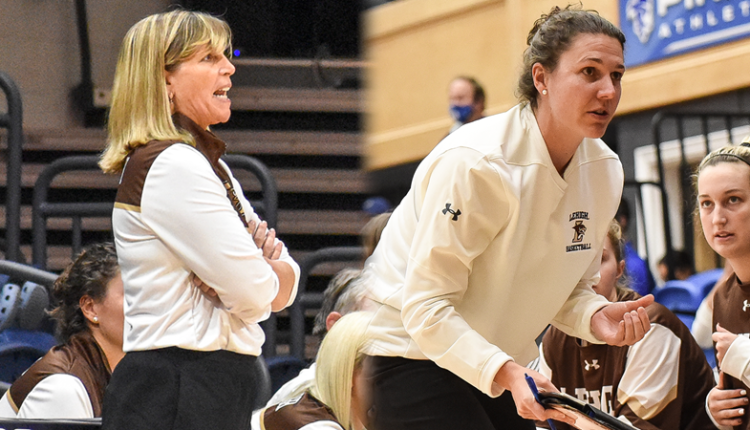 BETHLEHEM, Pa. – Following a stellar 32-year career as a head coach at Lehigh, the last 27 which were spent leading the women’s basketball program, Sue Troyan will be transitioning into a senior leadership role within the Lehigh Athletics Department. Associate head coach Addie Micir has been promoted to head coach and will be assuming her first head coaching position as the eighth head coach in program history.

A news conference featuring Troyan, Micir and Lehigh Dean of Athletics Joe Sterrett ’76 will be held Wednesday at 3:15 pm at Stabler Arena.

Under Troyan’s guidance, Lehigh grew into one of the Patriot League’s upper-echelon programs. In addition to their four Patriot League titles, the Mountain Hawks made six championship game appearances and reached the semifinal round in 10 of the last 15 league tournaments. Lehigh added a fifth postseason appearance under Troyan as the 2010-11 squad qualified for the WNIT.

Prior to taking over as women’s basketball head coach prior to the 1995-96 season, Troyan served for five years as an assistant basketball coach and two years as the Director of Athletic Program Budgets. She initially began at Lehigh as a graduate assistant before becoming Lehigh’s first-ever full-time assistant coach.

From 1991-1995, Troyan also served as Lehigh’s head softball coach, posting a 126-90-1 career record and guiding the Brown and White to three consecutive Patriot League titles on the diamond from 1993-1995 before handing the program over to her husband Fran, who has led the Mountain Hawks to 14 titles in 26-plus seasons.

“I’m thankful for the many young women I have coached over the past 32 years as a head coach at Lehigh and most proud of their growth and development through their Lehigh experiences and beyond in their roles as mothers, spouses, leaders, employees and caring, loving citizens,” Troyan said. “Fran and I were fortunate to be able to raise our family within the cultures of both of our programs while being surrounded by the best and brightest in our women’s basketball and softball alumnae. We are forever grateful for their influence and impact on the Troyan family .”

Micir recently completed her third season as an associate head coach on Troyan’s staff. She joined the staff for the 2019-20 season and played a key role on the staff of Lehigh’s most recent Patriot League title in 2020-21. Micir served as coordinator for Lehigh’s offense and end of game special situations. She also worked closely with Lehigh’s post players including All-Patriot League performers Camryn Buhr ’20, Emma Grothaus ’22 and Frannie Hottinger ’23.

“I could not be more thrilled to serve as the next head coach for Lehigh women’s basketball,” Micir said. “This is a program with an established standard for excellence both on the court and in the classroom, and I look forward to continuing to meet and exceed those elite standards. To become a head coach at a place so near and dear to my heart surrounded by people that have become family is truly incredible. Our student-athletes, program, department and University will get my best every single day. The journey to learn, grow, and lead continues.”

In addition to her recruiting responsibilities, Micir also served as the coaching staff’s liaison with the department’s Leadership Development and Sports Communications teams.

“Working with Sue for the past three seasons has been an unbelievable joy and an impactful journey,” Micir said. “She’s the ultimate developer of people as can be seen by all of the wonderful and successful women’s basketball alumnae and by all of the brilliant coaches who have come from her coaching tree. A passionate competitor, Sue always lead with compassion, a dynamic that has built Lehigh women’s basketball into the program it is today. How lucky was I to learn from a legend. How even luckier to call that legend and mentor and friend!”

A 2011 Princeton graduate, Micir came to Lehigh after spending the 2018-19 season as an assistant coach at her alma mater, where the Tigers captured Ivy League regular season and tournament championships.

Prior to her year at Princeton, Micir served as an assistant coach at Dartmouth for five seasons, where she recruited nationally and internationally, helping to bring in players from 14 different states and three foreign countries. Two Big Green players were named to All-Ivy teams under Micir, including guard Kate Letkewicz in 2018 and Lakin Roland in 2016.

Micir had a prolific playing career at Princeton, being named the program’s first unanimous Ivy League Player of the Year in her senior season. A 1,000-point scorer and a three-time All-League selection, she played a big role in leading the Tigers to back-to-back Ivy League titles in 2010 and 2011. The league title in 2010 was Princeton’s first outright championship since 1978 , which included the team’s first-ever NCAA Tournament berth.

A Newtown, Pa., native, Micir earned her bachelor’s degree in Psychology from Princeton in 2011 and her master’s degree in Liberal Studies from Dartmouth in 2018.

What they’re saying about Addie Micir:

“Addie is prepared for this position as she has established herself over the last three years as a coach who has a strong basketball mind and understanding for the game, is a strong recruiter, connects incredibly well with players and is a proven talent developer. She is a highly competitive person who has a track record of success in everything to which she has put her efforts. I am excited to watch the program grow under her leadership.” – Sue Troyan, Lehigh head coach 1995-2022

“Addie is a home run hire. She is a brilliant basketball mind. Her teams will be prepared and they will be fun to watch. She is a winner in every sense of the word. Her playing career speaks for itself, but her ability to teach will soon be on full display. I hired Addie once and tried to hire her again many times. This is a win for Lehigh. I can’t wait to see what she does for the entire Mountain Hawk family.” – Courtney Banghart, head coach University of North Carolina

“Addie is an exceptional coach and an even better person. She has a passion for learning and teaching the game, she cares greatly for the young women she coaches, and will find a unique way to lead and bring out the best in her players. She has worked and prepared for this moment, and I am confident she will make a lasting impact in the Bethlehem community. Lehigh is incredibly lucky to have her.” – Carrie Moore, head coach Harvard University