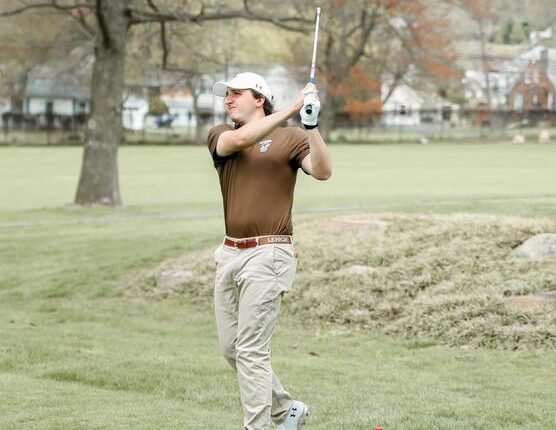 APALACHIN, NY – It was a strong opening round for the Lehigh men’s golf team Sunday on day one of the Matthews Auto Intercollegiate. All six Mountain Hawk players shot 75 or better on the Links at Hiawatha Landing. Lehigh’s team score of 290 leads the 10-team field heading into Monday’s final round.

On top of leading the team race, Lehigh’s low player Sunday was its individual, senior Daniel Song, who shot three under par 69 and sits in second place, one stroke behind leader Owen Gauder of Niagara. Song made five birdies on Sunday.

First-year Jake Roth was the low player among Lehigh’s scoring team. Roth matched Song with five birdies and shot two under par 70, as he is tied for third place.

Seniors David Hurly and Sam Barton and sophomore Aidan Oehrle are also in the top 20 individually. Hurly finished at two over par 74 with three birdies Sunday and is tied for 15th place, while Oehrle and Barton are tied for 18th place after both shooting 75. Oehrle matched Song and Roth with five birdies, but was hurt by a pair of double bogeys . Barton carded three birdies in his round.

The Matthews Auto Intercollegiate concludes Monday with the final 18 holes of play. Lehigh will play with Niagara and La Salle with tee times beginning at 9:45 am

Review: For a young Chinese American, our hearts are missing in action