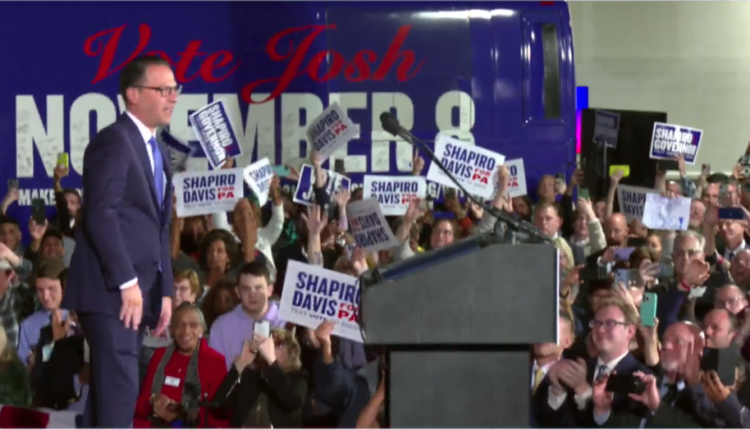 Pennsylvania Attorney General Josh Shapiro’s election as governor — along with the distinct possibility that his fellow Democrats will take control of the state’s House of Representatives away from Republicans  — could ultimately mean that the state will invest more money in education.

A change in House leadership could also affect the state’s ongoing school funding case that involves a challenge from plaintiffs that the state’s system of school spending is inequitable, inadequate, and deprives students of a high quality education.

In his victory speech last week, Shapiro said that with his election “real freedom won, the kind of real freedom that sees possibility in all God’s children, which forces us to then step up for those kids and invest in their public school and give them a shot.”

During a press conference in Philadelphia featuring several area lawmakers who spoke confidently about the election results that are still being tallied, Democratic Rep. Matthew D. Bradford, who represents part of Montgomery County, said that in elections and legislative sessions, Democrats have consistently called for the state to spend more money on schools.

“Everyone knows that our schools are chronically underfunded,” he said, and that funding is unfairly distributed.

Those discrepancies, he stressed, hurt children of color the most.

“No one with a clean conscience can tell you that Pennsylvania’s doing right by public education,” Bradford said. He added that while the $850 million increase for schools in the current state budget represented progress, “We need to do more, we need to be strategic, we need to work with our new governor, and we plan on doing that as a Democratic majority.”

An increase in K-12 spending and a change in the state’s school funding formula would likely be a particularly big windfall for Philadelphia schools, which have proportionally fewer resources for a student population facing greater socioeconomic challenges compared to surrounding suburban districts.

Republicans have controlled the House since the 2010 elections. The 50-member Senate is on track to remain in Republican hands, but the dynamics have changed, said Democratic Sen. Vincent Hughes of Philadelphia.

“We’re in a time of opportunity in education policy,” he said, with conditions ripe for major new investments, including a sizable budget surplus and a $5.3 billion state rainy day fund. Not since Ed Rendell and Tom Ridge served as governors did the state have that kind of financial cushion, he said.

“We have an environment where we can dramatically advance the kind of educational proposal required to create 21st century schools for every student regardless of their ZIP code or economic status,” Hughes said.

Meanwhile, closing arguments in the state’s landmark school funding case, William Penn School District et al. v. Pennsylvania Department of Education et al., wrapped up in Commonwealth Court in July. Judge Renee Jubelirer is expected to issue a ruling in the case before the end of the year.

Among state officials, only Republican legislative leaders, including the current House Speaker Bryan Cutler, have mounted a defense of the current system in the case. Now, Shapiro (as well as Democratic Rep. Joanna McClinton of Philadelphia, who is in line to be the state’s first female House speaker if her party takes control of the chamber) could nominally become defendants by capacity of their office. Both have said they want to increase education aid and would almost certainly decline to actively defend the system in court.

As the state’s attorney general, Shapiro filed a “friend of the court” brief backing the plaintiffs.

During the campaign, Shapiro had expressed support for “lifeline scholarships” that would redirect some state education aid for the bottom 15 percent of schools in terms of performance — many of which are in Philadelphia — and give the money directly to parents instead.

But Hughes said Wednesday he did not expect Shapiro to actually push such a proposal, and said the governor-elect’s focus was ultimately on getting low-performing schools more resources.

The teachers’ unions for Philadelphia and Pennsylvania were quick to congratulate Shapiro.