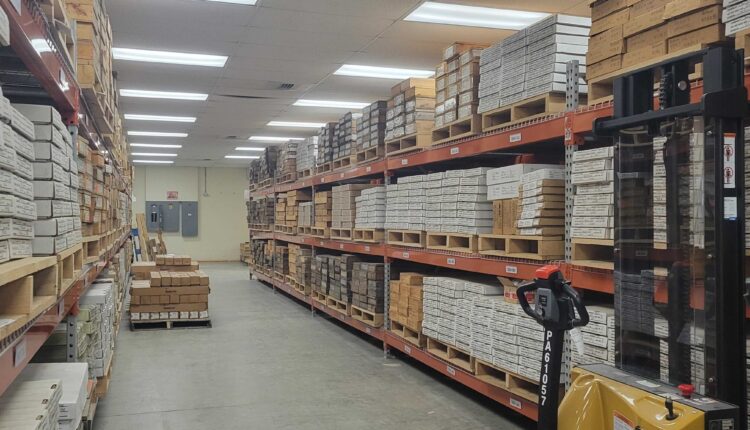 Geological core samples from across the commonwealth will soon have a new home, state officials said this week.

The Department of Conservation and Natural Resources said that the state’s collection of subsurface core samples and drill cuttings from all over the commonwealth will soon move from its current home at Pennsylvania Geological Survey headquarters in Middletown.

Officials at DCNR said that the agency is in the process of identifying a location and construction contractor for a new, $6-million core storage facility.

The core samples, experts said, are important tools for understanding how Pennsylvania’s geology could support carbon capture and sequestration efforts.

Core samples from across Pennsylvania on display at the Pennsylvania Geological Survey headquarters in Middletown on Tuesday, Nov. 15, 2022 (Capital-Star photo by Cassie Miller).

DCNR Secretary Cindy Adams Dunn said that the money for the new facility was allocated to the agency as part of the most recent state budget.

“We were really gratified in this last budget cycle when Governor Wolf and the Legislature granted us the use of some of our Oil and Gas Lease Fund monies to invest in the science, and from this budget, we achieved a $6-million grant in order to find additional core stores facility,” Dunn said. If you look around, you see your core cuttings are at the ceiling, our cuttings are coming up to the ceiling, we need more space. So the $6 million will allow us to find and construct a new facility to really continue to store and add to the scientific base.”

Dunn said that the core and drilling samples that will continue to be stored are crucial as Pennsylvania, along with researchers, and businesses in the private sector, devise plans to address climate change in the commonwealth.

“As we collectively work on ways to address a changing climate it’s important to have the best tools and scientific information at hand to inform those efforts,” Dunn said during a tour of the existing storage area.

“The samples available to the public through our Geological Survey are important to a broad range of research by universities, government agencies, and energy companies, so these improvements to our library will help advance carbon capture as well as many other research and decisions that rely on an understanding of geology.”

Carbon capture, utilization and storage (CCUS), is a process that captures carbon dioxide emissions and either reuses it or stores it so it will not enter the atmosphere, according to the U.S. Department of Energy.

State lawmakers have also expressed a strong interest in Pennsylvania’s potential to become a future hub for CCUS, as well as hydrogen-based plastic manufacturing facilities.

In April, state Sen. Gene Yaw, R-Lycoming, who chairs the Senate Environmental Resources and Energy Committee, announced that he would introduce legislation to create a “legal and regulatory framework for carbon dioxide capture and sequestration (CCS) projects” in Pennsylvania.

“These technologies offer us a reasonable path forward to tackle greenhouse gas emissions without crippling our economy,” Yaw said at a September legislative hearing on CCUS.

DCNR Bureau of Geological Survey Director Gale Blackmer said with CCUS and other future endeavors in mind, the scientific and economic value of the samples housed by the core sample storage facility “can’t be overstated.”

“The understanding of the geology below the surface, the geology beneath our feet, is part of everything we do,” Blackmer said. “… It touches everything from the water we drink to buildings that we live and work in, the roads we drive on, and the energy we use.”

Blackmer added: “We’re using the information that’s contained in these samples every day.”