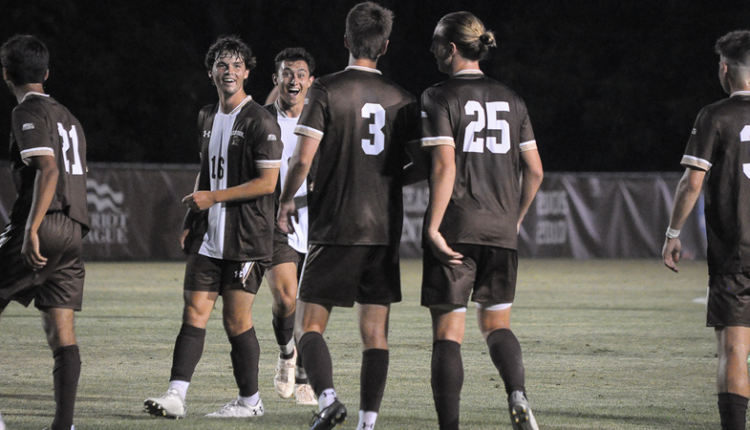 Winners of four of its last five contests to conclude the 2021 campaign, the Lehigh men’s soccer program ended the year with the right to host a Patriot League Quarterfinal matchup.

In 2022, the Mountain Hawks look to continue the success with a strong start, something that eluded them a year prior.

Led by The Ingrassia Family Men’s Head Soccer Coach Dean Koski in his 31st season at the helm, Lehigh opens the schedule Thursday at Temple at 7 pm

Koski brings in 10 first-years into the fold, joining a side that includes six sophomores, seven juniors and six seniors.

For a while, injuries have been a constant theme for the Mountain Hawks since before the pandemic, but the team looks to bring a great level of fitness to the field with hopes of contending for the program’s fourth Patriot League Championship and first since 2019.

“I think training has gotten off to a good start so far,” said Koski. “The team came back reasonably fit, which was positive with all of our testing. The mentality, the attitude and the energy has been really good. Having a two-day team building event at the beginning was really helpful in getting away from campus and I think that really helped the guys get to know each other a little better. We have a big first-year class coming in, which is a third of our team. So, integrating them became a very important part of our preseason.

“We’ve been at it for a week and a half, we’ve had few scrimmages and we’ve learned a lot about our players and we’re certainly satisfied with where we are now. We think the mixture of upperclassmen and first -years is really solid for this point in the preseason heading into our first game on Thursday.”

This upcoming season is poised to be the most “normal” of the last two following the events of the COVID-19 pandemic. With masks and testing seemed to be on the back-burner, the Mountain Hawks look to take a new mentality into getting back into competing for championships again.

“We have a junior and senior class here that were really in the thick of the pandemic,” Koski said. “They experienced what it was like not to be around one another and what it was like to be trapped in their dorms or apartments for the better part of a year. That experience makes them really appreciate what they are able to have right now, that feeling of normalcy.

“I think that has inspired a renewed energy and a renewed commitment to get back to who we are as a program. We’re a Division I program that wants to be in the top four in the league and compete for championships year-in and year-out. The expectations are serious when they are here playing and I can now see that mentality coming back into the program. Over the last couple years, that was certainly lost a little bit, but the last couple weeks have shown me that this feels a lot more normal.”

Local players Peter Tichy (Bethlehem, Pa./Freedom), Matthew Aitchison (Bethlehem, Pa./St. Stephen’s Episcopal School) and Gennaro Mazzella (Easton, Pa./Moravian Academy) highlight a first-year contingency of 10 that have acclimated as well as you could possibly hope for heading into the start of the season Thursday.

“I think our first years have done a great job feeling like a part of the program, in no small part due to the upper classmen doing a really great job embracing them and integrating them into everything that we’re trying to do,” said Koski. “I am very proud of the job the seniors and juniors have done with leading the program. They have supported and engaged the first-years well so that they feel they are equally as valued as they are.”

Of the 19 goals scored a year ago, senior forward Jack Sarkos had eight, including six in the final four contests. Lehigh’s lone Preseason All-Patriot League selection, Sarkos leads a group of strikers looking to make even more of an impact in the final attacking third.

“We have a core of four or five forwards that we can move in and out,” Koski said. “Jack is an important piece to that as the only proven goal-scorer returning on the team. We will find partners for him whether it’s Perry Kingson, Dominic Flowers or Gennaro Mazzella. We see that we have enough there to have some good partnerships with Jack.

“But we will continue to have to explore how we want to look and how we want to play. But right now, we are really focused on finding that additional goal-scorer to complement Jack.”

In addition to finding other center forwards to pair with Sarkos, the wingers will also provide a tremendous amount of offensive support to the pitch, something that will be a strength of the team once again this year.

“We have a great deal of depth on both sides of the wings,” said Koski. “We have returning players in Yoni Aidlberg and Austen Carranza that have logged quite a few minutes. But we have some first-years that have shown some promise as well that could either compete for a starting position or come off the bench and help us.

“I’m hopeful that between our returning players and first-years, we will have a platoon of wide midfielders.”

The loss of Stevo Bednarsky to graduation following five seasons of quality soccer in the midfield will cause there to be big shoes to fill, but Koski is excited with the players he has taking over that role.

“We’re going to manage a group of five central midfielders and three of those five are first-years,” Koski said. “With Hassane Diakho and Nolan Jetter having the most experience in the middle of the park, once they are healthy and ready to go, then we will have some depth there. We feel very confident with our midfield group and are pleased with where they are .”

On defense, Lehigh only had two shutouts through the entirety of the 2021 season and allowed 29 goals, the most given up in at least 20 years. The Mountain Hawks totaled 25 shutouts in the four years prior. It’s going to end up being a somewhat new era in terms of the center-backs, but they certainly seem to be up for the task this season, especially with senior captain Euan Forrest back on the field.

“We see Euan Forrest and first-year Sam Davis as our anchors there in the back,” said Koski. “But Michael Laret and Thatcher Cooper also have the ability to play in there as well. In our wide-back position, we’re also pretty solid there. We will probably be starting at least one first-year in that outside back position early on.

“But we also have some pretty good experience from Luke Briggs, who has logged a lot of minutes over the last two years. We think Thatcher [Cooper] will be more of a utility back for us. We also hope we can get some guys back soon that aren’t healthy right now that will also compete there. Honestly, our full-backs we feel good about. We would like to have a little bit more depth on the left side but we feel pretty good currently.”

There seems to be quite the amount of talent at goalkeeper this season with the arrival of first-year Tommy Chyzowych to the fold in addition to proven upperclassmen Jesse Ryan and Blake Koski, as well as sophomore Ryan Gross.

“We’ve been pretty pleased with the group of keepers that we have here,” Koski said. “We haven’t had the opportunity to see Blake play yet, he hasn’t been cleared to go from an injury. But Ryan, Tommy and Jesse have all done really well this summer and I think it’s going to be very competitive between four talented keepers for the starting spot.

“That’s the kind of competition that we want and feel comfortable with any one of those keepers out there.”

Out-of-market play is back in the non-league schedule as the Mountain Hawks head to 2021 NCAA Tournament qualifiers Penn State and West Virginia this year. Lehigh opens the season with three consecutive road contests: at Temple (Aug. 25), at UMBC (Aug. 29) and at St. John’s (Sept. 2).

“We certainly will be really getting after it during the first three games on the road,” said Koski. “Temple, UMBC and St. John’s are three really talented programs, so we have our work cut out for us. But that’s also an opportunity for us to travel with everybody for bonding and building relationships. When you get away from campus and play teams like that, you’re going to be challenged.

“Our first home game is against La Salle, a team that has always been good. Penn State will really challenge us, but we are excited to take them on. After that will be a mixture of league games and non-league games with Delaware and West Virginia being two important games we like to have.”

Lehigh ended up going into the Patriot League Tournament last season as the No. 4 seed with a home quarterfinal game at the Ulrich Sports Complex. Loyola Maryland, who clinched the Patriot League Regular Season title the last four seasons, won its first-ever Patriot League Championship in 2021. The league is as stacked as ever as the Mountain Hawks gear up to navigate it following a challenging non-conference slate .

“I looked at the way the preseason poll looked in terms of standings, and I thought it was pretty fair,” Koski said. “Based on where everyone finished last year and who they have coming back. I think Lafayette was slighted a little bit because they have a really strong class of fifth-years coming back. But it’s going to be a dogfight throughout the whole season.

“There are no Patriot League games that are sure-wins. Every league game is going to be competitive and we’re going to have our work cut out for us just to get into the tournament. We certainly feel like where we were picked ( fifth) is where we deserve to be picked, but it’s our job to try to improve upon that.”

Lehigh’s first home game of the season is set for Sept. 6 against La Salle at 6 pm The Mountain Hawks open the Patriot League slate at home on Sept. 16 vs. American, kicking off at 6 pm

Firearms & The Future Of Festivals