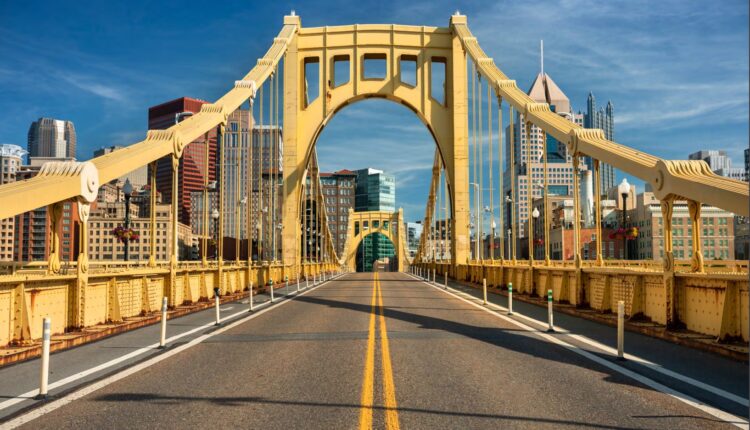 PITTSBURGH — Virginia Montanez was visiting the Children’s Museum in Pittsburgh with her daughter recently, when she noticed stone statues she had not really paid attention to in the past.

“There were all of these keystones with faces in them,” she said, “and I had never bothered to really look at them.” There was a worn little plaque that said the stones had come from an old post office building that used to be on the site, on Pittsburgh’s North Side, which Montanez remembered.

Busy pedestrian traffic under the Kaufmann’s Department Store clock at Fifth Avenue and Smithfield Street. Signs for the Hotel Henry and its Rathskeller can be seen in the distance. A street car is making its way down the street. Next to the clock, there’s a sign indicating daylight savings is in effect (Source: Historic Pittsburgh).

So she did some digging and found an old photo of the former post office, and sure enough, there were the stones.

“That’s what triggered the question of whether there was a map,” she said, because she knew of other pieces of Pittsburgh that weren’t there anymore, but which still had markers where they once stood. “I wanted to see them.”

She realized there was no map of these artifacts, so decided to build one. Last  week, she launched the project as an interactive map, and called it Pittsburgh Remains to Be Seen.

The list of artifacts on the site –so far– includes a sculpture that was once on the Manchester Bridge (which is long gone); a pylon from the D Gate of Three Rivers Stadium, which was demolished in 2001; the outfield wall and home plate from Forbes Field (demolished in 1971); and a sphinx statue from the Syria Mosque performance venue, once the home of the Pittsburgh Symphony and Pittsburgh Opera.

Montanez was able to cobble together photos of the former structures from various local collections including the Heinz History Center, the Roberto Clemente Foundation, the Children’s Museum, and other Pittsburghers who gave her suggestions about places they remembered and that they thought she should include.

The site has a contact form for suggestions, which includes a link to a video of Pittsburgh icon Fred Rogers if someone clicks the “I am being mean” button (with a gentle admonition about not hurting other people’s feelings).

She credits the Pittsburgh History and Landmarks Foundation for its efforts in preserving at least small pieces of the city’s past, even as buildings were torn down and ballparks blown up in the name of progress and new construction.

As she did her research, the names of former PHLF members James Van Trump and Arthur Ziegler kept popping up, as the ones who led the preservation efforts.

“They were the ones that were saying ‘if you’re going to take this building, can I at least have this piece of it?’” Montanez said.

It’s well known that Pittsburghers have a protective love of their local history, to the point where it’s not uncommon to get driving directions that include a place that no longer exists: “turn left by the old Kaufmann’s store,” for instance.

Rick Sebak of local public television station WQED-TV has an entire documentary series on Pittsburgh history, including things that aren’t here anymore, (which is frequently revived during the station’s pledge drives).

Montanez has a theory about why Pittsburghers are so nostalgic for the small pieces of their history that might not seem significant to non-natives.

“I always take it back to the steel mills, and the steel industry collapse,” she said. “I think that’s why our culture is holding on to the past because it was just ripped away from us so quickly, our entire economy just collapsed out from under us. 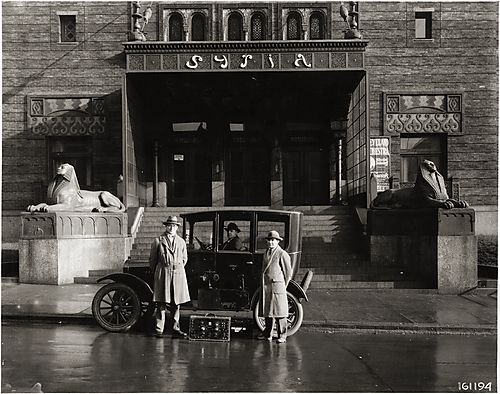 “Entire towns. were built around that industry, families, legacies, and then it was just taken away. I think that’s why as a culture, we’re constantly not letting the past go as easily as other cities,” she continued.

Montanez, who penned several popular blogs about Pittsburgh and writes a column for Pittsburgh Magazine, said her interest in history was sparked when she was researching the late “dancing” Pittsburgh traffic cop Vic Cianca.

She’s now getting a master’s degree in history –remotely – from the University of Massachusetts, Boston.

As for the map of artifacts, it’s a labor of love she plans to work on in her free time., But people who want to explore the list in person can print out a pdf for a walking tour. And she said actor

David Conrad, a Pittsburgh native who also staunchly supports his hometown, suggested she make it into an app which may happen at some point.

She’s already heard from people who rediscovered parts of Pittsburgh that they had forgotten, and is hoping the map can continue to be a free resource that helps people appreciate the region’s past.

“We kind of detach ourselves from history and we don’t learn lessons from it, and as a historian, I worry we don’t think about it enough,” she said, “If this gets people to look at history at something that exists currently within them, that would be cool.”