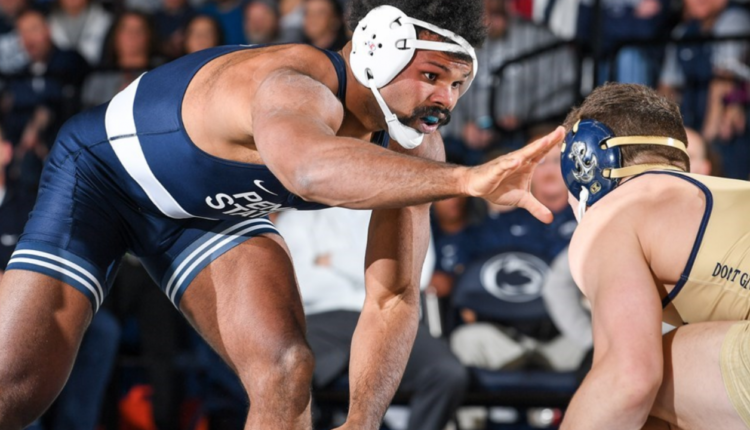 Penn State is No. 1 and Campbell is in for the 1st time ever in the latest college wrestling rankings

The No. 1 Penn State Nittany Lions opened their season on Sunday in style, shutting out Navy 45-0 and recording four pins in the process. The win keeps Penn State atop the NWCA poll once again, but the program will face its first Top-25 battle of the year next weekend against Arizona State in Tempe.

Iowa, Ohio State, Oklahoma State and Nebraska rounded out the Top 5 for the second week in a row, and most of the Top 25 held down their positions despite upsets at individual weight classes. Here’s what you need to know about the latest NWCA poll and what to expect from these top teams.

The No. 2 Hawkeyes will start their season Nov. 17 against UT-Chattanooga. Coach Tom Brands announced on media day that the dual will feature the debut of Gavin Teasdale, a highly recruited wrestler out of Pennsylvania who started his career at Penn State but transferred to Iowa City without ever stepping on the mat for the Nittany Lions. Teasdale is slated to compete at either 133 or 141, and he’ll join a stacked Hawkeye lineup that includes seven returning All-Americans and a two-time national champion.

“He’s on track…look forward to seeing him on the mat November 17th, I mean, why not?” 🗣️ @FloWrestling pic.twitter.com/Oo1wqzOFU7

No. 4 Oklahoma State will make its season debut Nov. 15 before taking on Lehigh in Bethlehem, Penn. the following day.

Penn State, Ohio State and Nebraska fill out the Top 5 again in No. 1, 3 and 5 spots respectively. The Nittany Lions dominated the Midshipmen behind pins from Anthony Cassar, Luke Gardner, Mark Hall and Nick Lee. Vincenzo Joseph also added a technical fall while Roman Bravo-Young put on a skills lesson against Casey Cobb on his way to a major decision. Bo Pipher, Kyle Conel, Creighton Edsell and Brody Teske also added wins. Penn State will wrestle at the Black Knight Invite next before their showdown against Arizona State on the 22nd.

The Buckeyes hold down their No. 3 ranking after this weekend’s win against Stanford. Both No. 1-ranked individual wrestlers at Ohio State maintain their top spot as well, with one winning his ranked dual in smoother fashion than the other. At 141 pounds, Ohio State’s No. 1 Luke Pletcher had a battle on his hands last weekend against Stanford’s No. 14 Real Woods, battling for a match-winning takedown in overtime after a wild scramble. No. 1 Kollin Moore, on the other hand, had no problem taking down No. 9 Nathan Traxler in major decision style 19-8. The only win for the Cardinal came at 165 pounds when No. 8 Shane Griffith pinned Ohio State’s No. 14 Ethan Smith to put six points on the board. Stanford still remains just outside the Top 25 but will look to fight for a spot in the rankings as the season continues.

Ohio State’s Luke Pletcher holds on to his No. 1 ranking at 141 pounds after taking down Stanford’s Real Woods 3-1 in sudden victory 😤 #GoBuckspic.twitter.com/hkUXTAOZvC

The No. 5 Cornhuskers put up two dominating performances, taking down Chadron State 37-3 and Nebraska-Kearney 47-0 in the Nebraska duals. Alex Thomsen picked up a first-period pin over Tate Stoddard and Mikey Labriola adding a pin of his own in just 13 seconds against Gavin Eason in the first dual. Labriola and Taylor Venz both recorded pins in the second match against the Lopers.

No. 6 Wisconsin picked up a 34-3 win over Buffalo, with the only Badger loss coming at 197 pounds with Taylor Watkins losing to Buffalo’s Sam Schuyler. Derek Spann also kept Seth Gross to a decision, which at this point in the year is a notable result. Coach Chris Bono’s squad then earned a 28-15 win over Edinboro in a dual that featured a Gross pin, as well a pin from 141-pounder Tristan Moran and All-American Evan Wick. Watkins did not wrestle against Edinboro, giving up six points by forfeit. These two team wins help put Wisconsin one spot above the Gophers, who won five titles at the Bison Open. Minnesota will wrestle rider next weekend for the second dual of the year, while Wisconsin will have the weekend off of competition before taking on Utah Valley.

BATTLE ON THE MIDWAY: Photos, highlights and analysis from the 2019 dual

Team of the Week: North Carolina

Lautt’s pin and Monday’s win in his return to the mat for the Tar Heels gives No. 17 UNC a 19-17 win over no. 19 Michigan! #TogetherWeWin pic.twitter.com/pqh2T3JFWG

Last weekend included a slew of highly-anticipated wrestling duals from across the country, and any number of teams could have picked up this week’s Team of the Week honor after some standout performances and individual ranked victories. However, the Tar Heels stood out from the pack as one of just a handful of teams to beat a Top 25 opponent, taking down then No. 19 Michigan 19-17 at Ann Arbor. Clay Lautt led the way for Carolina with a first-period pin against Michigan’s Reece Hughes for six crucial team points. Teammate Jaime Hernandez also added bonus points with his 20-7 major decision over Austin Assad, while Zach Sherman, AC Headlee and Kennedy Monday added wins of their own. The Heels will take on Stanford on Saturday in California and will aim to stay undefeated as they wrestle a Cardinal squad that is looking to squeeze in to the Top 25.

Coach Zeke Jones’ squad took down No. 23 Virginia 27-12, as well as Big Ten foe Purdue 22-19 to keep them undefeated on the year and within the Top 10 for another week. The key to much of the Sun Devils’ success, particularly in the tight battle with Purdue, was Zahid Valencia, the two-time NCAA champion who started his season with back-to-back pins, wrestling less than three combined periods between his 4 :01 pin against Max Lyon and his 1:01 pin over Tyler Love of Virginia. Valencia is hungry for a Hodge Trophy, and his performance over the weekend proved he has the dominance to compete for the highest honor. Teammate Josh Shields also picked up a fall in the Virginia dual, putting Sam Martino on his back 6:23 into the match.

The only other team to beat a ranked opponent last weekend was the Virginia Tech Hokies, a squad that continues to impress and added another W with a 21-18 win over Northwestern on the Mat on the Mound. Hokie Mitch Moore added a fall in the first period against Jack Tolin to give the team six crucial team points and keep them undefeated on the year.

The Utah Valley Wolverines went 1-1 this weekend, picking up a win against Sacred Heart before dropping to Purdue, but the most impressive action came at the Journeymen Classic the following day. Heavyweight Tate Orndorff added to his two pins from Saturday by taking down Oklahoma’s Connor Webb, Lehigh’s Jordan Wood and Arizona State’s Tanner Hall on Sunday, the last two of which turned heads considering Woods’ then No. 3 national ranking and Hall’s then No. 2 ranking. Orndorff is now ranked No. 4 at heavyweight behind 2019 NCAA champion Anthony Cassar, 2019 Junior World Champion Mason Paris and 2019 All-American Trent Hillger. Not a bad place for the sophomore.

No. 15 Pittsburgh held off Campbell to maintain its spot in the Top 15, but the Camels did add a few noteworthy performances. Most impressively, Campbell earned a big win at 184 pounds with Andrew Morgan beating then-No. 6 Nino Bonaccorsi 11-8, but the victory wasn’t enough to lift the team past the ranked Panthers and Campbell fell 28-6. The Camels, however, followed their loss to the Panthers with a 24-16 win over Ohio to sneak in to the Top 25 at No. 25 for the first time in program history.

Today Andrew Morgan proved he’s in his prime. The Campbell Wrestler took out one of the nation’s best in Pitt’s Nino Bonaccorsi (No. 6) with an 11-8 victory. pic.twitter.com/zNLXdBfurQ

The boilermakers moved themselves into the rankings and are tied with Campbell at No. 25 after taking down Buffalo 32-8 behind a pin from Max Lyon and beating Utah Valley 30-12. Purdue breakout star Kendall Coleman continued his undefeated season with a forfeit at 157 against Arizona State and a win against Jed Loveless of Utah Valley.

Army West Point also pushed itself into the rankings at No. 24, proving that this is a team to watch and one that could surprise some top programs in the coming weeks. Coach Kevin Ward’s squad beat Illinois 19-15 to pick up win over a Big Ten opponent, and then also added an 18-12 win over UT-Chattanooga the same day.

Are You an Optimist? Could You Learn to Be? Your Health May Depend on It.