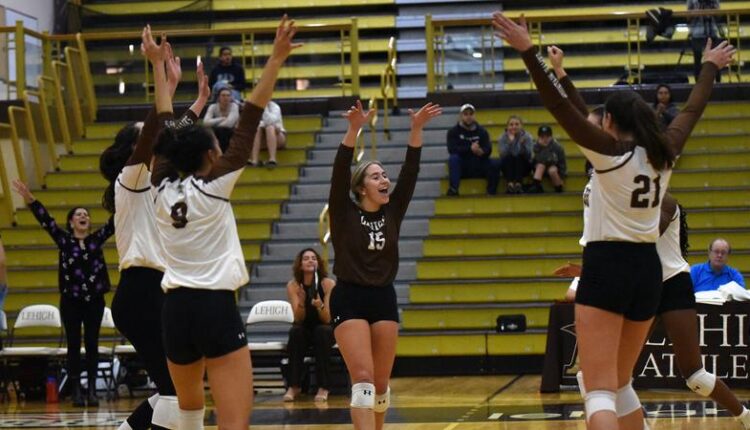 Mountain Hawks Travel to Loyola for a Patriot League Match

BETHLEHEM, Pa. – The Lehigh volleyball team makes the trip to Baltimore, Md. to take on Loyola at 4 pm on Saturday with the match being streamed on ESPN+.

The Mountain Hawks (11-9, 2-6 Patriot League) are coming off of a 1-1 weekend inside Leeman-Turner Area at Grace Hall where they picked up a 3-0 win in straight sets over the Greyhounds last Friday. Following his victory against the Loyola, Lehigh returned to Grace Hall to host Colgate last Saturday. The Mountain Hawks battled the Raiders but were unable to come out on top, falling 3-1.

Last weekend, sophomore Megan Schulte led the team 21 kills in two matches. She averages 3.63 kills per set and has tallied 232 kills so far this season which are team-highs.

First-year Natalie Luscomb, who was selected as the Patriot League Rookie of the Week and ranks second in kills for the Mountain Hawks, had two solid performances last weekend for Lehigh. Against Loyola, Luscomb picked up nine kills with no errors and five blocks. In Saturday’s match against Colgate, she finished with 11 kills and two blocks.

Sophomore Makena Smith put up some solid numbers for Lehigh last weekend. Smith tallied 34 assists in each match against Loyola and Colgate last week. The sophomore currently leads the team with 673 assists this season.

Loyola is currently 6-9 on the season but 4-4 in league play. The Greyhounds’ are also coming off a 1-1 week, falling to Lehigh on Friday but then earned a 3-1 victory over Army West Point the following day.

Lauren Link leads Loyola with 249 kills this season while Megan Bikala follows with 133. Six Greyhounds have double-digits in blocks with Cecylia Guye leading the squad with 45.

The Mountain Hawks are searching for their 12th victory of the season against Loyola on Saturday afternoon and are looking complete the season sweep over the Greyhounds.

Following this weekend’s action, Lehigh will be back home to host Bucknell Saturday Oct. 22 and Lafayette Sunday Oct. 23 for The Rivalry Presented by Lehigh Valley Orthopedic Institute.

Will Covid Spike Again This Fall? 6 Tips to Help You Stay Safe