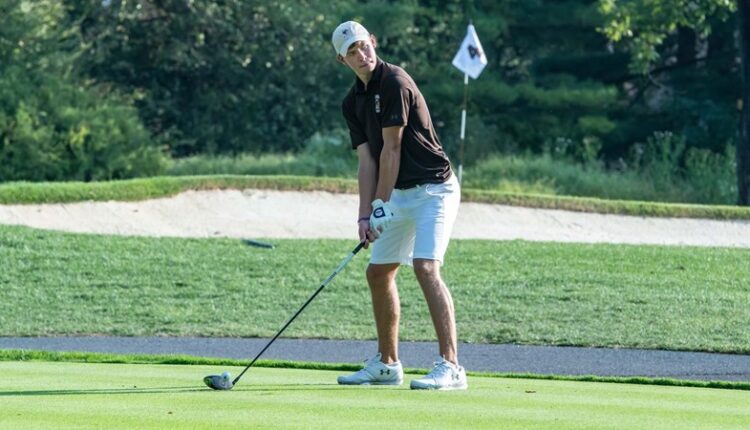 Mountain Hawks Tie For Ninth Place At The Doc Gimmler

FARMINGDALE, NY – Junior David Hurly carded a round of four under par 66 when Lehigh finished The Doc Gimmler Sunday with a team result of even par 280 on the Red Course at Bethpage State Park. The Mountain Hawks finished the two-day 54-hole event at 865 (299-286-280), finishing ninth in a field of 14 teams.

Lehigh’s second-lowest round on Sunday was turned in by Edmund Broderick, who made four birdies and four bogeys in a straight par 70 round. Broderick was 44th with 219 (73-76-70).

Junior Daniel Song and newcomer Jahan Bains shared 60th place with 225. Song went 80-72-73 with two birdies on Sunday while Bains went 78-72-75 and had a birdie on his final round.

Villanova’s Peter Weaver was the individual medalist at four under par 206 (68-71-67). He hit Navys Chad Deegan in one fell swoop.

The Mountain Hawks will next take on Lafayette in the annual President’s Cup games on September 28th at Hamilton Farm Golf Club in Gladstone, NJ.

Georgia Eyes New Medicaid Contract. But How Is the State Managing Managed Care?