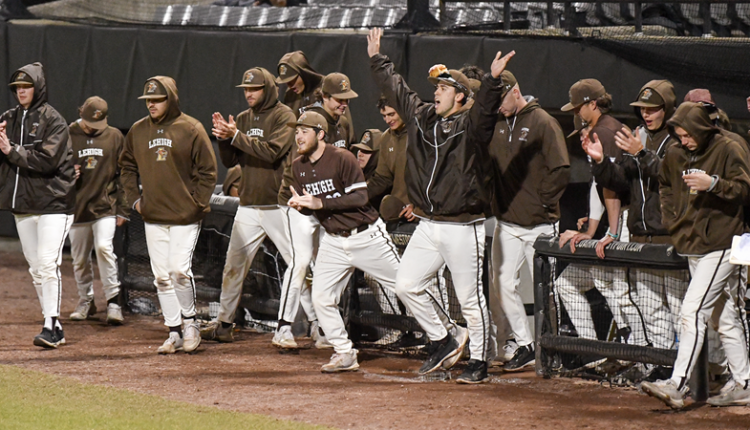 BETHLEHEM, Pa. – The Patriot League Tournament has arrived as the third-seeded Lehigh baseball team visits second-seeded Bucknell this weekend in Lewisburg for the semifinal round. Saturday’s doubleheader kicks off at noon before Sunday’s single game (if necessary) begins at 1 pm All three games this weekend will be streamed live on ESPN+ (subscription required).

Last season, the Mountain Hawks fell just a win shy of hoisting their first Patriot League title since 2015 and third all-time, but this year, the team has an opportunity to make up for lost time.

For one, Lehigh claimed the season series over the Bison, 3-2 and looked strong in those wins. The Mountain Hawks picked up a victory earlier in the year over Bucknell at home before sweeping the Bison on Saturday, Apr. 23 before falling in the finale, 20-3.

The Mountain Hawks are led by now two-time reigning Patriot League Player of the Year Casey Rother, who has been on a significant tear to end the season. On his current 18-game hitting streak, the team’s longest since Mike Garzillo’s 19-game streak in 2015, Rother is batting .473 with 35 hits, seven doubles, seven home runs and 28 RBIs. On the season, Rother was excellent with his Patriot League-best .371 batting average, league-high 72 hits, 18 doubles and 48 RBIs. He also hit nine home runs and scored 42 runs.

Young (.348), first-year Jake Whitlinger (.318) and Gorla (.312) are all hitting above .300 at the plate this season and have been incredible offensive threats throughout the campaign. Young is the only other player besides Rother to gather north of 50 hits this season with 54, adding eight doubles, two triples and a home run in 47 games. He also has stolen 10 bases, second behind Whitlinger’s 14.

The long ball has been a steady theme for this team this season, leading the Patriot League in homers with 46 for the fourth season in a row. Of those 46, 20 have been launched by Retzbach (11) and Rother (9) with seven coming off the bat of first-year Justin Butler and six from Sweeney. Retzbach’s total is just two shy of tying the single-season program record of 13 set by both Jacen Nalesnik (2017) and Garzillo (2015).

Senior lefty Luke Rettig (8-2, 2.01 ERA) capped off an impressive season as the ace of the rotation by claiming First Team All-Patriot League accolades. He finished with a league-best 2.01 ERA, 68 strikeouts and eight wins, the second-most by a Lehigh pitcher in a single-season. With a victory over Bucknell this weekend, Rettig has an opportunity to tie Dave Cerminaro for the lead with nine wins in 2002.

Bucknell has had a significant amount of time off heading into the semifinal round this weekend, last playing Army West Point on the road Apr. 30-May 1 to end the regular season. The Bison (19-23, 14-11 PL), the second seed in the tournament field, dropped two out of three games to the Black Knights on the road, just after dropping two out of three at home against Lehigh Apr. 23- 24

The Bison have not won a weekend series against a Patriot League opponent since taking two from Lafayette Apr. 9-10.

Cannizzaro has been a great asset to the Bucknell offense over his career and this season, he finished third in the league in batting average (.350), fourth in slugging (.552), fourth in doubles (12), seventh in home runs (5) and ninth in on-base percentage (.414).

A model of consistency on the field, Tyler Dunn leads his Bison teammates with a reached base streak of 14 straight games.

The Mountain Hawks are 3-2 all-time against Bucknell in the Patriot League Tournament, but have never won a tournament game in Lewisburg, going 0-4.

All-time in the Patriot League Tournament under head coach Sean Leary, Lehigh is 15-19 and are looking to punch his ticket to the Championship Series for the second straight season and for the fourth time since 2014.