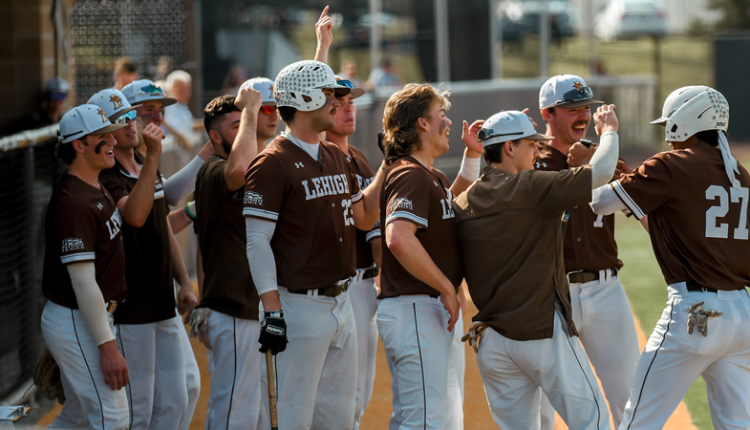 BETHLEHEM, Pa. – Dominating the first game on offense and rallying back to take Game 2 following two straight big innings, the Lehigh baseball team swept Saturday’s doubleheader against St. Bonaventure at J. David Walker Field, taking Game 1 (12-5) and 2 (9 -5). With the two wins, the Mountain Hawks (11-6) have won five straight games, seven of their last eight and are 4-0 at home to begin 2022.

“I think our team showed today that they are fully capable of winning in different ways,” said head coach Sean Leary. “They won from ahead, they won from behind, but I think they had a consistent approach every single inning. We scored in quite a few innings today, there weren’t a lot of zeroes on the board today.

“We strung a couple of those innings together in Game 2 and the kids responded by tying the game up in the middle innings and then pulling away late. Again, I’m just proud of the fact that they don’t really waver. They have confidence that they’re going to come up with a big hit or make a big pitch and I think the one constant that we’ve had all year is the consistency to make big plays out there.”

In Saturday’s opener, Lehigh out-scored St. Bonaventure, 8-1 over the first two innings, scoring twice in the fifth and once in the sixth en route to a 12-5 victory. Carlos Torres earned his first victory of the year, going three innings, allowing four runs on five hits with seven strikeouts. Nick Pave earned the save after throwing four strong innings of relief, striking out four and allowing just one earned run.

St. Bonaventure scored a run in each of the second, third, fourth and fifth innings to take a 4-0 lead through five in Game 2 before the Mountain Hawks responded with eight straight runs between the sixth and seventh innings to get a 9- 5 final over the Bonnies. First-year Jack Hamilton improved to 2-0 on the season after two shutout innings of relief, striking out two.

First year Justin Butler led the way for Lehigh on the day by hitting .571 (4-for-7) with two doubles, a home run and two RBIs against St. Bonaventure. He also slugged 1.286 and reached base at a .625 clip. Rafe Perich hit .444 (4-for-9) with a homer, while Riley Davis hit .429 (3-for-7) with two doubles and three runs driven in. All throughout the Lehigh lineup, hitters were efficient and elite on getting hits and getting on base, with a total batting average of .354 and an on-base percentage of .429.

The Mountain Hawks got things off to a fast start to open the first game of the day, scoring five runs to take a 5-0 lead right off the bat. Lehigh nearly batted around in the first frame, with three RBI singles and a sacrifice fly to get the scoring going. Even after the Bonnies got a run back in the second with a home run, the Mountain Hawks scored three runs in the second thanks to a groundout from Adam Retzbach and a two-run homer to left field off the bat of Perich.

Brendyn Stillman hit a three-run home run in the third inning to cut the Lehigh lead in half at 8-4, but Gerard Sweeney reached on an error to score Andrew Kohl to go ahead, 9-4.

In the bottom of the fifth, Jake Whitlinger and Tyler Young executed a double steal to perfection and both scored when the catcher tried to throw the runner out at second, but overthrew the second baseman as Whitlinger scored on the throw to push Lehigh ahead 11- 4.

Jack Putney cut the deficit to 11-5 on an RBI single to right field in the sixth inning, but Lehigh tackled on another by way of Riley Davis’ RBI double to left center field, enough for Lehigh to hang on, 12-5.

Perich went 3-for-4 with a home run, three RBIs and two runs scored, while Butler and Kohl each picked up multi-hit games.

Moving ahead to Game 2, St. Bonaventure attempted to battle back by scoring four consecutive runs between the second and fifth innings. The Mountain Hawks cracked the scoreboard with an RBI single to right center from Casey Rother in the fifth inning, cutting into the Bonnies’ 4-1 lead.

With one out in the sixth inning, Butler started scoring with a home run to center field on an 0-1 count. The long ball marked the first year’s Patriot League-leading sixth of the season after notching a pair Wednesday vs. Saint Peter’s as Butler brought the Mountain Hawks within two, 4-2.

Young drove in Lehigh’s third run of the inning with a single to left field, scoring Davis to make it 4-3. Two more runs came across to score in the inning after Sweeney singled to left field, giving the Mountain Hawks their first lead of the game at 5-4.

Lehigh got four crucial insurance runs in the bottom of the seventh inning starting with Davis’ two-run double to left field, scoring both Butler and Perich. An Andrew Nole triple to center field brought in Davis, as Lehigh took an 8-4 advantage.

Young’s SAC-fly added one more for the Mountain Hawks in the seventh, scoring senior Austin Dambach, who pinch ran for Nole at third base.

Matthew Williams got one more for St Bonaventure in the eighth, but it wasn’t enough as the Mountain Hawks shut the door in the ninth to prevail, 9-5.

Perich, who came in to pitch from being over at third, closed out the game in his fourth appearance of the season, going 1.1 innings and surrendering one walk with a strikeout.

“It’s cliché to say, but we haven’t won anything tomorrow yet,” said Leary. “We’re excited to have the opportunity to extend this streak, but teams that want to win in our league learn how to win the third and fourth games in a series.

“That’s our mindset for tomorrow. We need to go out and play our game. We know their [St. Bonaventure] energy is going to be high, they have a few losses in this series so we need to come out ready to go early. But I think we are seeing each game that we have a different guy or different way to win and that’s really what coaches look for.”

Lehigh will attempt to finish off the four-game sweep of St. Bonaventure and run its win streak to six straight against the Bonnies Sunday afternoon at noon from J. David Walker Field at Legacy Park. The Mountain Hawks will be looking for their first six-game win streak since Apr. 14-24, 2019.