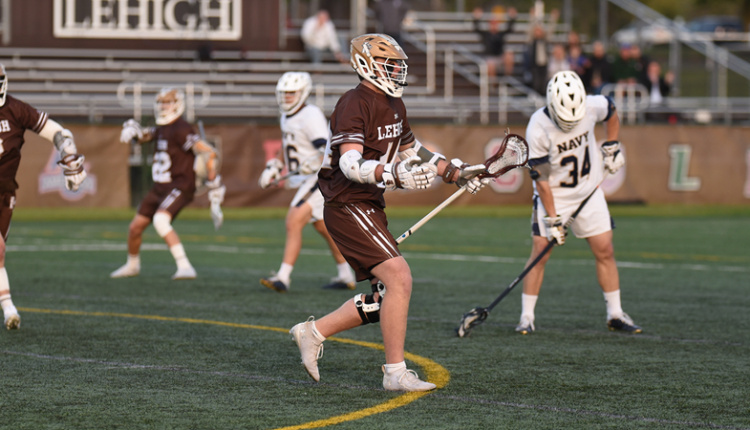 BETHLEHEM, Pa. – The Lehigh men’s lacrosse team rebounded from three straight defeats to end the regular season in a big way against Navy Tuesday and look to ride that momentum into Boston on Friday. The fourth-seeded Mountain Hawks will face the top-seeded Terriers in the Patriot League Semifinals at 4 pm on CBS Sports Network. Lehigh and Boston University will meet for the second time in two weeks, as the Mountain Hawks hope to avenge a heartbreaking, last-second 9-8 defeat at home on Apr. 23.

In that game, Lehigh scored with 2:26 and 1:04 remaining in regulation, but BU’s Timmy Ley scored a highlight-reel goal, which was the game-winner with five seconds remaining, to clinch the regular season championship and hosting rights for the semis and final. That was the second of the Mountain Hawks’ three one-goal losses to end the regular season (also falling at Colgate and Loyola in overtime), but Lehigh rebounded with arguably its most complete game of the season on Tuesday. The Mountain Hawks jumped out to a 4-0 lead against fifth-seeded Navy in the quarterfinals, and would lead by multiple goals the rest of the way. A 5-0 second-half run turned a 9-6 lead into a 14-6 advantage, erasing any doubt.

Senior Tommy Schelling led the offense with four points and four assists; his eight points were one from tying a career high. It was his seventh straight game with 5+ points as he’s 19th in the nation in points per game (4.50) and eighth in assists per contest (2.79). With his eight points, Schelling moved past Jeff Jenkins ’94 into seventh place in program history for career points with 174 (ironically, he’s at exactly 87 career goals and 87 assists). Four other Mountain Hawks scored two goals on Tuesday – junior Christian Mule’ (who also dished two assists), senior Cole Kirst, junior Justin Tiernan and sophomore Scott Cole. Kirst scored consecutive second-quarter goals in the span of 47 seconds to increase a 5-3 lead to 7-3.

Senior goaltender James Spence set the tone early, stopping the first four shots sent his way and six of the first seven. He finished with 13 saves, allowing just seven goals. It marked his sixth straight game with 12 or more stops. In that time, he has 80 saves, allowing just 57 goals, good for a 58.4 save percentage. Making his first start of the season, senior Michael Hagenberger doubled his previous career high for caused turnovers, recording four (after owning eight his entire career entering Tuesday). Senior Mike Sisselberger enjoyed a strong bounce back effort, finishing 15-of-23 with 10 groundballs. He was 12-of-14 in the first half.

Boston University captured the Patriot League Regular Season title for the first time in program history this season, finishing with a 7-1 league record and 10-4 overall mark. The Terriers’ league defeat came last Friday vs. Army West Point, 15-14. The other losses have come against members of the Ivy League – Harvard (13-10), Yale (22-15) and Princeton (12-7). BU responded from the Princeton defeat by winning at Loyola, 14-9. Vince D’Alto leads the Terriers in goals (43) and points (70). He stands 16th nationally in goals per game (3.07) and 12th in points per game (5.00). Timmy Ley, who scored the game-winner against Lehigh in the regular season, isn’t far behind with 36 goals and 27 assists while Louis Perfetto owns 26 goals and 30 assists. Roy Meyer leads the nation in causing turnovers per game (3.07) with 43 through 14 games. Conor Calderone has won 57.3 percent of his faceoffs (213-of-372) with 93 groundballs. That percentage is second in the Patriot League and 12th in the nation. Matt Garber has started all 14 games in goal, tallying a 10.24 goals against average and 54.3 save percentage. Garber was named the Patriot League Goalkeeper of the Year, with Meyer earning Defensive Player of the Year and head coach Ryan Polley picking up Coach of the Year.

Lehigh holds a 7-2 all-time lead over Boston University, with the losses coming less than two weeks ago and in the 2017 Patriot League Quarterfinals. All the games have been extremely close, with the Mountain Hawks’ largest margin of victory coming by four goals. The teams first met in the Terriers’ first season of 2014, a 10-7 final. The last meeting prior to this April was in the 2019 Patriot League Semifinals at Loyola, a 10-9 Mountain Hawks’ victory. Friday will mark the third-ever meeting in the Patriot League Tournament and second in the semifinals.

If the Mountain Hawks win on Friday, they would advance to Sunday’s Patriot League Championship Game to face second-seeded Army or third-seeded Loyola at 12 pm on CBS Sports Network. The entire weekend (both semifinals and the title game) will be played at Boston University’s Nickerson Field.

Affordable for whom? The cost of child care in Pa. | The Numbers Racket