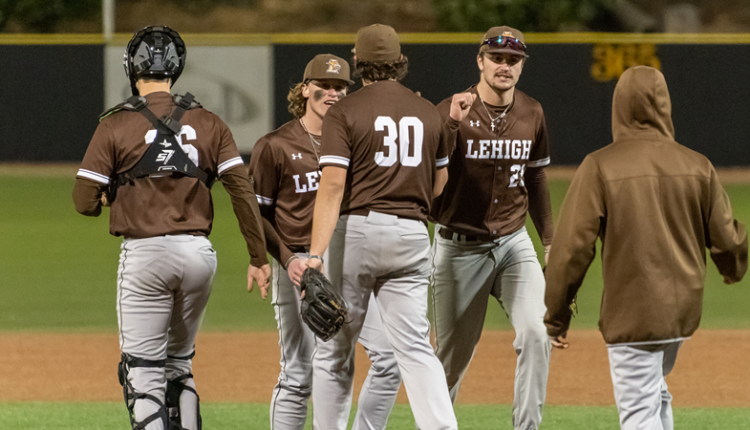 BETHLEHEM, Pa. – The Lehigh baseball team continues its 2022 season this weekend, heading to Colonial Heights, Va. to take on Mount St. Mary’s for a four-game neutral site series with the Mountaineers – two games on Saturday beginning at noon and two games on Sunday at the same time. The Mountain Hawks (1-2) won their opener at Davidson last Friday in 5-0 shutout fashion before dropping the final two games of the series despite a late-inning comeback attempt in Game 3 Sunday.

The Lehigh offense was led by first year outfielder Jake Whitlinger who hit .545 (6-for-11) with three walks for a total of 10 times reached base as the lead-off man, slugging .545 with a .667 on-base percentage. He was named Patriot League Rookie of the Week in the first edition of the award for the new season.

The Mountain Hawks also had a strong contingency from two additional first years in infielder Rafe Perich and outfielder Andrew Kohl, who began their collegiate careers with batting averages of .385 and .500 respectively. In the final game Sunday, catcher Justin Butler made his Lehigh debut to a tune of a 3-for-5 afternoon with a double, a grand slam home run and four RBIs.

Reigning Patriot League Player of the Year Casey Rother impressed in his first weekend back with the Mountain Hawks, batting .385 with five hits, three RBIs and just three strikeouts.

On the mound, senior left-hander Luke Rettig made his 2022 debut in style, earning the victory after throwing four shutout innings with just two hits given up and four strikeouts. Junior righty Will Grisack also looked impressive with his three shutout innings of relief to earn the save with three strikeouts, while Tyler Thompson set-up Grisack with his pair of shutout frames and three punchouts.

Mount St. Mary’s will open its season on Saturday with the Mountain Hawks after going 9-28 overall with a 5-19 record in NEC play during the course of 2021. The Mountaineers are led by first-year head coach Frank Leoni, who brings three decades of coaching experience with past stops at Rhode Island, William and Mary and Marymount.

The Mount has an even split of returners and newcomers with returners Ryan Fisher, Thomas Bramley and Brady Drawbaugh to the fold. On the mound, expect to get looks at Bryant Shives, Ryan Ament and Luke Pryor. Transfers include Cooper Adams (UMBC), Tristan McAlister (JUCO) and Aiden Tierney (Longwood).

Lehigh has a 6-5 edge in the all-time series with Mount St. Mary’s, claiming two of the three matchups back in 2019. The Mount won the opener by a score of 8-6.

There will not be a live stream of this weekend’s stream, nor will live stats be provided. Keep a look-out on Lehighsports.com at the end of the day for updates regarding the scores of the games and follow Lehigh Baseball on Twitter @LehighBaseball.