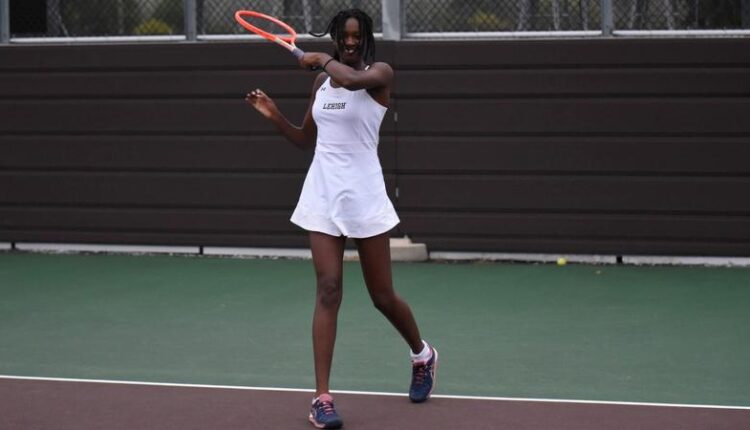 BETHLEHEM, Pa. – The Lehigh women’s tennis team picked up its first win under head coach Olivia Leavitt on Saturday afternoon. The Mountain Hawks wrapped up their fall season with a 5-2 victory over Monmouth on the Ulrich Varsity Courts.

Lehigh opened up the match by sweeping doubles to take the early 1-0 lead. Senior Junmoke James and sophomore Allyce Gaborik picked up the first win of the match, defeating Monmouth’s Lauren Laundstrom and Ann Spurka 6-4 in the third flight.

Juniors Megha and Anushka Dania clinched the doubles point for Lehigh on Saturday afternoon. The Dania duo defeated Zoe Klapman and Jordyn Pax 7-5 at the No. 1 spot. To close out doubles play, sophomore Hamsa Javagal and first-year Avery Hopkey picked up the 6-4 win at the No. 2 spot.

James was the first Mountain Hawk to earn a win during singles play. The senior defeated Lenien Jamir 6-1 in the first set and was leading 2-1 before Jamir retired.

Javagal was the second member of the Lehigh women’s tennis team to pick up a win during singles play. Javagal defeated Klapman 6-4, 6-1 at the No. 1 spot to extend Lehigh’s lead to 3-0.

Megha Dania clinched the win for the Mountain Hawks on Saturday afternoon. Dania defeated Jordyn Pax 6-2, 6-1 at the No. 4 spot. Anushka Dania was the final member of the team to earn a win against Monmouth. The junior defeated Lana Brezanin 6-4 in two sets in the fifth flight.

Saturday’s match against Monmouth marks the end of Lehigh’s fall season. Complete results can be found below.