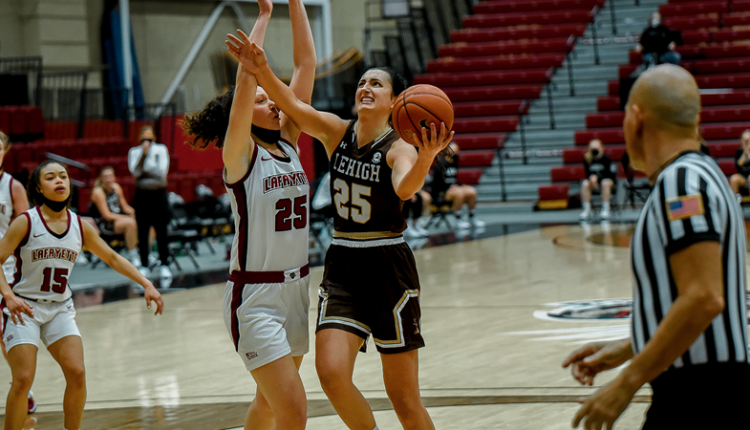 BETHLEHEM, PA. – For the first time since 2010, the Patriot League will compete and be represented in the NCAA tournament. The 13th Lehigh women’s basketball team will take on West Virginia at the Bill Greehey Arena on Sunday at 8 p.m. on the St. Mary’s University campus in San Antonio. The matchup will be broadcast live on ESPN U with internet audio on Lehighsports.com with Matt Markus (PxP) and Steve Lomangino (Color).

For the first time in 11 years, the Lehigh is playing on the national stage. The Mountain Hawks won their fourth Patriot League championship in program history on Sunday afternoon, defeating Boston University (64-54) on the road at Case Gym.

The second wing, Frannie Hottinger, was excellent again against the Terriers, scoring 21 points with four rebounds on 9-of-14. The junior striker Emma Grothaus continued her excellent tournament with 12 points and eight rebounds in 36 minutes and currently scores a double-double (14.3 ppg, 9.7 rpg) on ​​average in three postseason games, which the MVP- Awards from the Patriot League tournament.

Junior guard Megan Walker stepped down the track and eventually helped Lehigh get the game out of reach with 10 points, two steals, and a pair of rebounds and 3 pointers. Senior guard Mary Clougherty played 29 minutes off the bench with seven points and six rebounds, while freshman Jamie Behar contributed eight points and four boards.

While the team shot 41.1 percent (23:56) off the field in the competition, the 3-point shooting wasn’t really a factor, just like against Bucknell, as the Mountain Hawks were only 30.4 percent (7:23) off the field shot beyond the bow.

On the defensive, Lehigh kept Boston University in check as the Terriers shot 32.9 percent (23:70) from the field and only 20 percent (5:25) from outside the arc, and only three shots reached the free-throw line.

The Mountain Hawks are four straight game winners, based on a win on February 22nd at Lafayette to end the regular season. Lehigh starts 3-0 in March and has won nine of his last ten games of the month in the last three seasons.

No. 17/20 and West Virginia in fourth place had an extremely solid season up to this point and left with a 21: 6 record after a loss in the Big 12 Championship Game to No. 5/6 Baylor (76: 50) in the NCAA tournament on Sunday afternoon.

The climbers had taken two Big 12 tournament wins against Kansas State and Oklahoma State en route to the finals.

But the offensive has been a problem for Mike Carey’s squad lately. He scored 70 or more points in six of the last eight regular season games en route to the Big 12 tournament, but did not register 60 in all three tournament competitions.

Like the Mountain Hawks, West Virginia has three players who averaged double-digit results, led by Kysre Gondrezick (19.9), Esmery Martinez (13.6) and Kirsten Deans (13.6). Martinez averages a double-double at 11.7 rebounds per game, while Gondrezick has averaged 2.8 rebounds, 4.5 assists and 1.6 steals per competition so far. The Redshirt senior was most recently awarded an All-America Honorable Mention by the Associated Press. With 982 career points, it is only 18 out of 1,000.

The first round matchup of the NCAA tournament with the mountaineers is only the second ever matchup between the two programs. The first meeting of the two programs took place on December 27, 1999 at the Tulane / Doubletree Classic in New Orleans.

The Mountain Hawks (5-6) halfway through at 13 and never looked back to claim an 89-73 win over WVU (4-4). Four players posted double-digit results, with Anne Tierney and Danielle Baldwin on top with 22 points, while Sara Hessel added 18 points and Gina Zang brought in 11 points.

Sue Troyan was the team’s head coach in just her fifth season at the top of the program.

The Patriot League is 1-27 in NCAA tournament games and falls in 26 direct competitions since Holy Cross won Elf-Seed against Maryland in 1991, the very first year of women’s basketball in the Patriot League.

A win over West Virginia on Sunday would not only mark the Mountain Hawks’ first NCAA tournament win, but also only the seventh No. 13 seed in NCAA tournament history and the first to cause a stir since Marist in 2012 .