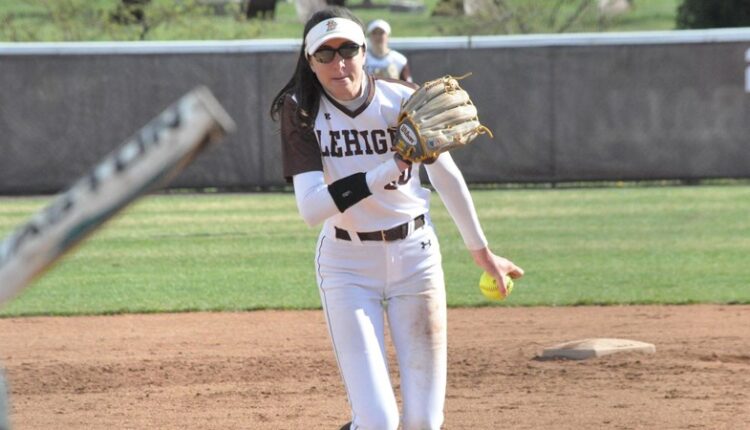 BETHLEHEM, Pa. – Lehigh improved to 6-0 in Patriot League play with a doubleheader sweep of Holy Cross Saturday at Leadership Park. The Mountain Hawks fell behind early in both games but battled back, taking the opener 4-1 and the nightcap 5-3.

Senior pitcher Gabriella Nori had a strong day, earning a win and a save in the circle, allowing just one run over 9.2 innings of work with nine strikeouts. Junior Emily Cimino went 4-for-8 with an RBI and two runs scored to lead the Lehigh offense. The Mountain Hawks are now 15-12 overall and have won 10 of their last 11 games.

Lehigh tied the game on an unearned run in the bottom of the second as first-year Rory Dudley scored when senior Addie Kittel reached on a throwing error.

Holy Cross’ Kelly Nelson held Lehigh without a hit through 3.1 innings before senior Karsen O’Rourke singled through the left side in the fourth inning. Two batters later, Kittel belted a mammoth two-run home run down the left field line, which gave the Mountain Hawks a 3-1 lead.

Lehigh added one more run in the fifth as senior Carley Barjaktarovich walked, stole second and then came around to score on a Cimino single.

Nori retired the final eight batters she faced, working out of a two-on, no-out jam in the fifth by getting a 5-3 double play and then a ground out to shortstop. She allowed a run on five hits with six strikeouts and no walks to improve to 7-6 on the season.

Nelson limited Lehigh to five hits and struck out 10 on the losing end for Holy Cross.

— Lehigh Softball (@Lehighsoftball) April 10, 2022 The Crusaders started almost in game two, scoring three runs in the top of the first, all of which came with two outs. Erin Bengston singled home two runs and then Callie Thibault drew a bases loaded walk to put Holy Cross up 3-0 before Lehigh came up to bat.

In the bottom of the first, Lehigh loaded the bases as the first three batters in the lineup reached on singles. Holy Cross picked up the first out on a force play at home. Sophomore Brooke Cannon then reached on a fielder’s choice and picked up an RBI when Holy Cross failed to get an out at third base on a ground ball to shortstop. O’Rourke grounded into a force play to bring in Lehigh’s second run and then sophomore Amanda Greaney put Lehigh in front for good with a double off the fence in straightaway center field, which put the Mountain Hawks ahead 4-3 after one inning.

The only other run in game two came in the fourth inning, when Cimino singled with one out and then scored when Dudley reached on a throwing error.

Sophomore Katelyn Young navigated a no-out, bases-loaded jam in the fourth inning, getting a force play at home and then a 4-3-2 double play on a hard liner out to O’Rourke at second base to keep the Crusaders off the board.

The Crusaders loaded the bases again with one out in the fifth and Nori came on in relief to strike out Peyton Morehouse, and then got Jessica Mott to fly out to right to end the threat.

Holy Cross threatened again in the seventh, loading the bases with one out behind two singles and Nori’s only walk of the day, but Nori battled back, getting Morgan Jensen to foul out to Dudley at first before striking out Mott looking to secure the doubleheader sweep .

Young allowed three runs on 11 hits in 4.1 innings with three walks and a strikeout. Nori allowed just the three seventh-inning base runners in 2.2 innings of relief with three more strikeouts.

Lehigh finished with 10 hits off of Megan Yurchick and Nelson with Cimino and senior Jaelynn Chesson both going 3-for-4 in game two.

The Mountain Hawks and Crusaders will wrap up their three game series with a single game Sunday at noon.