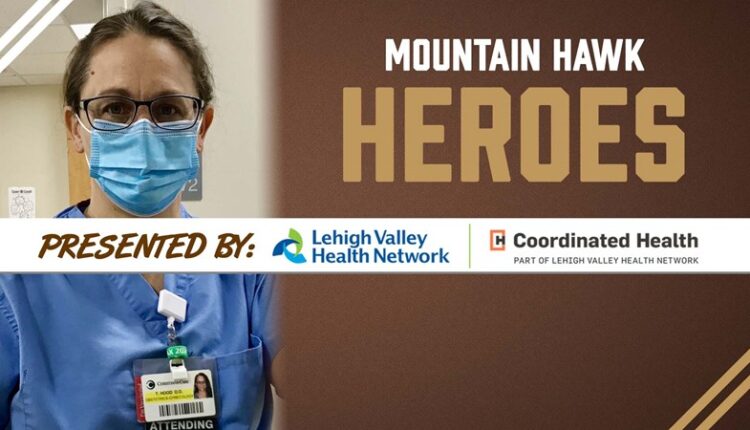 Every Wednesday Lehigh Athletics, Lehigh Valley Health Network and Coordinated Health are proud to recognize a Mountain Hawk Hero – someone who is connected to Lehigh Athletics and who makes a difference in the medical field. Today it continues with athletics alum Tara Santoroski Hood ’00.

After graduating from Lehigh, Tara Santoroski Hood went into research but realized it wasn’t for her.

“I really wanted to work with people, do medicine, and help the community,” said the former Patriot League champion and a member of the Patriot League’s all-decade track and field team. “I was in my mid-twenties when I decided to put together my medical applications.”

Hood is now an obstetrician-gynecologist at ChristianaCare in Newark, Delaware.

“I spend much of my day doing obstetrics, giving birth to babies, and caring for women who are pregnant during pregnancy,” she said. “I also perform general gynecology, which is routine women’s health care.”

Although Hood’s path to medicine was not a straight one, it had been in the back of her mind for a while.

“Ever since high school, I’ve always thought it might be interesting,” said Hood, who majored in biology. “When I was working in a laboratory (after Lehigh), I realized that research without a patient component was not for me. I really wanted to do hands-on care and work with people. I was determined to do whatever I had to do to get medical school. “

At one point during the research, Hood’s eyes opened to the practice of medicine.

“I was doing data analysis on one of the studies I was working on,” she said. “I spoke to a nurse who said there were twins in the study. The conversation turned out to be a heartfelt story.

“I thought… what am I doing? Here was the nurse who looked after patients and babies directly.

From there, Hood attended the Philadelphia College of Osteopathic Medicine, and eventually completed her residency training at Lankenau Hospital on the Philadelphia Main Line in 2013 (and she has been practicing since then).

“Office days usually consist of routine care,” she said. “Rarely do you have an emergency situation. Hospital days can include anything from giving birth to babies with no health problems to mothers who need emergency surgery because of fetal ailments or bleeding and life-threatening emergencies very quickly.”

As a former sports student, Hood is used to pressure situations (although the pressure is at a much higher level in her current role).

“It’s important to stay calm in an emergency,” she said. “People worry. Families are giving birth to a new baby. They want everything to be perfect. Calming a patient down and trying to make him as perfect as possible, even when things don’t go right, is always one Challenge.”

As an outstanding achiever, Hood has always strived for perfection and learned so much from her experience as a student athlete.

“Of course the trail teaches perseverance,” she said. “Being a student athlete is a lot of work. The structure and rigor helped me during my school days and in everyday medical practice. Only the thought of persevering and never giving up always comes into play from you. “

Another way Lehigh helped was by being part of a large team.

“It’s easy to fall into a group of students in college,” Hood said. “But in athletics you are exposed to a whole range of people. In athletics, men and women compete together; You are exposed to a more diverse group. You interact with engineers, industrial engineers and other students throughout the university. “

Learning how to work with so many people now only helps Hood with their job in a very team-oriented environment.

“There are usually about four or five doctors on a shift at any given time,” she said. “I take care of my patients and other doctors take care of their patients. But at the same time we’re all in it together.

“When an emergency arises, we help each other,” Hood continued. “You jump in right away and ask what I can do to help my colleague make sure everyone is getting the care they need and that we are all working as a team?

“I definitely think when I’m in the hospital there is an incredibly strong team dynamic of support.”

The greatest emergency, a one-off global pandemic, has affected Hood’s role. If anything, the COVID-19 pandemic actually compounded why it came to obstetrics in the first place.

“When I made the decision to take the obstetrical route, I had a strong feeling at that time in my life that women were not being cared for and taken seriously from a health perspective,” said Hood. “I thought women had to be there for other women.”

Hood was always there for her patients, especially during the pandemic.

“Women don’t get that much support,” she said. “Hospitals don’t allow them to have more than one visitor at a time. For a while, their spouses were not allowed to come with them on their visits. This meant that women needed regular advice and support. Not only medically, but there is also someone out there who is caring and listening because it’s scary to go into something like that, to feel alone. “

“The patients felt much more vulnerable and even more needed someone to look after them.”

Because she cares, Hood couldn’t be happier that she switched to medicine.

“You help people, and that at times when they really need the support,” she said. “It really pays off in everyday life.

“I will be part of the most important days of people’s lives and bring new life to their world,” Hood continued. “It’s exciting and rewarding.

“Everyone remembers the day their child was born and I feel privileged to be a part of it.”