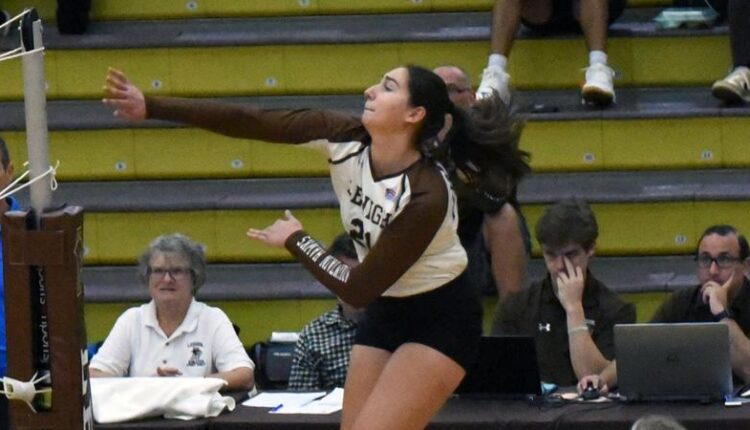 Luscomb Tabbed as Patriot League Rookie of the Week

Luscomb tallied 20 kills for a hitting percentage of .368 and seven blocks during the Mountain Hawks 1-1 week in Patriot League competition, playing all seven sets.

In Lehigh’s win versus Loyola, Luscomb recorded nine kills with no errors for a hitting percentage of .529 while also making five blocks in the match. She reached double-digits in kills in Lehigh’s match against Colgate on Saturday with 11 kills to share the team-high. She added two blocks on the night as well.

Also on Tuesday, sophomore Emily Stewart was named an honorable mention for her performances against Loyola and Colgate. Stewart totaled 18 kills with just three errors for a hitting percentage of .481 for the week. She also contributed 12 blocks in two matches at home.

In Lehigh’s 3-0 victory over Loyola, Stewart led the squad with seven blocks and recorded seven kills as well. She had a hitting percentage of .462. Then, in the Mountain Hawks 3-1 loss to Colgate on Saturday, she shared the team-high in kills with 11 and a .500 hitting percentage. She was credited for five blocks in the match.

Lehigh (11-9, 2-6 Patriot League) has only one contest this week, traveling to Baltimore to take on Loyola (6-9, 4-4 Patriot League). The match is scheduled to begin at 4 pm on Saturday and will be streamed on ESPN+.