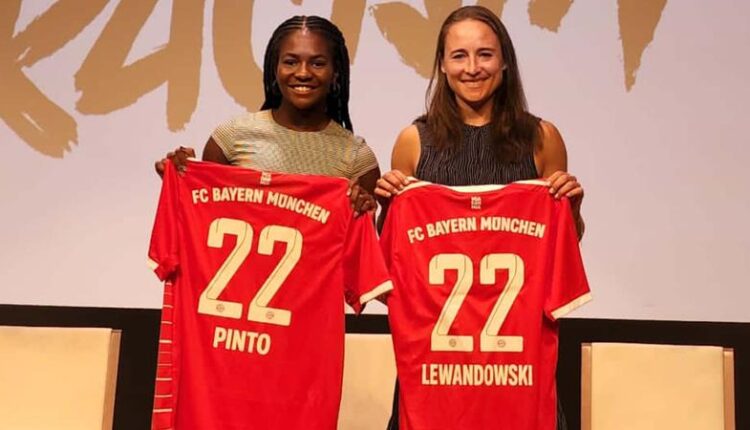 Lewandowski Participates in “Reds Against Racism” Roundtable Through Former Club

In late July, Lewandowski joined Bayern Munich in its Reds Against Racism initiative. The special roundtable was held at the National Museum of African American History and Culture in Washington, DC

“They were coming to DC for the Audi Tour and I had contact with a few people at Bayern Munich – and through the New York office as well,” said Lewandowski. “They reached out to me about a week beforehand asking if I would like to come down and speak on the panel, that they were collaborating with the museum, as well as some local leaders down there, ex-pros and current athletes. It was exciting to get the invite and just be a part of such an important initiative they started.”

“Bayern Munich started the campaign ‘Reds Against Racism’ last year just to raise awareness and start conversation around this huge topic that has been going through our sport and our society about racism and all forms of hate,” said Lewandowski. “Finding ways to eradicate all forms of hate within sport and ultimately within society. Bayern Munich is a club that wants to make this world a better place and really just bring up topics that are pressing in our society, speak about change and implementing different ways that we as an organization, as a sport, can come together to help the greater good of society.

“I feel so passionate about the same thing and using our platform to reach out and raise awareness of how we as individuals, athletes, managers and leaders can help fight for change and eradicate all kinds of hate in sport.”

Lewandowski has a wide breadth of experiences, most recently retiring from Gotham FC of the NWSL. The league’s players are coming off an influential year, when they created a Player’s Association.

“Officially, the players had a union and created a collective bargaining agreement with the league,” she said. “That gave us some stability, protection and rights moving forward to push for what women want, need and deserve to make the workplace a better, safer environment for us women.”

That’s just the beginning of the change.

“They implemented this anti-harassment policy as well, which has given players a little more protection and opportunity to play at a level they can without feeling victimized or coming into any form of harassment or discrimination,” said Lewandowski. “Everybody has an equal opportunity to play this sport. Gotham FC has taken a lot of steps to push that as well. There is a Black Women’s Player Collective that our league also started to help raise awareness and support Black women within the league.”

“So we did a lot more within the community,” said Lewandowski. “Each month, the players come together and put on some community service events and just be influential people within society.”

As Lewandowski shared, it’s important to normalize tough conversations, speak up and support each other.

“A lot of individuals have endured challenges of racism or forms of discrimination that haven’t been very obvious, vocalized or seen,” she said. “Each individual experiences it in his/her own way. It’s important that we as athletes check in with each other, sharing our experiences to see if this is a normalized behavior. It’s about treating each person with respect and equality, and including everybody for who they are, what they believe and how they want to be perceived within the group.”

A core part of Lewandowski’s message on July 22 was that athletes are role models.

“People look up to us,” she said during the round table.

Lewandowski went on to call for athletes to set an example of tolerant coexistence.

Something else she touched on was women getting into coaching roles – something she did in joining the Mountain Hawks’ staff this fall.

“There are many forms of hate,” said Lewandowski. “There’s racism and discrimination, and equality with men and women getting into a sector (like the coaching industry). It’s important to have more opportunities for women as well, to get that education and get into that coaching environment to be role models for the next generation of women and girls growing up.

“When girls see a female coach or a female leader, it inspires them to see that path they can potentially also take when they get older.”

Lewandowski is one of those role models, and leaders, paving the path forward.

Tecumseh, the war for the Northwest Territory, and how it changed the nation | Opinion

As the Deadline Creeps Up, Submit Your Scariest Halloween Health Haikus