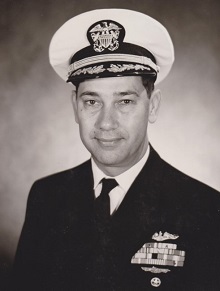 WILLIAMSBURG – Retired US Navy Captain Leon Herbert “Lee” Rathbun, 100, passed away Monday June 21, 2021. He was born in Portsmouth in 1921 and later moved to East Aurora, NY in 1938 and then attended Lehigh University for a year . In 1939 he was appointed to the Naval Academy. In 1942 he completed his studies with the upper class from 1943.

His first assignment at DMS Wasmuth was almost his last. During her escort service in the North Pacific, Wasmuth was sunk in a violent storm near the Aleutians in December 1942. Miraculously, another ship in the convoy saved all hands. After a much-needed survivor leave, Lee reported to the destroyer Halford in Bremerton. Halford saw much action over the next two years as he operated with carrier task forces in the central and later the Southwest Pacific.

In April 1944 he volunteered for submarine service and graduated from the Submarine School in New London, Connecticut in June. At the time, he married his fiancée Mary Ross Holts, who was traveling around the country from Seattle to meet him. Lee next reported to Blueback (SS-326) and undertook three war patrols in the Java and East China Seas, operating out of Perth, Australia and Subic Bay, Philippines. For his performance as a torpedo officer on these patrols, he received the Navy Commendation Medal.

When the war ended in August 1945, Blueback and several other submarines were ordered to stay in Guam for five months. They finally returned to San Diego in January 1946 and Lee had a happy reunion with Mary Ross after 18 months of separation. After a brief vacation, Lee was assigned to Entemedor (SS-340). He served as an engineer officer and later as a navigator on a six-month deployment in the Western Pacific. This included a month in Tsingtao, China, which at the time was surrounded and besieged by communist forces.

In 1948 he applied and was selected for graduate school and earned an MS in electrical engineering. He then became Executive Officer of Carp (SS-338) in San Diego, followed by staff duty at Submarine Squadron One in Pearl Harbor. In February 1953 he took command of Bugara (SS-331). Bugara then operated from Yokosuka, Japan and carried out surveillance patrols in the North Pacific.

In 1955 he returned to New London and was successively Executive Officer of the submarine tenders Nereus and then Fulton. Next he was in command of U-Boot-Division 82 and later became director of the advanced training at the U-Boot-Schule. In 1961 he was selected for training in nuclear power and reported to the AEC Marine Reactor Division in Washington. In 1962, he was assigned as the first commanding officer of the Thomas Jefferson (SSBN-618) nuclear submarine under construction in Newport News. He took the ship into service in 1963 and undertook three strategic patrols as commander.

In 1965-66 he attended National War College and then returned to New London; this time as the officer in charge and later as the commander of the submarine school. During this period, 1966-68, the submarine force was growing rapidly and the school had to expand proportionally to meet the need for more trained submarine operators in the force. For his leadership and direction during this time he was later awarded the Legion of Merit.

Lee retired in 1970 and began a new career as a professor of mathematics at Miami-Dade Community College. He was then chairman of the mathematics department and then deputy dean of the natural sciences department, which comprised the departments of mathematics, chemistry, physics and biology.

Lee and Mary Ross lived in Miami and enjoyed cruising Biscayne Bay and the Florida Keys in their 10-foot sloop. Lee also volunteered in tax advice and literacy training. After surviving Hurricane Andrew in 1992, the Rathbuns decided to move north and happily found a home in the Patriots Colony in Williamsburg. Both were still active as volunteers at Colonial Williamsburg, as drivers for “Meals on Wheels” and in St. Martin’s Episcopal Church as well as in many activities in the Patriots Colony.

In May 2021, Lee lost the love of his life, Mary Ross. His sons Scott (Janet) and Ross (Melanie); as well as his granddaughter Meghan survive him.

Offer your condolences to the family online at the Nelsen Funeral Home.

Always be informed. Click here for the latest news and information in your inbox