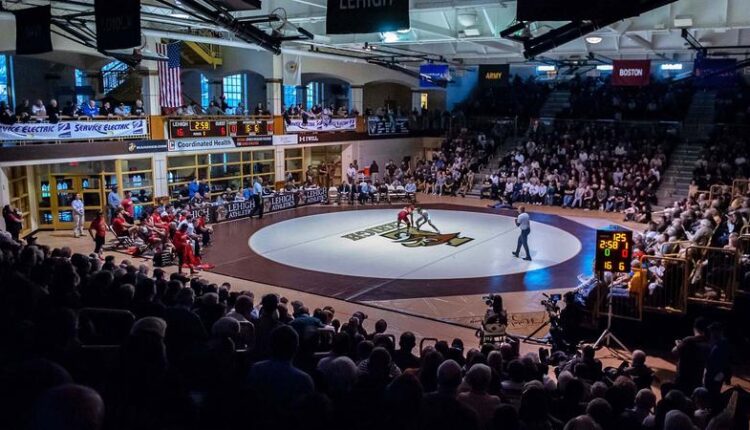 BETHLEHEM, Pa. – Lehigh announced its 2022-23 wrestling schedule Wednesday. The Mountain Hawks will host six home duals and will wrestle at least four duals against teams that finished in the top 15 at last year’s NCAA Championships, with three of those four duals at home.

Season ticket renewals were sent out earlier this week with new season tickets set to go on sale on Wednesday, Sept. 28. Mini-plans and single match tickets will go on sale Oct. 5. Tickets can be purchased at LehighTickets.com or by calling 610-7LU-GAME during normal business hours.

Fans will get their first look at the 2022-23 squad with the annual Brown and White meet, set for Friday, Oct. 28

Lehigh’s first regular season duals will be in Bethlehem. The Mountain Hawks will open the season against Oregon State on Saturday, Nov. 5. The dual opener will be held in Stabler Arena as the Lehigh volleyball team will be playing its final regular season home match in Grace Hall that afternoon. The Beavers finished 12th in Detroit last March. Lehigh will make its official Grace Hall debut the following afternoon when the Mountain Hawks host their first-ever dual with EIWA member Sacred Heart.

On Saturday, Nov. 12, Lehigh will wrestle the two Division I programs from the state of Oklahoma in two different Bethlehem venues. The Mountain Hawks will begin the day by hosting Oklahoma State inside Leeman-Turner Arena at Grace Hall. The Cowboys’ trip to Pennsylvania also features a visit to Bucknell later that day. Due to circumstances regarding Oklahoma State’s travel plans beyond Lehigh’s control, the dual at Lehigh will be held in the afternoon, unfortunately during the same time period when the Mountain Hawks’ football program will also be home against Colgate. Lehigh tried very hard to avoid internal conflicts when finalizing schedules, however in this case the conflict was unavoidable[JS1] [JS2] .

For the second half of the Nov. 12 doubleheader, Lehigh will make the short trip to Liberty High School where the Mountain Hawks will face Oklahoma as part of Journeymen Wrestling’s WrangleMania. Tickets to the event at Liberty will be sold through Journeymen Wrestling.

Lehigh will make its first road trip of the season on Nov. 19 when the Mountain Hawks visit Pitt.

After taking Thanksgiving weekend off from competition, Lehigh will open December by welcoming defending national champion Penn State for the 110th edition of its most-contested dual series, Dec. 4 at Stabler Arena.

Lehigh’s first five duals of 2023 will be on the road against EIWA opponents. The Mountain Hawks will kick off the new year with the 100th meeting between Lehigh and Cornell, Jan. 14 in Ithaca, NY Lehigh will visit Binghamton the following afternoon.

The following weekend, Lehigh will make a Friday night visit to face Penn at the Palestra and then will wrestle at Navy on Saturday, Jan. 21.

The road swing wraps up with a visit to Columbia on Friday, Jan. 27. Lehigh will then return home to host Arizona State on Saturday, Jan. 28. The Sun Devils finished fourth at last year’s NCAA Championships and Lehigh narrowly missed an impressive upset dual win last February in Tempe, Ariz.

Lehigh’s home finale will be Saturday, Feb. 4 when the Mountain Hawks host Army West Point. The Mountain Hawks will close out the dual season with visits to Bucknell (Feb. 10) and Princeton (Feb. 11).

Penn will host the 119th EIWA Championships, Mar. 4-5 at the Palestra, while the NCAA Championships will be held at the BOK Center in Tulsa, Okla., Mar. 16-18.

The Mountain Hawks’ 2022-23 roster includes three EIWA Champions, 11 NCAA qualifiers and two wrestlers who have been previously recognized as All-Americans. Lehigh is one of just five schools to have a wrestled ranked in all 10 weight classes in InterMat’s preseason rankings.