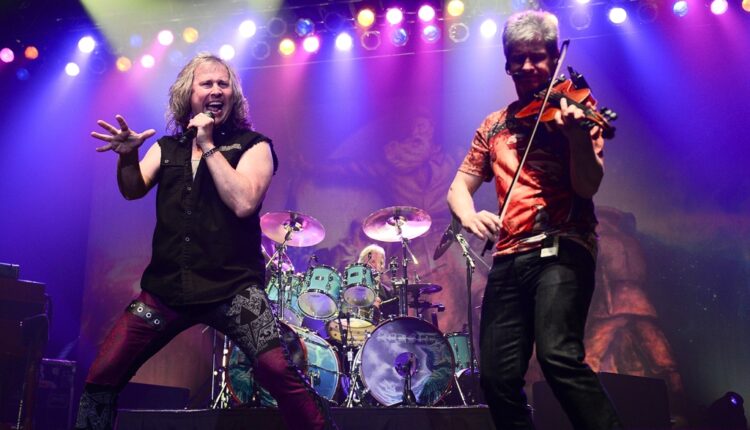 Leftoverture’s 40th anniversary is the gift that keeps giving for Kansas. And its fans.

This week the prog-rock group launches another leg of the tour celebrating the five-times platinum 1976 album, playing it in its entirety, and it will be accompanied by Leftoverture Live & Beyond, a concert set coming Nov. 3, whose version of “Carry On Wayward Son” is premiered exclusively below.

“It was something that we really wanted to have documented,” says drummer Phil Ehart, who along with guitarist Rich Williams remains from Kansas’ original lineup. “You really have to go all the way back to (1978’s) Two For The Show for something like that. We’ve had other live things, but nothing quite like this so we felt it had been a long time.”

The Leftoverture tour has taken on a life of its own for Kansas. The group originally planned for just 10 special shows that would both celebrate the 40th anniversary and also promote Kansas’ 2016 album The Prelude Implicit. By the end of the year, however, Kansas will have played more than 80 dates, which is well beyond what Ehart and company expected. “Yeah, to say it surpassed our expectations is kind of an understatement,” Ehart says with a laugh. “I guess we had forgotten what a gigantic album that was, and how popular it was. When we had a chance to do it in its entirety the Kansas fans really came out in full force, and there were a lot of people who were just Leftoverture fans; Because of ‘Wayward Son’ it was the only album of ours they ever owned. So it really became a lot more than we expected.”

The show also changed the deployment of “Carry On Wayward Son.” As the album’s opening track it’s been performed closer to mid-show rather than as the finale it had become in Kansas’ repertoire.

“That did kind of catch us off guard, like, ‘Hey guys…'” Ehart recalls. “We had to re-learn it because it has a different ending now than we were doing live, when we had a really long, extended ending for the end of the concerts. So we had to go back and put the ending from the record on it, but it worked out fine and we have it set up very special in the show itself. It worked very well.”

Leftoverture Live & Beyond, produced by original Leftoverture producer Jeff Glixman, features 11 other songs, including a selection from The Prelude Implicit as well as other Kansas favorites such as “Icarus,” “Point Of Know Return,” “Paradox,” “Journey From Mariabronn” and “Portrait (He Knew).” There’s more new material on tap as well; Ehart reports that Kansas is “just sketching out new songs right now” for a fall 2018 release, and next year’s tour will support that as well as feature 1977’s Point Of Know Return album in its entirety.

“We’ll probably start recording in January and February,” Ehart reports. “We’re finding that putting a little bit of the new album in (to the show) and a lot of deep cuts and then playing a whole album comes out really well. The fans really like a touch of the new and a bunch of the old, and we’re sure they’ll like hearing Point Of Know Return just like we did with Leftoverture.”

U.S. House stuck for a third day as Republicans struggle to unite around a speaker