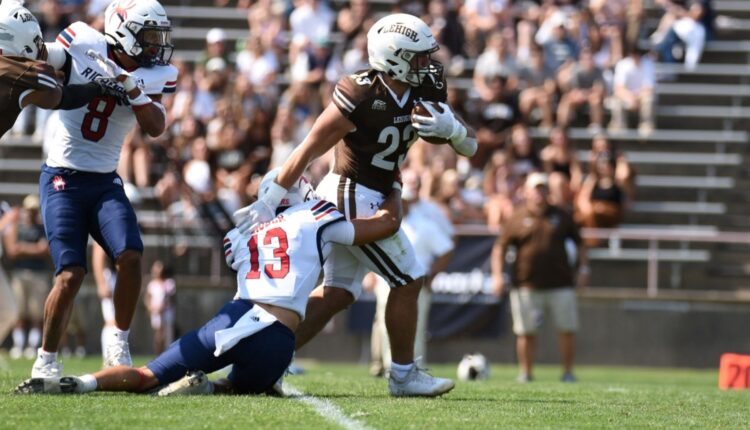 Lehigh sophomore starting running back Gaige Garcia is balancing football and wrestling with hopes of having successful seasons in both.

In high school, Garcia set Pennsylvania state records in football. From 2016 to 2019, he scored the most career rushing touchdowns in state history, with a total of 138, and total touchdowns, with 159. Garcia also holds the state record for most total career points scored with 954.

Garcia was also a four-time state place winner and two-time state champion in wrestling. Lehigh wrestling coach Pat Santoro said he was in on Garcia early, trying to recruit him during his freshman year of high school.

“We were really excited when we heard Lehigh was in the mix because he was one of the top recruits coming out of the country,” Santoro said.

Garcia was recruited for both football and wrestling at Lehigh and the University of Michigan, ultimately committing to Michigan.

“In high school I struggled a lot (trying) to choose one sport,” Garcia said. “I thought I could excel in both of them, so I thought why not give both a try?”

Garcia said he did not fit in as well as he expected to at Michigan and decided to enter the transfer window. He said, having been scouted by Lehigh in high school, it was an obvious choice for where he would spend the rest of his college career.

But Garcia’s first year at Lehigh ended early. He injured his foot in the fourth week of the football season and required surgery. He said it was a heavy setback that had him on the bench.

“He missed the rest of the year, and he missed the wrestling season, as well,” Gilmore said. “He wasn’t really ‘full go’ until late in the spring of this year.”

Garcia has faced hurdles while playing both sports, but he said these struggles give him more determination to get through it.

He said football and wrestling are hard sports to play in the same year, as the seasons are back-to-back and the sports require being in shape in different ways.

With the physical requirements being different, Garcia said it was important for him to be working out as much as possible during the offseason. Doing so has also helped with his foot injury.

“In the summer, I was bouncing between football lifts and football workouts and then going straight to wrestling,” Garcia said. “I would be doing four, and sometimes even five, workouts a day.”

Garcia ran for 67 yards on 8 carries and scored a touchdown against Georgetown in his second game of the season on Sept. 10.

He said he doesn’t plan to stop there. The wrestler running back has his goals set high for what he plans to achieve this upcoming season for both sports.

“The goal is to win it all in both sports,” Garcia said. “For football, I think it is very realistic to win the Patriot League title, and for wrestling, All-American, if I can get down to weight and be able to get into the lineup.”

Santoro said Garcia’s drive for success has had a positive impact on the team environment, as he pushes his teammates and is well liked.

The Lehigh football team will play its next game against the Princeton Tigers away on Sept. 24th at 3 pm The men’s wrestling team begins its season on Oct. 28th.