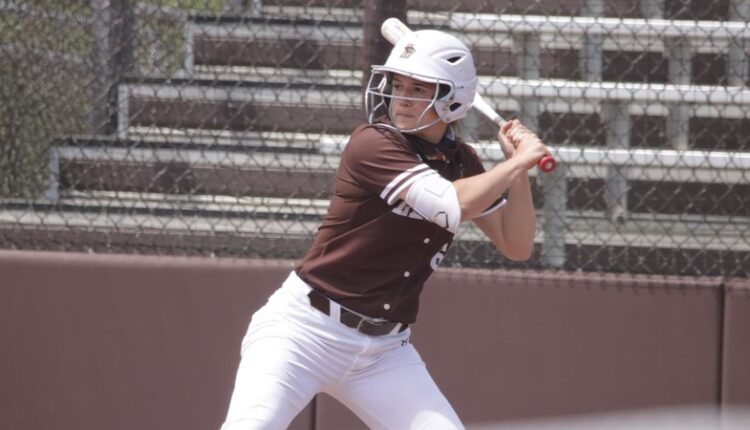 Cimino’s Heroics Lift Lehigh Past Colgate, Into Championship Round of PLT

BOSTON – After Lehigh made the season finale, Emily Cimino drilled a double left midfield in the second round and brought home the tie and starts as the Mountain Hawks beat Colgate 4-3 on Friday in the fifth Game of the Patriot League tournament on the BU Softball Field.

Cimino had put Lehigh 2-0 ahead with an earlier double and home run before Colgate scored three runs in the fifth inning to take the lead. She drove in all four rounds for the Mountain Hawks, who are back in the championship round of the tournament for the fourth time in a row. Lehigh must beat Boston University host and top seed twice on Saturday to win his first title since 2017. The Terriers defeated the Mountain Hawks 9-1 in five innings in their first game on Friday and only need one win on Saturday to win their third straight tournament title.

Lehigh (18-15) took a 1-0 lead in the third inning of the playoff when Cimino doubled up on Josie Charles, who led the inning with a mistake, in the second half.

Cimino doubled Lehigh’s lead in fifth place when she hammered Bella Crow’s 3-2 pitch over the right field fence for her third home run of the season.

Colgate responded at the bottom of fifth place and loaded the bases with an out before Virginia Irby cleared them with a double on the left field line and gave the Raiders a 3-2 lead after five.

The Mountain Hawks moved up one point to the top of the seventh. Junior Addie Kittel pulled a pinch hit walk with an out. After a flyout, Junior Carley Barjaktarovich played in the middle to keep the game going and to give the go-ahead. Colgate returned to pitcher Bailey Misken’s start but Cimino greeted them with a 2-1 pitch down the left center. The pinch runner Ansley Dambach scored the tie run and Barjaktarovich came around from the start to hit the throw for the start run.

Junior Gabriella Nori worked on a one-off walk at the end of seventh place to ensure victory. A day after taking out the Raiders with two hits, she allowed three eight-hit runs with a walk and a strikeout to claim her ninth win of the season. She was supported by two doubles played by the Mountain Hawks in the third and fourth innings.

Lehigh had seven hits against the Raiders. Cimino was 3v4 while Barjaktarovich was 2v3 to take the lead.

In Lehigh’s first game on Friday, Boston University scored four runs in the first inning, three in the second and one in the third to take command of the winner’s bracket contest. Nori was shot down by three walks and three hits in the first inning when her series of consecutive innings without allowing a deserved run ended at 36.

Lauren Nett was 2-4 with three RBIs, while Marina Sylvestri had an important dash of two run singles in the first inning as Boston University improved to 35-2 over the course of the season.

Lehigh scored his only run in the fourth inning when freshman Amanda Greaney took the lead with a double-to-right center and honored Charles Bella Egizio as the home pinch runner. Net’s RBI single at the end of the fifth inning ended the game by eight-run rule.

Barjaktarovich had a pair of colorful singles and went for a walk in three games against Patriot League pitcher of the year Ali DuBois. The Mountain Hawks finished their first game of the day with a total of four hits.

The championship round on Saturday starts at noon on the BU Softball Field. Lehigh takes two wins to claim the title, while Boston University only takes one. All actions from the Patriot League tournament will be retransmitted to ESPN +.

Mountain Hawks Come Up Short Against Boston U. In Patriot League Championship