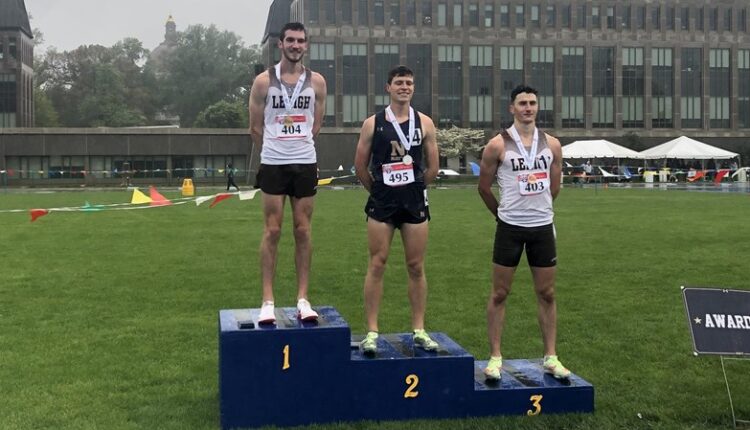 ANNAPOLIS, Md. – Kyle Burke has had an impressive year for Lehigh and showed no signs of slowing down on Saturday at the Patriot League Championships. The senior won the 800m with a time of 1:52.59 to secure his third Patriot League title of the year. In February at the indoor championship, Burke won the 800m and was a member of the first-place distance medley relay team.

The Lehigh men’s track and field team finished the two-day championship meet in fifth place. Navy, who hosted this year’s championship, won the championship with 333 points. The Mountain Hawks scored points in 14 of the 22 events, finishing with a team total of 61 points.

“I’m really proud of our seniors,” said head coach Matt Utesch. “We had the most miserable conditions in my 25 years of Patriot League competition but in spite of those issues, our student-athletes remained calm and focused.”

After winning the 800m at the indoor championships in February, Kyle is bringing home the gold once again! He won the 800m with a time of 1:52.59. Congratulations Kyle 🎉 pic.twitter.com/Bd0AwywM5y

“Kyle Burke does not disappoint and his racing style is certainly something to appreciate,” said Utesch. “He had the calm demeanor of a seasoned veteran. He rounded the third turn and began his move. With 200 to go he had opened up a significant gap on the field and had a very convincing win. Kudos to Kyle, Coach Etters, and all of the guys who have trained and pushed him over the past seasons.”

Lehigh’s distance runners continued to put up solid times on the track. Leading the way was Avery Lederer who finished fifth in the steeplechase. Lederer ran the race in 9:18.37, a new personal best for the senior. In the 800m, junior Kerem Ayhan ran alongside Burke. He finished third with a time of 1:56.66.

Despite the rain, the sprinters were able to earn points for Lehigh on Saturday. Senior Harrison Ernst finished sixth in the 400m with a time of 50.58. In the 400m hurdles, first-years Patrez Thomas (57.73) and Jack Murphy (1:00.08) finished seventh and eighth, respectively.

First-year Liam Lovering made his outdoor championship debut and showed no signs of nerves on Saturday. Lovering finished sixth in the discus with a mark of 44.66m and tenth in the shot put with a mark of 14.75m.

Gideon Coprivnicar made his outdoor championship debut this weekend. The first-year competed in his second decathlon where he finished eighth overall with a new personal record of 5,776. On Saturday, he earned personal records in the discus (35.21m), pole vault (4.73m) and 1500m (5:14.05).

Lehigh will send a group of student-athletes down to Williamsburg, Va. for the IC4A Championships next weekend. Competition will begin on Friday, May 13 and end on Sunday, May 15.