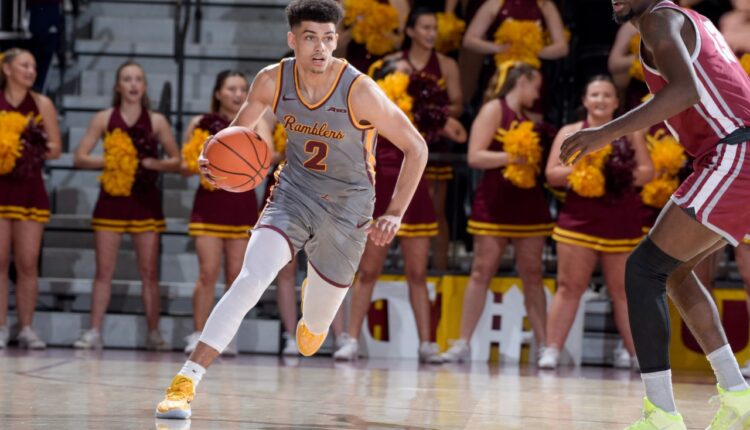 An Inside Look Into Loyola’s New Men’s Basketball Roster

The Loyola men’s basketball team (2-0) lost a total of nine players coming into the 2022-23 season, including three of last season’s starting five. In their first season in the Atlantic 10 (A-10), the Ramblers have large shoes to fill as they head into an arguably tougher conference after leaving the Missouri Valley Conference (MVC) in 2022.

Despite losing two of their top players, the Ramblers welcomed nine new ones this offseason. They started the season with a 2-0 record and, according to redshirt first-year Ben Schwieger, have “one of the most athletic teams Loyola has ever had.”

Loyola Head Coach Drew Valentine also spoke on his new roster’s athleticism and the depth they were able to build with the incoming athletes.

“I just think our overall team athleticism and speed,” Valentine said of the improvements of his team this season. “We’re longer, we’re more athletic, we’re faster, covering more ground out there on the court.”

Leading the team are returning redshirt senior Braden Norris and senior guard Marquise Kennedy — the only remaining members from last year’s starting five, both two-time MVC Champions (2020-21, 2021-22). Norris has a 51-13 record with the team and Kennedy, although returning from an injury, has helped the team to a 10-2 record when he scores more than eight points according to Loyola Athletics.

Returning as a starter in both games this season is senior forward Tom Welch. After coming off the bench last season, Welch quickly established himself as a reliable big for the Ramblers, shooting a perfect 12-12 from the floor, while averaging a team-high 14 points per game.

Loyola brought back Schwieger as well, who played his first official game with the Ramblers Nov. 7 after being redshirted for the 2021-22 season. In the Ramblers’ latest outing, Schwieger was second in scoring, posting 12 points, two assists and four rebounds.

Prior to the start of the season, Schwieger expressed his eagerness to return to the court. He said it must be fun to play on a team with so much talent and athleticism.

“I haven’t played in front of a crowd in two years because my senior year was COVID in high school,” Scwhieger said. “I’m super excited to get in Gentile and play in front of everybody and with the new team.”

Headlining the newcomers are two junior transfers who have already made an impact at Loyola — guard Sheldon Edwards and forward Philip Alston.

Edwards, a transfer from Valparaiso University, instantly became a fan favorite at Loyola. In the Ramblers’ first game of the regular season against Fairleigh Dickinson University Nov. 7, Edwards drained a buzzer-beater fadeaway jumper to force overtime for a Loyola win. Alston, a transfer from California University of Pennsylvania, led the team in scoring with 18 points to defeat its cross-city opponent University of Illinois Chicago (UIC) Nov. 11 in the team’s second regular season game.

Also joining the Ramblers as transfers are graduate center Bryce Golden from Butler University and graduate forward Jeameril Wilson from Lehigh University. Golden said the team’s transfers bring different experiences and insights to elevate its play, adding how Loyola’s environment of togetherness has helped them grow as a team.

“When I got here, I could tell this place is special,” Golden said. “In regards to the family atmosphere, the coaches and the players have great connection. The team is super close-knit.”

Golden was the only player to start all 33 games for Butler last season, averaging 8.8 points per game and 3.6 rebounds per game. His best performance with the Ramblers this season was a 12-point outing in their win against UIC.

Valentine said everyone on the team would get a chance to play and then mentioned Golden specifically. He said Golden would have a great opportunity with his size, speed and skill, but said his coaching staff wasn’t just focusing on upperclassmen this offseason.

“We wanted to add guys from multiple years,” Valentine said.”We didn’t want to just add a team full of graduate transfers because it’s hard to build the program like that.”

Loyola welcomed five first-year athletes this offseason — guards Jalen Quinn, Jayden Dawson, Trey Lewis and Caleb Reese, alongside forward Nolan Marold. Leading the first-years in minutes is Quinn, who scored a team-high 20 points in an exhibition game against Calumet College Oct. 30. Dawson is the only other first-year to earn playing time, averaging 13.2 minutes per game.

Transitioning from an experienced team that made multiple NCAA Tournament runs, Valentine said he had to make some adjustments to his offense with a much younger core.

“I think we’re being more simple offensively,” Valentine said. “We’re not running as many sets and walking the ball up, and kind of targeting people to get action to. It’s a little bit more free-flowing.”

After winning back-to-back MVC Championships, the Ramblers were ranked fourth in the A-10 preseason poll. However, Valentine said being a top-six team in the A-10 means you have a chance at the conference championship. He said his players can exceed expectations if they compete with passion.

“I think this is a postseason-level team,” Valentine said. “If we can do what I said from a competition standpoint and really play with the grit and toughness of the Loyola teams of the past.”

The Loyola men’s basketball team will travel to Conway, South Carolina to face The University of Tulsa Nov. 17. This marks the first of three matches the Ramblers will play in the Myrtle Beach Invitational — a tournament style event. Tip-off is scheduled for 8:30 pm and is set to be broadcast on ESPNU.

The Player-Coaches of Addiction Recovery Work Without Boundaries