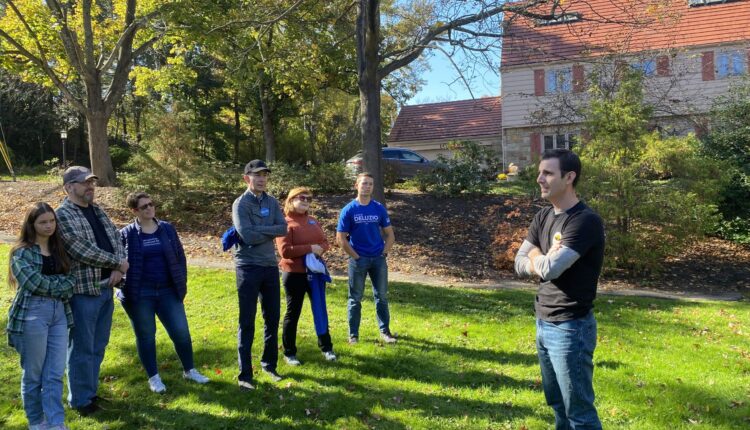 In a race that the non-partisan Cook Political Report called a “Democrat Toss Up,” University of Pittsburgh professor Chris Deluzio won Pennsylvania’s 17th Congressional District by an unexpected 6 percentage points on Election Day, outperforming President Joe Biden in the district in 2020.

While Republicans painted 2022 as a referendum on the economy, Democrats framed the election as a referendum on democracy. Deluzio’s pro-labor stances, which included his opposition to “right-to-work” laws and outsourcing jobs, allowed him to do both, turning out and flipping more than enough votes to keep the district in Democratic hands after U.S. Rep. Conor Lamb ran for Senate instead of reelection.

In W.Pa’s 17th District, Dem Deluzio reflects on the last day of the campaign

Whether it was talking to parents picking up their kids from school or greeting folks at fall festivals, Deluzio “talked about inflation,” his campaign manager, Matthew Koos, told the Capital-Star. “It was not something we ignored.”

The message was simple: relocate supply chains to the United States, if not western Pennsylvania, creating jobs and keeping prices from skyrocketing in case China shut its doors again, Koos explained.

“This is a region in our country that was the job creator. We made things,” he said. “People think we can get back to that.”

This message even resonated in red-collar Beaver County where union membership collapsed after the steel industry pulled out in the 1980s. Aged and depopulated, the rural county has tried its luck with Republican presidential candidates since 2012.

Though Deluzio only won 41 percent of the county’s vote, Aliquippa Mayor Dwan Walker hoped Deluzio would “spark a revival in the union spirit” because “he understands wholeheartedly what we’re facing and what we’re up against.”

“The Wagner Act was signed in Aliquippa, Pennsylvania. People died when that act was signed,” he said. Since 1936, the federal law has guaranteed the right to unionize, strike, and to collective bargaining.

Deluzio’s “special sauce was labor,” said Elaine Frantz, a history professor at a Midwestern university who noticed while canvassing her white-collar neighborhood how much the candidate’s wWestern Pennsylvania values resonated in Mount Lebanon, one of the many Pittsburgh suburbs in the district.

Deluzio “struck me as a person who was going to stand up for the little person,” she said, whether it be justice for incarcerated people, the protection of women, or when he successfully helped University of Pittsburgh faculty to unionize. “That’s where the party needs to go.”

Though nurses and teachers often fill their ranks instead of steelworkers, Frantz added, “unions are still very central to political organization in western [Pennsylvania], including Mount Lebanon.”

Unions are among the dozens of organizations that endorsed Deluzio and helped get out the vote, she explained.

“Voter turnout has been doubling every year” in Wilkinsburg thanks to registration drives and canvassing by groups like Wake Up the Vote Wilkinsburg, the borough’s mayor, Dontae Comans said.

Turnout reached 47 percent in the heavily Black suburb because Deluzio “was knocking doors personally” Comans said. “When you get to the doors, it gets to their hearts.” 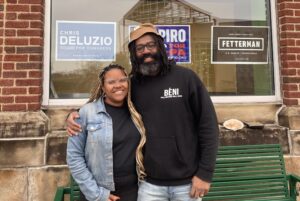 “Every time I turned around Chris Deluzio was in Aliquippa, he was in Wilkinsburg, he was in Beaver Falls,” Walker added, which helped get minorities to the polls across the district’s two counties.

“The most important thing is just to be included, like you can’t just treat us like a stepchild,” Comans said, which set Deluzio apart from the competition. Republican nominee “Jeremy Shaffer never reached out, like not even a text message.”

Deluzio’s fervor set him apart too.

“Women showed up” to the polls because “Pennsylvania politicians are often afraid to talk about the abortion issue,” Gabriel said. That was not the case with Deluzio she added.

After an early draft Dobbs decision, which ultimately toppled Roe v. Wade, was leaked in May, Gabriel recalled what she said was Deluzio’s unscripted reaction: “This is not a fight I’m going to shy away from. This is too important.”

His pro-abortion rights stance resonated strongly in Mount Lebanon where turnout rose to 70.5 percent from 68.7 the previous midterm.

“People really woke up” after Republicans ran for school board looking to ban critical race theory and criticized an elementary school teacher for reading a book to the class about accepting transgender people, according to Frantz.

“It really does feel like a fundamental threat,” she said. “Many of us, and particularly many of our kids, are LGBTQ+.”

Free and fair elections were on the ballot too.

Not only did the Donald Trump-endorsed gubernatorial candidate Doug Mastriano seek a total abortion ban without exceptions, he promoted the former president’s false claim that the 2020 election was stolen.

“Certainly the abortion debate drives people, but I think to a greater extent, what I kept hearing was a concern for the future of our democracy,” Gabriel said. Beyond sheer turnout, she spoke with many Republicans who planned to “vote straight Democrat” after the Jan. 6 insurrection.

Trump was a drag on even his party’s more moderate-seeming candidates, Republican voters told the Capital-Star.

“As a conservative, I wish he would go away, because I think he’s hurting the party right now,” he added.

Deluzio’s record as a Naval officer in the Iraq War made his democratic commitments clear to voters, Gabriel said.

“So many of us feel very much like he will fight for us in Congress, like he fought for us when he was in war,” Gabriel said.

Republicans tried to put crime on the ballot in 2022. Voters didn’t go for it | Opinion

An Inside Look Into Loyola’s New Men’s Basketball Roster