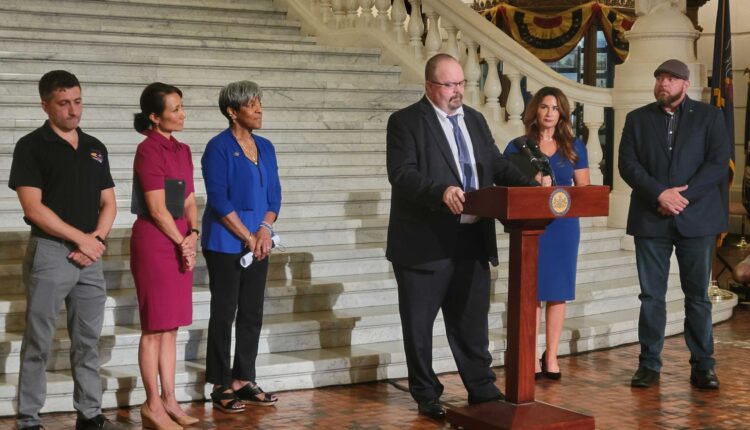 ‘We need to work together’: Lawmakers, labor leaders call for unity ahead of Labor Day

State officials, lawmakers, and labor leaders gathered in the state Capitol on Wednesday to recognize Labor Day and call on the General Assembly to work together to pass a minimum wage increase, and move bills that would strengthen worker protections.

Ahead of Labor Day on Mon., Sept. 5, and before the Legislature is slated to return to Harrisburg in the weeks following, labor leaders and state officials also called on lawmakers to remember the meaning behind the long holiday weekend.

“Yesterday, we lost a man from a construction site in Chambersburg, Pennsylvania, 30 years old. It’s terrible,” Michael Ford, Secretary-Treasurer of the Pennsylvania Building & Construction Trades Council said, as his colleague, council President Robert Bair, fought back tears. “We need to work – legislators – need to work together to advance the cause of working people across this commonwealth. Until we get on the same page and work together, we’re all gonna fall behind.”

“So when we go into this weekend, a lot of people think it’s a three-day weekend, right?” Bair asked. “It’s not. What happened yesterday is a perfect example of why we’re here today.”

Labor leaders expressed frustration by the Legislature’s inability to move bills that would improve the lives of workers across the commonwealth, such as public sector OSHA protections and an increase to Pennsylvania’s 7.25 an hour minimum wage to $15 an hour.

“We need to make these changes to protect workers, protect their families, and to protect and improve our society.” Steve Catanese, president of SEIU Local 668, said. “What we’re limited by in Pennsylvania is by the lack of vision and compassion by most of our elected representatives that work in this building, and their inability to see beyond the profit margins and people that make donations to them.”

“It is our responsibility to make decisions that are beneficial to the Pennsylvanian workers who are shouldering our economy,” state Rep. Patty Kim, D-Dauphin, said. “This starts with ensuring family-sustaining wages, paid time off, health insurance, and sick leave are all provided. I stand with Gov. [Tom] Wolf in his efforts to bolster workforce development and protect worker’s rights because I know that a healthy workforce makes for a healthy economy and a promising future.”

State Rep. Carol Hill-Evans, D-York, echoed Kim’s call for a higher minimum wage and recognized the efforts of labor unions advocating on behalf of the workers they represent.

“As we approach Labor Day let us all take time to recognize what labor unions and workers have done for Pennsylvania. Unions are important because they protect workers and help families,” Hill-Evans said. “The 40-hour work week, minimum wage, health insurance, and paid leave all have come from unions, and all of us have benefited from them. The labor movement has given workers the means to feed, house, and clothe their families, and take pride in their work. It also provided workers with basic rights to better ensure their health and safety on the job.”

Department of Labor & Industry Secretary Jennifer Berrier celebrated Pennsylvania’s 4.3 percent unemployment rate and called on the General Assembly to address a list of 15 recommendations submitted by the Joint Task Force on the Misclassification of Employees, which was created by the General Assembly in 2020 to identify ways to reduce the number of workers who are misclassified as independent contractors and therefore lose access to unemployment and workers’ compensation benefits, as well as workplace and wage protections.

‘This is a people issue’: Pa. lawmakers, advocates push for Clean Slate expansion