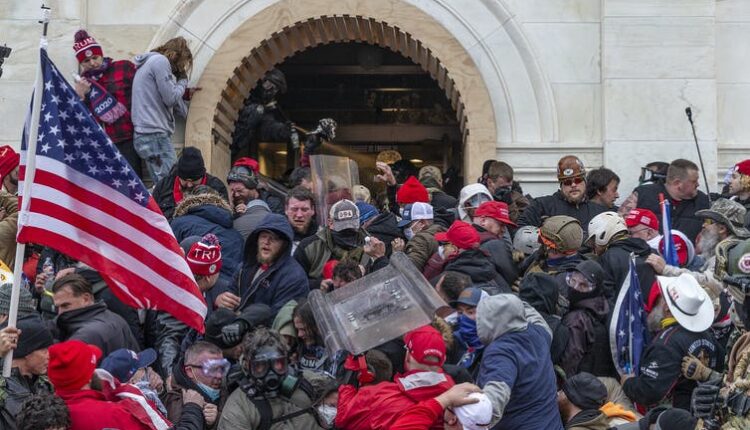 The U.S. House panel investigating Donald Trump’s attempts to overturn the 2020 presidential election results described Tuesday how the president explicitly called on his supporters to come to Washington on Jan. 6, 2021 for a “wild” protest — resulting in an insurrection.

Trump exerted extraordinary influence over the mob, who marched to the Capitol on his orders and undertook the violent attack, testimony showed. Many dispersed only when Trump asked them to do so, hours after mayhem broke out.

Members of the violent extremist groups Proud Boys and Oath Keepers and other Trump supporters interpreted a Dec. 19 tweet from Trump to attend a “wild” Jan. 6 rally in Washington as a call to arms to fight election certification, according to testimony at the  wide-ranging hearing, the seventh by the panel.

The three-hour session touched on the former president’s social media influence, a militia group’s desire for Trump to invoke the Insurrection Act and a shouting match between White House staff and outside Trump advisers over whether to try to cancel the results of the election.

“Big protest in D.C. on January 6th. Be there, will be wild!” Trump wrote.

“When Donald Trump sent out his tweet, he became the first president to call for a crowd to descend on the capital city to block the constitutional transfer of power,” Raskin said.

Chairman Bennie G. Thompson, a Mississippi Democrat, said both violent extremists and “average Trump supporters swept up in the fervor of the day” participated in the attack, and the panel heard testimony from one of each type.

Stephen Ayres, a northeast Ohio man who participated in the assault on the Capitol, testified that Trump’s tweet inspired him to travel to Washington.

Ayres told the panel he’d been interested in his family affairs and ordinary hobbies but was “pretty hardcore into the social media,” he said. He believed Trump and was angered by the president’s claims that the election was stolen, he said.

On Jan. 6, Ayres said he “was worked up” by Trump’s speech on the White House Ellipse. He joined an angry group that marched to the Capitol after Trump directed them there.

“Basically, the president got everybody riled up, told everybody, ‘Head on down,’” he said. “So we basically were just following what he said.”

Ayres and the crowd expected Trump to join them, he said.

Ayres only left the Capitol after Trump tweeted a video instructing his supporters to do so.

“We literally left right when that come out,” he told the panel. “If he would have done that earlier in the day, we wouldn’t be in this bad of a situation.”

Tweeting to the extremists

None answered Trump’s call faster than dangerous extremist groups, who interpreted it as a call to arms and immediately began organizing, Raskin said.

“Seizing upon his invitation to fight, they assembled their followers for an insurrectionary showdown against Congress and the vice president,” he said.

The mob Trump summoned “came prepared to do battle against police and politicians alike,” Thompson said.

A former Oath Keeper, Jason Van Tatenhove, testified that the group’s leader, Stewart Rhodes, routinely sought ways to legitimize the organization and said Trump’s messaging would have encouraged him.

Van Tatenhove left the organization before the lead up to Jan. 6. He called the Oath Keepers “a very dangerous organization” controlled personally by Rhodes.

Rhodes sees himself as “a paramilitary leader” and wanted Trump to invoke the Insurrection Act — which lets a president deploy the military inside U.S. borders for the purposes of law enforcement — to allow for paramilitary action on Jan. 6, Van Tatenhove said.

Messaging from Trump in advance of the attack “gave (Rhodes) the nod” to pursue a violent agenda that could have sparked a second civil war, Van Tatenhove said.

Rhodes and other Oath Keepers have been indicted for seditious conspiracy related to the Jan. 6 attack.

Van Tatenhove said he joined the Oath Keepers after meeting them at the stand-off at Cliven Bundy’s Nevada ranch in 2014. At the time he left the Oath Keepers, he lived in a small town in Montana. He now resides in Estes Park, Colorado.

Stone communicated regularly with both groups between the November election and Jan. 6, Raskin said.

Rhodes was in Washington for a Trump event on Dec. 12 and called for Trump to invoke martial law, Raskin said.

“If he does not do it now, we’re going to have to do it ourselves later in a much more desperate, much more bloody war,” Rhodes said in a video shown Tuesday.

Katrina Pierson, a former Trump campaign staffer who helped plan the Jan. 6 rally, reached out to White House Chief of Staff Mark Meadows on Jan. 2, concerned that speakers planning to speak at the rally were dangerous.

“Things have gotten crazy and I desperately need some direction,” Pierson said in a text message the committee showed Tuesday.

In a phone call eight minutes later, Pierson told Meadows, a former North Carolina congressman, that some speakers “were very suspect,” she told the committee in taped testimony.

The panel also showed evidence Trump planned to send supporters to the Capitol, though he didn’t publicly say that until his Jan. 6 speech.

Allies in right-wing circles anticipated that Trump would “unexpectedly” initiate a march toward Congress, according to a Jan. 4 text message the committee obtained from rally organizer Kylie Kremer to MyPillow CEO and pro-Trump conspiracy theorist Mike Lindell.

In a Jan. 5 meeting, Trump asked White House staff about the best route from the White House to the Capitol, former White House photographer Shealah Craighead said in taped testimony.

Several right-wing media personalities, including Steve Bannon, a former Trump campaign manager who remained in contact with the president, promoted that Jan. 6 would be more than a presidential speech at the White House.

“All hell is going to break loose tomorrow,” he said. “It’s all converging, and now we’re on, as they say, the point of attack.”

In a previous hearing, the committee heard that Trump had been informed before sending them to the Capitol that his supporters were armed.

In another text exchange with Pierson, former Trump campaign manager Brad Parscale blamed Trump’s rhetoric for the violence and the death of one supporter, Ashli Babbitt.

“I feel guilty for helping him win,” Parscale texted Pierson on the evening of Jan. 6.

Pierson responded that Trump’s rhetoric wasn’t responsible for the violence.

“Katrina,” Parscale wrote back. “Yes it was.”

Trump’s Dec. 19 tweet followed an all-night White House meeting that devolved into a verbal brawl between Trump outside advisers who sought to overturn the election and White House lawyers who thought those efforts were “a terrible idea,” in the words of former White House Counsel Pat Cipollone, who gave a deposition to the committee only last week.

The meeting started with Flynn and attorneys Sidney Powell and Rudy Giuliani gaining direct access to Trump without any White House staff present for 10 to 15 minutes, according to Powell. All three favored trying to overturn the election.

Once Cipollone found out what was happening, he raced to the Oval Office.

In taped testimony to the committee, mutual animosity between the two camps seemed to have lingered.

“I bet Pat Cipollone set a new land-speed record,” Powell told the panel in a deposition, referring to the White House counsel breaking up the Dec. 18 meeting.

“I was not happy to see the people who were in the Oval Office,” Cipollone said. “I did not think any of these people were providing the president with good advice. I didn’t understand how they had gotten in.”

“It got to the point where the screaming was completely out there,” Herschmann said. “What they were proposing, I thought was nuts.”

“A general disregard for actually backing up what you say with facts,” Cipollone said of the outside advisers.

“I’m going to categorically describe it as, ‘You guys are not tough enough,’” Giuliani said in taped testimony. “Or maybe I put it another way: ‘You guys are a bunch of p—ies.’ Excuse the expression.”

The committee also documented a Dec. 21 meeting Trump had with Republican House members to strategize about how to reverse the election results.

Georgia Rep. Marjorie Taylor Greene, who’d been elected but was not yet a member of Congress, was also present, according to the committee.

The Dec. 21 meeting centered, in part, on Vice President Mike Pence’s role in verifying Electoral College votes and on the pursuit of Trump outside lawyer John Eastman’s strategy to replace legitimate slates of electors in several states with fake electors who would cast ballots for Trump.

Asked about the committee’s assertion, Greene spokesman Nick Dwyer said the description was “all wrong” and that Greene had been focused on objecting to Electoral College votes from certain states Trump lost.

“We had a great planning session for our Jan. 6 objection,” Greene said in the video. “We aren’t going to let this election be stolen by Joe Biden and the Democrats. Donald Trump won in a landslide.”

Gaetz tweeted Tuesday that the meeting was collegial.

“Pence actually joined this meeting,” he wrote. “We ate Swedish meatballs in the Cabinet Room. Pence thanked us all for our service there.”

Representatives for the other named House members did not return requests for comment Tuesday afternoon.

At the end of the hearing, Vice Chair Liz Cheney, a Wyoming Republican, said that Trump had recently personally called a witness whose testimony had not yet been publicized.

The witness did not take the call and instead called their lawyer, who told the committee. The committee referred it to the Justice Department as possible witness intimidation.

“We will take any effort to influence witness testimony very seriously,” she said.

The committee’s next hearing, next week, will provide a “minute-by-minute” account of Jan. 6 and will include more from Cipollone’s deposition, Cheney said.

Rick Garboski runs out of golf balls, creatively plays on at Hoag Classic