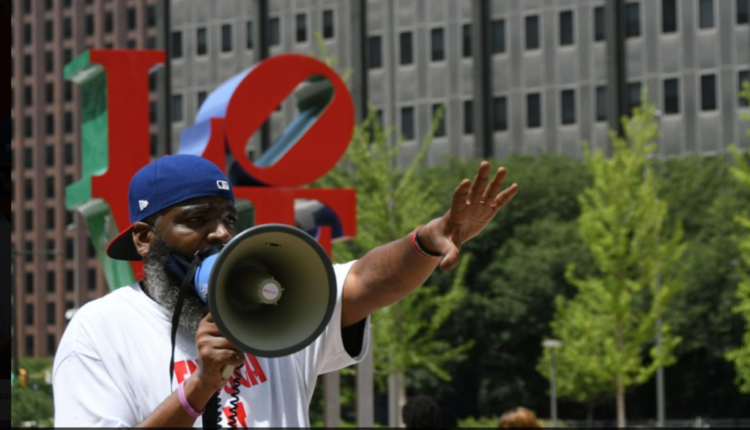 ‘This can’t be normal, this can’t be accepted’: Philly gun violence leaves families in pain, fear

He was afraid he might get another call with more bad news — that another of his students had been shot or killed. Four had already died of gunshot wounds this school year, prior to the June 8 graduation of his class of 2021. Another 19 had been either wounded or fired upon during the school year.

Now it was August, and Dunn had returned from vacation a few days earlier. Like his students, he was making excited preparations to begin the next school year in late August. Then the phone rang.

So much hung in the balance these days, just answering a call seemed dangerous.

He was stunned. It was another tragedy. One of his students, along with a student from Boys’ Latin High School, had just met their deaths on the streets of Philadelphia. Both were killed, sitting in a car with friends, waiting to go to shoot baskets at a nearby basketball court.

An email sent out to the faculty later that day listed Tommie as a member of the “Mastery Harrity, Hardy High and Gratz High School” communities, the campus where he had attended school, where his cheerful face had been seen day after day.

A photo circulated showing Tommie standing with a dean, Tommie’s ebony face and cherubic smile gleaming like a 100-watt bulb. Easy to remember. He stood out. A treasure for the community, Dunn must have thought. A scholar and basketball player.

“K.J.” as young Kaylin, Tommie’s friend, was called, was another talented basketball player. Like Tommie, he was in the car with two other friends about to leave for practice. A photo of “K.J.” showed him exhibiting Ben Simmons-like virtuosity as he zipped past a player on the court.

“K.J. just got his driver’s license and his mom rewarded him,” his aunt told reporters.

“It’s horrible for the family, horrible for his mother. She lost her only child, her son, her best friend,” said the aunt, who preferred not to identify herself.

“I just want everyone to know my son was a good kid, everyone loved him,” Umbrenda Barksdale said.

As he ended the call, Dunn knew he would now have to make another one much more painful — to Tommie’s family to offer condolences. Though he did not say it, the thought must have occurred to him that he was supposed to be an educator — not an undertaker.

“This can’t be normal, this can’t be accepted,” a Boys’ Latin football coach was reported to have told his players at the school.

But, unfortunately, it was getting to be normal for Dunn, 30, a new principal, just breaking in with only two years under his belt at his new school here in Philadelphia, a long way from the bayous of his native Louisiana.

Gratz was one of 25 schools in Philadelphia that are in areas with a high concentration of gun violence deaths of victims under 18 years of age.

The neighborhoods where these schools are located combined to account for 50% of the total deaths of victims under 18 during the school year.

According to Dunn: “What all 25 schools have in common is ZIP codes and almost exclusively Black students.”

For Dunn, himself a 6-foot-6 former college athlete, the deaths of such fresh-faced, smiling youngsters were becoming an all-too-common occurrence.

In his first year, Dunn lost a standout basketball player named Ross Carter, a 19-year-old who was shot and killed as he sat on steps in his neighborhood.

He wondered how such a thing could be so common. So far over 130 children under 18 had been shot since January.

Possibly, not since the Vietnam War — when Philadelphia’s Edison High suffered more war-related deaths than any school in the nation — had violence emptied seats in the School District of Philadelphia the way the recent gun violence upsurge had this last school year. Edison too had been predominantly Black.

But Gratz was only a piece of the Philadelphia puzzle. Throughout the city, gun violence continued to surge in 2021, though it seemed to slow a bit in August.

It was a strange year in which everyone was blaming everyone else for the upsurge. With the violence slowing from 34% over the previous year to 26% of what it had been last year, Mayor Jim Kenney said — with no one disagreeing — that it was not yet time to declare victory.

For instance, just as the internet has been blamed for costing lives by hosting anti-vaccine postings from “Q Anon” and other right wing, according to President Joe Biden, so have some local officials blamed the internet’s social media for spiking the loss of life in places like Philadelphia by broadcasting violent rap music, personal disputes, gang beefs and misinformation.

In one high-profile case, authorities said they believe three neighborhood teens fired two dozen shots at two best friends misidentified on Instagram in a botched attempt to retaliate against members of a rival group.

If the pace of summer homicides continued, officials said, the city would soon see more homicides for 2021 than any year in history. Already it was well ahead of last year in per capita killings.

Gunfire had already taken over 309 lives, a number the city didn’t hit last year until Aug. 14. The city was said to be 34% higher than the previous year in per capita killings.

The violence seemed to continue apace in the wake of the Fourth of July. While it trended downward a little in August, even if it all stopped tomorrow, the city would be left with a plague of physical trauma of youth in wheelchairs, in hospitals or undergoing therapy for mental wounds like PTSD.

The shooting last month in Washington, D.C., outside a stadium during the Washington Nationals-San Diego Padres game had left experts edgy about whether the violence would slow or not.

For Dunn, back at Gratz Mastery Charter, the Washington shooting hit a nerve. It seemed like déjà vu. The incident brought back memories of his first year at Gratz when two gangs of youth traded gunfire outside the Marcus Foster stadium during a football game attended by 500 members of Gratz families and community. Dunn said the shooting didn’t have any connection to Gratz, but it had been unsettling.

As with the incident in Washington, the gunfire in Philadelphia happened outside the game, with few, if any injuries.

No time for blame

Meanwhile, at Philadelphia City Hall, neither the mayor nor the police commissioner was accepting “blame” for the overall uptick in gun killings. Both Kenney and Police Commissioner Danielle Outlaw had said previously that the upsurge in gun violence was a national trend — not merely a Philadelphia phenomenon.

They conceded, however, that they were responsible for “fixing” the problem.

Pinning the blame on any one thing or any one person would have been difficult. The gunfire broke out and reached alarming proportions in the wake of a pandemic, civil unrest, lowered police morale, the emptying out of jails due to the pandemic, the halting of in-person court proceedings (as well as schools), quarantines, lockdowns, Donald Trump-inspired political bickering, and an unprecedented insurgency at the U.S. Capitol building.

The panicky purchasing of guns that ensued, along with the quarantines and shutdowns, took top billing in the minds of many officials in Philadelphia and elsewhere as the source of the gun violent carnage, but others argued that there were plenty of illegal guns already on the street and much frustration and anger in inner cities over racial injustice.

The real blame was hanging out there somewhere but was obfuscated by the plague within a plague going on at the time — the epidemic of partisan bickering.

The only real certainty was that an additional pandemic of gun-related homicides had hit the nation, and Philadelphia was in the thick of it.

One bespectacled woman at one of the shootings in the city was unabashedly certain she knew the reason for the killings. She refused to identify herself other than to say that she was a local resident and a former “bio-ethics professor” at a local college.

“There’s something called Occam’s Razor,” she volunteered, “that states that the simplest hypothesis or explanation is the most reliable. For instance, if you hear hoof beats, you don’t posit a zebra, but a horse. The same is true with gun violence. The more gun violence you hear about, the more you know guns are the culprits.”

She said Australia and Canada have used gun control laws to quell the violence. But she said there was no Second Amendment in the constitutions of those countries to protect guns as there is here.

Meanwhile, a “perfect storm” of deadly factors helped revive an old nickname for Philadelphia popularized by its detractors — “Killadelphia.”

As one activist, Isaac “Ikey Raw” Gardner, put it: “This is crazy times.”

And Philadelphia was not alone. Other large cities were also experiencing more shootings at a time when other crimes were decreasing.

Black males remained the highest percentage of victims. That added to the argument from those who blamed racial injustice for the outbreak of gun violence.

They argued that the upsurge in recent gun violence killings was merely a continuation of ongoing gun killings in the Black community.

According to recent police data, the three main causes of gun-related violence were arguments, drugs and domestic disputes. Social media was said to be stoking many of the arguments and disputes.

Regardless of the causes, it seemed as if a civil war was raging in urban areas, particularly in places like Philadelphia.

Meanwhile, schools like Gratz and Boys’ Latin in Philadelphia — like so many other urban campuses — seemed to have continued as normal amid the daily loss of life violent street skirmishes involving guns flooding into inner cities into the hands of juveniles and young angry Black males boxed into segregated and impoverished communities. The warfare seemed to jeopardize the futures of not only the students but the nation.

So much talent seemed to be draining away amidst the bloodshed in these urban areas.

As the summer break wound down, there seemed to have been a little break from killings and nightmares of friends and acquaintances dying at schools like Gratz in Philadelphia.

But this year Dunn was determined to lessen the casualties at his school. He had morphed from educator into protector-educator.

“I have hired a new position at the school,” said Dunn. “It is a director of Healthy Communities. A portion of his role will be anti-gun violence in this community and on this campus.”

He has also brought in CeaseFire Philadelphia, a national anti-violence program.

“Any student at the high school that is high risk or vulnerable — once identified as needing cognitive behavior therapy and eligibility for mentorship — would receive help.”

Dunn said mentorship and mentored jobs would be made available, as well as enrichment activities.

If situations were possibly gun-related, he said, the students would be connected with the anti-violence program Ceasefire Cure Violence to get support in resolving the situation.

Meanwhile, city officials have drawn some hope from Biden’s American Rescue Plan. Biden has encouraged states to draw on the assistance included in the plan to address violent crime.

Dunn said he hopes the plan works as he tries to hustle his students into safety while looking over his shoulder in fear of the next phone call.

Dwight Ott is a correspondent for the Philadelphia Tribune, where this story first appeared.

Storytime to return to the library | News, Sports, Jobs