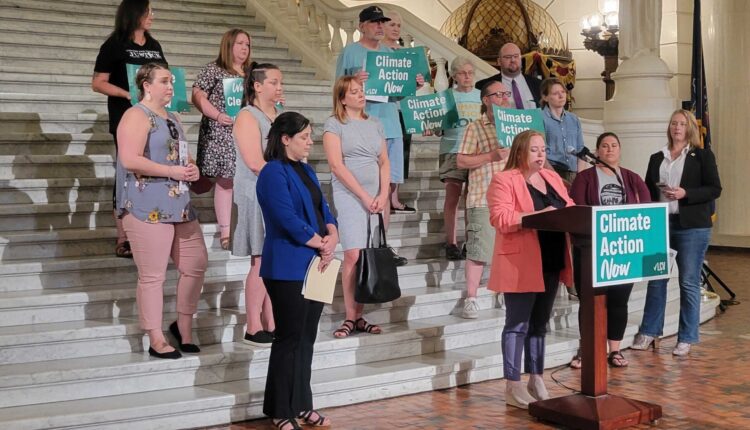 The group of more than 30 environmental advocacy organizations presented a plan, called “A Shared Vision for Pennsylvania’s Environment and Communities,” which they say will create jobs and protect families.

“Our Shared Vision advances the fight for justice in all forms — housing, economic, environmental, racial and social,” Diana Robinson civic engagement director at Make the Road Pennsylvania said. “By engaging and educating policymakers about the role they can play to create a better Pennsylvania for their constituents, we hope to create a healthier, more equitable and prosperous Commonwealth.”

“Our Shared Vision broadens the tent of environmental advocacy to show how protecting our open space, improving our air and water quality and building a green energy economy will benefit every Pennsylvanian, from the biggest city to the most rural township,” Molly Parzen, executive director of Conservation Voters of Pennsylvania, said.

The plan also states that proceeds from the Regional Greenhouse Gas Initiative (RGGI), a multi-state initiative to address climate change that the commonwealth joined in April, should be invested “in ways that lower energy costs for low-income families and create jobs in underserved communities.”

State Sen. Amanda Cappelletti, D-Delaware, joined advocates at the Capitol on Tuesday, saying that legislators have “failed” to act on climate change.

“Today, in 2022, we absolutely have the resources and the opportunity to take bold legislative action that will not only preserve our environment, but that will foster innovation, protect our public health and position Pennsylvania as a leader in the clean energy space,” Cappelletti said. “We must only be brave enough to enact it.”

“We hope that candidates for governor and for the state Legislature will use this document as a guide in developing their platforms, and after they’re elected, that they will prioritize making these policy solutions a reality,” Jennifer Quinn, legislative and political director for the Pennsylvania Sierra Club said.

Indiana likely to continue funding Pa.-based Real Alternatives despite questions over spending, according to our sister publication the Indiana Capital Chronicle.

On our Commentary page this morning:

John A. Tures reflects on Bill Russell and Nichelle Nichols and their greatest roles you may not know.

Fletcher McClellan writes: This week is a good time to be a Pennsylvania Democrat.

The Philadelphia Inquirer reports: On this, they agree: Josh Shapiro and Doug Mastriano want lower corporate taxes in Pa.

From The Centre Daily Times: PA has 161 reported cases of monkeypox. Here’s what to know about the disease, symptoms.

Gov. Tom Wolf does not have any public appearances scheduled for Wednesday, Aug. 3, 2022.

‘An Arm and a Leg’: Her Bill for a Prenatal Test Felt Like a ‘Bait-and-Switch’ Scheme