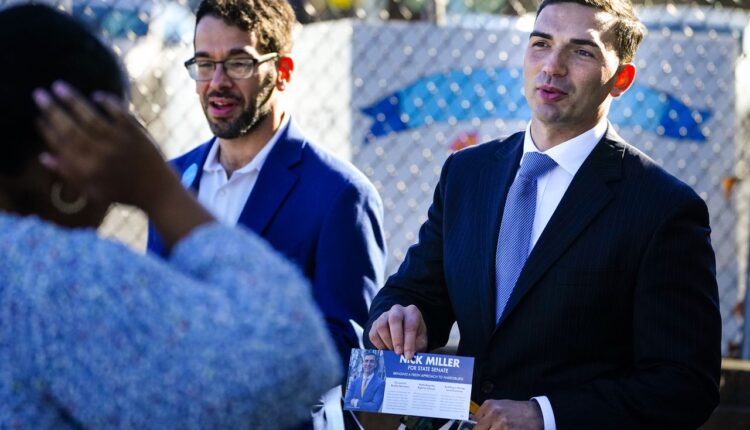 In what is being called historically exceptional, two Lehigh Valley candidates for state Senate each had victories that were boosted by more than $1 million in cash and in-kind donations.

When cash and in-kind donations from his opponent Republican Dean Browning are factored in, the two 14th candidates raised a combined $1,601,815.

Chris Borick, director of the Muhlenberg College Institute of Public Opinion, described the amounts raised in the senate races as consequential.

“Those finance figures for the PA Senate races are exceptional by historic standards and certainly signal we are in a new era in terms of the costs of state legislative races,” Borick said in an email.

Borick said the influx of money and services signals that “both parties have increasingly recognized the key role of state government, especially in swing states such as Pennsylvania.”

He said, “Thus, it’s likely that the amount of money coming into these races will continue to rise in upcoming cycles.”

Both the 14th and 16th seats had no incumbent going into the Nov. 8 election, the 14th from redistricting and 16th from a primary defeat—making them must-wins for both parties.

Adding to the need for large campaign coffers was that Coleman and Miller faced tough primaries.

Coleman, who had been elected to office for the first time in November 2021 as a Parkland School Board member, defeated longtime incumbent Republican Pat Browne by 24 votes.

Miller, an Allentown School Board member, defeated Democrat Tara Zrinski, a Northampton County commissioner, by 42 votes in a race whose outcome was delayed by a lawsuit filed by voters over uncounted ballots.

Meanwhile, in the 137th House District, incumbent Republican Joe Emrick, who was first elected in 2010, and Democrat Anna B. Thomas, a political newcomer, together generated at least $1 million in cash and in-kind donations.

Emrick, who saw his district become evenly split due to redistricting, beat Thomas by 766 votes.

Across the Lehigh Valley, candidates were lifted by donations from political action committees and elected state lawmakers.

In another show of how fiercely political powers were looking for wins, Democratic, Republican and special-interest groups contributed more than $2.2 million of in-kind donations for media buys, polling, mailings and staffing for candidates running for state House and Senate in the Lehigh Valley.

Here’s a look at what Lehigh Valley candidates raised and spent.

All filings are through Nov. 28 except where noted. This post will be updated when they are available.

A final campaign report is due Jan 31.

Highlights: Miller raised a combined $1,064,975 in cash and in-kind contributions. He raised the most cash of any candidate running for the state Senate or House in the Lehigh Valley. The bulk of his cash came from political action committees, including unions and incumbent democratic lawmakers. The political campaign committee of state Sen. Vincent Hughes, the minority chair of the Senate Appropriations Committee, gave $162,750. Most of Miller’s in-kind contributions came from Democratic Party-related PACs and $4,200 coming from Planned Parenthood’s PAC.

Highlights: Monetary donations include $55,000 from the For-Ward PAC and $45,000 from the Senate Republican Campaign Committee. Browning had the most in personal loans of the Lehigh Valley candidates running for the state House or Senate.

Highlights: Coleman raised a combined $1,229,214. The bulk came from in-kind contributions to help him defeat longtime incumbent Sen. Pat Browne in the spring and Democrat Mark Pinsley in the fall. Much of the in-kind contributions – $520,087 – came from Citizens Alliance, which is linked to Jeffrey Yass’ Students First PAC. Yass is co-founder of the Susquehanna International Group and is Pennsylvania’s richest resident.

Coleman’s debt breaks down to $31,500 in loans from William Bachenberg and $75,000 from his wife, Laura. The Bachenbergs are owners of Lehigh Valley Sporting Clays in North Whitehall Township. William Bachenberg drew headlines earlier this year after the US House committee investigating the Jan. 6 insurrection subpoenaed him to testify about his involvement in the effort to overturn the 2020 election. The committee said it learned Bachenberg chaired a meeting of Republicans who prepared a signed list of alternate electors to be appointed to the Electoral College in the event that Trump won his court challenges.

Highlights: Pinsley spent more than he brought in, leaving him with a negative fund balance and personal loans.

Highlights: Most of her contributions came from the Republican Party of Pennsylvania.

Highlights: Most of Schlossberg’s contributions were of $1,000 or less, including political action committees. Schlossberg had a negative balance on Nov. 28.

Highlights: The bulk of Schweyer’s contributions came in at under $1,000, including PACs.

Democrat Anna B. Thomas (Filing through Cycle 5, which ended Oct. 24)

Highlights: Thomas had $599,607 in cash and in-kind donations through Cycle 5, which helped her come within 766 votes of defeating Emrick. The Democratic Party kicked in the bulk of her in-kind contributions. She also received strong financial support from unions and democratic PACs.

Highlight: The bulk of her in-kind contributions came from PA GOP.

List of Drive-In Concerts in Wake of Coronavirus – Billboard