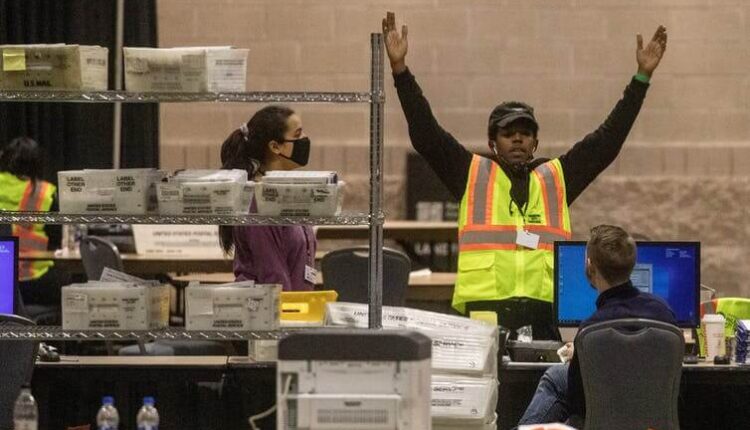 One in four local election officials and nearly two-thirds of those in large cities received violent threats after the 2020 election, and nearly one in five plan to leave their jobs before the next presidential election, according to a survey released Wednesday.

The survey was the fourth since 2018 from the Elections and Voting Information Center at Reed College in Portland and the Democracy Fund, a nonpartisan foundation in Washington, D.C. It found that nearly 40 percent of election officials who are eligible to retire plan to do so before 2024, and a significant group cited the political environment and concerns about their health or personal safety as reasons to retire.

Tammy Patrick, a senior adviser at the Democracy Fund and a former election compliance officer in Maricopa County, Arizona, said in an online press conference that the survey confirmed anecdotal reports from election officials.

“We know that our election officials are understaffed,” Patrick said. “They’re under-resourced, underappreciated and now they’re under attack.”

Harassment was highest in the West, where nearly 40 percent of election officials said they were threatened. It was also more common in large jurisdictions, and nearly two-thirds of respondents said the attacks were politically motivated.

“The narrative of conspiracy is pervasive, and election officials are having to deal with it in many, many places,” Patrick said.

The survey, conducted between June 21 and Sept. 22, included written responses submitted online or by mail by 912 local election officials. More than 3,000 were asked to participate.

More than half of the country’s election officials are elected, many as county clerks or recorders who split their time between running elections and recording official documents such as real estate deeds or marriage licenses. In small jurisdictions with fewer than 5,000 voters, more than two-thirds are elected.

Because of the high number of voters in major cities, 2 percent of local election offices serve half of the country’s voters. Urban offices, in places like Maricopa County, have dozens of full-time election staff, while nearly one-third of all offices and more than half of offices with 5,000 or fewer voters don’t have a single full-time employee dedicated to elections. Three-quarters of local election officials serve just 8 percent of voters, the survey found.

“The average election official is going to be an individual who serves in a single-person office in a small township in Michigan or Wisconsin,” said Paul Gronke, a Reed College political science professor and director of the college’s elections center. The average voter, meanwhile, lives in a county with more than 75,000 voters.

That share skyrocketed to 55 percent in 2020 and only fell to 46 percent in 2022 for small jurisdiction. The jump in 2020 could be attributed to states that historically relied heavily on in-person voting shifting to mailing ballots because of the Covid pandemic, but Gronke said the continued higher demands in 2022 are likely due to persistent records requests from election skeptics.

Over the past two years, state and local election officials across the country have received time-consuming records requests for ballot images, election procedure documents and various spreadsheets or databases. The vast majority of the roughly 100 most recent records requests to the Oregon secretary of state, for example,  are tied to election conspiracies about ballot-tabulating machines.

Gronke said those continued records requests are contributing to officials choosing to leave their jobs. Nearly one in five of the election officials surveyed plans to leave before 2024.

Pa. elections likely to generate a new round of lawsuits over mail-in ballots, retired judges say

“For a lot of folks, it’s just one too many challenges,” Gronke said.

The survey also found election officials are worried about new laws that impact their work. More than half said their state Legislature passed laws since 2020 affecting election administration, but half of the officials surveyed said lawmakers didn’t consult them before passing such laws.

That included laws that made it easier to remove people from early voting lists in Arizona and Florida, harder for voters to sign up to vote by mail in Georgia, Iowa, Kansas and Texas and reduced ballot drop boxes in Florida, Georgia, Iowa and Indiana, according to a roundup from the Brennan Center.

Other states – including Oregon, which in 2021 passed a law allowing the counting of ballots postmarked by Election Day – passed laws expanding voter access. Those laws also have had an impact on election officials, who have had to change procedures and in some instances open additional polling places or drop boxes.

In several states, including Arizona, Michigan, Minnesota and Nevada, people who don’t believe that the 2020 presidential election was legitimate are in close races for secretary of state,  the statewide position responsible for running elections.

Patrick, of the Democracy Fund, said she was most concerned about Arizona, where the secretary of state is responsible for writing an elections procedures manual that has the force of law and directs how counties run elections.

Mark Finchem, a Republican state representative who attended the Jan. 6, 2021 attack on the U.S. Capitol, is running for secretary of state. Arizona’s governor and attorney general must approve the elections procedures manual, and the GOP nominee for governor Kari Lake and Abe Hamadeh, the Republican candidate for attorney general, are also election deniers.

Gronke said he was also concerned about Georgia and Pennsylvania, both of which have close races and “less than optimal” laws for processing mailed ballots. Pennsylvania, in particular, doesn’t allow election officials to begin validating mail ballots until Election Day – meaning results are likely to trickle slowly as election workers confirm that voters signed their ballot envelopes.

“I worry that people will be declaring victory on election night when not enough votes have been counted,” Gronke said.

“As long as we don’t have large numbers of them being elected in any state, we can still move toward 2024,” Patrick said. “We may be limping slightly, but we should still be able to emerge out on the other side and have free and fair elections.”

Julia Shumway is a reporter for the Oregon Capital Chronicle, a sibling site of the , where this story first appeared.

Haven’t Seen Your Doctor in a Few Years? You May Need to Find a New One