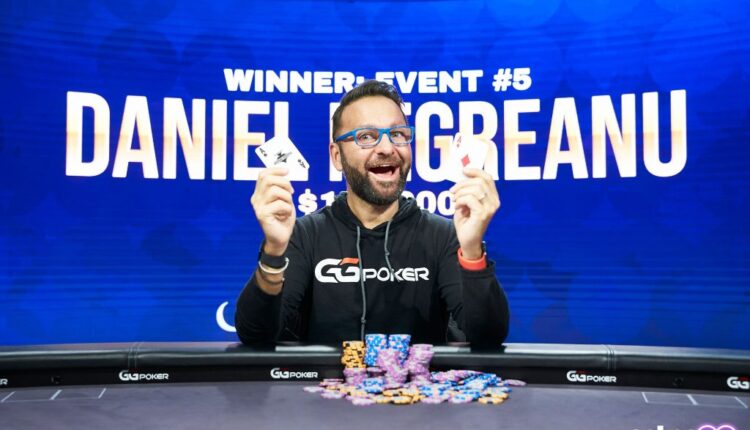 GGPoker’s parent company NSUS Limited received a license to operate a poker site in Ontario’s soon-to-launch online gambling market. It will not operate as its brand, but as WSOP.ca.

Daniel Negreanu’s bosses at GGPoker secured a spot in the poker champion’s home providence. Hey, it’s better than a picture of a map. (Image: Mark Gorman/PokerCentral)

It’s the second poker site to receive an iGaming license from the Alcohol and Gaming Commission of Ontario, joining 888 Holdings, which was also approved to run an online sports book and casino last week. PokerStars is expected to be approved soon.

While it’s unknown if WSOP.ca will be ready to go when gambling goes live in Canada’s most populous providence on April 4, 888 holdings promised it would.

“We are delighted to have been awarded a license by the AGCO and look forward to launching in the market when it officially opens,” said Itai Pazner, CEO of 888 Holdings in a press release. As a Group, our focus is on strengthening our presence and offering to customers across key regulated markets. To that end, Ontario represents an attractive long-term growth opportunity for 888 and this is an extremely strategically important milestone for us.

Pazner has reasons to be delighted, because starting April 4, his company will be only one of two online poker sites that players in Ontario will be able to access.

Cut off from the global market

Like Pennsylvania and Michigan in the United States, Ontario will only allow players physically located within its borders to play on its approved sites.

This means on April 4, online poker players will be shut off from the rest of the world and only be allowed to play on sites approved by their government, against players who must be located in Ontario.

Canada leaves the decision to regulate online gambling to its provinces. It does not stop its citizens from accessing the global poker market and sites have happily let the Canucks play — and will continue to allow to play in the other 9 provinces.

But Ontario lawmakers decided they wanted a piece of the $93 billion global market and passed legislation to regulate online gambling in 2021.

So while the online sites celebrate gaining a near monopoly in Ontario, online poker players will be stripped of options.

A country of gamblers

With a population of 14.8 million, Ontario will be the second largest online gambling market in North America. New York State, which just opened for online gambling business in January, sits at number one.

Ontario, like most of Canada, is filled with people who like to gamble. Ontario is the home to 70 casinos, and part of a country where 75% of adults have gambled. That’s about 19 million people fueling a $16 billion a year industry.

Ontario will be Dublin-based NSUS Limited’s first foray into the North American market, and it won’t be the last.

It received manufactures approval from the Pennsylvania Gaming Control Board last year. This allows NSUS to provide GGPoker software to any casino that wants to get into the online poker game in Pennsylvania.

Most of the casinos that hold online poker licenses in Pennsylvania already have partners. For example, 888 Holdings partners with the Harrah’s Philadelphia, but operates as the WSOP brand.

But Wind Creek in Bethlehem, Penn., does not, giving NSUS a potential date to the online poker party in the Keystone State.

Bob Pajich is a poker news reporter, creative writer, and poker player who never met suited connectors he didn’t like.

This site uses Akismet to reduce spam. Learn how your comment data is processed.

Other Articles Of Interest

Did you know about our poker forum?

Discuss all the latest poker news in the CardsChat forum