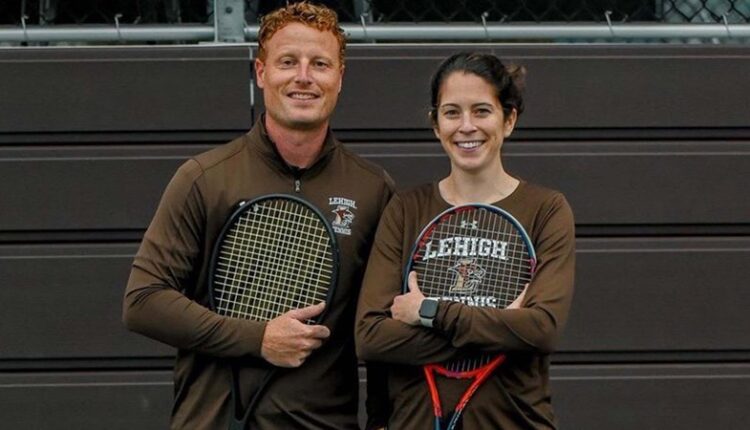 BETHLEHEM, Pa. – The Lehigh men’s and women’s tennis programs will be undergoing a transition this summer as Howard Talmud ’77 head men’s coach Wouter Hendrix and head women’s coach Sarah Hendrix will be leaving their respective positions later this month.

Wouter and Sarah Hendrix combined for 20 years of service to the Lehigh tennis programs. They will be leaving the Lehigh Valley to pursue new career aspirations.

“The decision to leave coaching was very difficult as I loved working at Lehigh and I will miss it dearly,” Wouter Hendrix said. “What makes Lehigh Athletics so special is its people and the vision of our department’s leadership. This has always been a place where there is opportunity to learn and grow. In an ever-changing world, the values ​​of Lehigh Athletics are timeless.”

“”The first word that comes to mind when I reflect on my time at Lehigh is family,” Sarah Hendrix said. “There are no words to describe how grateful I am for the lifelong relationships I have developed, professional experience I have gained, and the personal growth I have experienced as a result of the family culture of Lehigh Athletics, which has been built over the years by Joe Sterrett. I want to thank Joe for trusting me and providing me with an incredible opportunity to lead the Lehigh Women’s Tennis Program these past five years. The amount of support I felt from Joe and everyone in the Lehigh Athletics department was incredible, and is something that I believe is truly unique to Lehigh.”

Wouter Hendrix recently completed his 14th season at Lehigh and his 10th as the Howard Talmud ’77 head coach of the men’s program. He posted a 124-89 record in 10 seasons leading the Mountain Hawks’ men’s program and also guided the women’s team for three seasons between 2014 and 2017, leading the Lehigh women to a 31-27 mark.

In his 10 seasons leading the men, Hendrix mentored 19 All-Patriot League honorees, including at least two in every season in which all-league awards were given. In recent years, Zack Elliott ’22 and Harry Wang ’21 were three-time All-Patriot League honorees. Ben Gilman ’15 earned the final three of his four first-team all-league selections in Hendrix’s first three seasons.

“The future is bright for this team,” Hendrix noted. “Next year’s roster will be very competitive, and our alumni base’s engagement with the program is on the rise. I am happy with how I am leaving the program as I believe there is a foundation for success. The timing of my decision favors the hiring process in the sense that there will be ample time to find the ideal candidate for this attractive position. I wish our teams the best and will be their biggest fan moving forward.”

Prior to taking over the men’s team in the summer of 2012, Hendrix spent four seasons as an assistant coach working with the men’s and women’s teams under Dave Shook and also served as Director of the Lewis Tennis Center.

“I am grateful to Joe Sterrett and Dave Shook for giving me an opportunity to be part of the Lehigh Athletics community 15 years ago,” Hendrix said. “It has been an incredible experience. I want to thank Howard Talmud, the Petersen Family, Ron Ulrich, and Murray Goodman for their unwavering and generous commitment to our teams. I also want to extend my deepest gratitude to all the student-athletes, head coaches, administrators, support staff, and assistant coaches that I’ve had the pleasure of working with.

“Finally, I would like to give thanks to my entire family for always supporting me throughout the years. A special note of appreciation to my wife Sarah who is my rock; to my father Ivo who inspired me to be a coach, to my mom Hilde who is always there for me, to my brother Martijn, and to my children Leo, Juliet, Lily, and Ivo.”

Sarah Hendrix initially came to Lehigh as an assistant working with both the men’s and women’s programs in 2016-17 and took over as head coach for the women’s team for the 2017-18 campaign.

In five seasons leading the Mountain Hawks, Sarah Hendrix posted a 35-42 record. She won 11 matches in her first season (2018) and led Lehigh to his most recent Patriot League semifinal appearance.

“Each year as a team, we talked about our ‘why,'” Hendrix said. “What drives us day in and day out? To all of my players – you were always my why. Thank you for helping me become a better person and for teaching me more about life and about what it means to be human than you will probably ever realize.”

Auyeung became a four-time, first-team all-league honoree in Hendrix’s first season as Hendrix mentored four student-athletes to a total of five All-Patriot League honors. In addition to Auyeung, Paula Gonzalez was honored in 2018 and 2021, Sibel Can was recognized in 2019 and Hamsa Javagal earned second team honors as a first year following the recently completed 2022 campaign, where the Mountain Hawks battled through injuries to win five matches.

“Lehigh has given me and my family more than I can express, and I am forever grateful,” Hendrix said. “Although I am sad to leave behind such a special place, Wouter and I feel that it is in the best interest of our family to make a career change and move closer to family.

“Lastly, I want to express my excitement about the future of Lehigh women’s tennis. The university and athletic department’s commitment to the experience and leadership development of student-athletes is absolutely exceptional. The opportunities here are endless and I can’t wait to see what the future holds for this program.”

Searches for both the men’s and women’s head coaching positions are currently ongoing. Job postings can be found in the links at the top of this page.

Long Wait for Justice: People in Jail Face Delays for Mental Health Care Before They Can Stand Trial