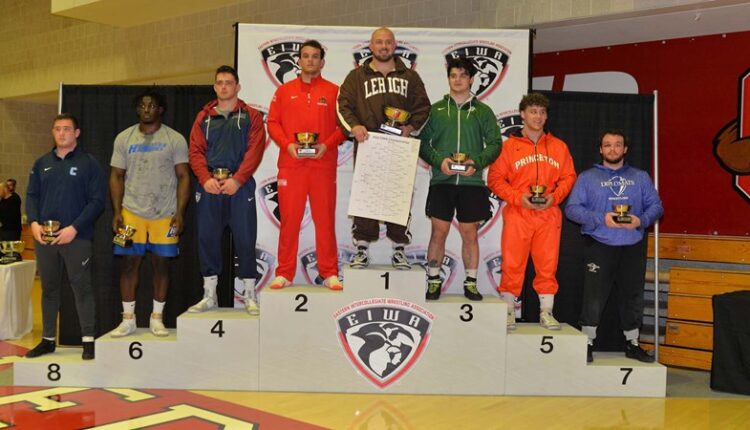 Wood extended Lehigh’s streak of consecutive seasons with at least one individual champion to 23. He also won the Fletcher Trophy for career team points scored at the EIWA Tournament for the second straight year.

In all, Lehigh had eight place winners and qualified five wrestlers for the NCAA Championships. The Mountain Hawks finished in fourth place with 111 points. Cornell won his first title since 2017 with 153 points. Penn finished second with 143, followed by Princeton with 120.5.

“As always, they competed really hard,” Lehigh head coach Pat Santoro said. “We’re a really young team and sometimes that came out in matches where we made some little mistakes. The effort was great. We were hoping to push a few more guys through, which is tough because you don’t want to see anyone’s season come to an end.”

The only scoring in Wood’s finals bout came in the second period, when he scored a reversal with 48 seconds into the frame. He rode out the rest of the period. In the third, Fernandes took neutral but neither wrestler was able to score.

“You’re not going to find a better human being,” Santoro said of Wood. “To be the first to do that is pretty impressive. This tournament is hard to win once, and he did it five times. I couldn’t be happier for him.”

Earlier Sunday, Wood punched his finals ticket and clinched a spot at NCAAs with a 2-1 semifinal win over Penn’s Ben Goldin.

Lehigh had a trio of third place finishers, all of whom qualified for NCAAs. First-year Max Brignola bounced back from a semifinal loss to win two consolations and claim third at 149. He scored a late takedown to been Columbia’s Danny Fongaro 5-4 in the consolation semifinals and then won 5-3 over Princeton’s Marshall Keller for third place.

Junior Josh Humphreys’ bid for a third straight title at 157 was derailed by a surprising defensive fall called against him late in the first period in his semifinal against Navy’s Andrew Cerniglia. Humphreys was up 2-0 at the time of the defensive fall. He bounced back with two wins in the consolations, including a 10-0 major decision over Army’s Markus Hartman in the third place bout.

“Josh did everything right in this tournament,” Santoro said. “He pretty much dominated everybody he wrestled. He was winning that match when the call happened. You can’t control those things. Life isn’t always fair. You have to control what you can control. He put that behind him. He was devastated, obviously. He came back and beat two really good kids and did it in dominant fashion. It was good to see.”

Sophomore AJ Burkhart won three matches in the consolations Sunday to finish third at 184. In the morning he won 6-3 over Binghamton’s Cory Day and then needed a late takedown to beat Penn’s Neil Antrassian 6-5. With an NCAA bid at stake, Burkhart used a second period takedown and third period escape to edge Charles Small of Hofstra 3-2, punching his ticket to Detroit.

“AJ was lights out,” Santoro said. “He made some adjustments. He always wrestles hard but today he was really relaxed and kept his intensity. He was mentally tough and fought through it and I’m so happy for him. He needed to do it the hard way. To come back and take third, that’s not easy to do.”

Lehigh’s fifth automatic qualifier is first-year Connor McGonagle, who took fourth at 141. McGonagle won twice in the morning session, punching his NCAA ticket with a 2-0 win over Binghamton’s Ryan Anderson. He dropped his third place bout 10-5 to Wil Gil of Franklin & Marshall.

First-year Jake Logan finished fifth at 174, missing an automatic NCAA berth by one place. He dropped semifinal and consolation semifinal bouts on Sunday and earned a win by medical forfeit for fifth.

The Mountain Hawks also had a pair of sixth place finishers. First-year Sheldon Seymour opened the day for Lehigh with a technical fall at 125 but dropped his consolation semifinal match and medically forfeited in the fifth place match. Classmate JT Davis opened his day with a 2-1 tiebreaker win at 197 to reach the consolation semifinals, but finished sixth after a pair of losses.

Lehigh’s qualifiers will move on to the NCAA Championships, Mar. 17-19 in Detroit. At-large selections will be announced Tuesday, with the seeds and brackets unveiled Wednesday at 6 pm Seymour, Logan and Davis along with sophomore Brian Meyer and first-year Malyke Hines are all eligible for an at-large selection.

Improvements to be made to infrastructure damaged by Hurricane Irma | News, Sports, Jobs