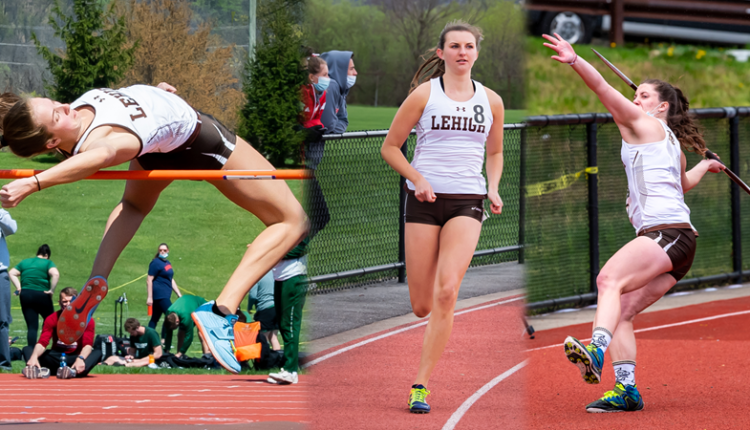 The Mountain Hawks competed in two meets this weekend, with distance runners competing at the Raleigh Relays on Thursday and Friday. On Saturday, Lehigh sent a majority of the team down to Annapolis, Md. to compete in the Navy Invitational.

Lehigh’s distance group finished the weekend with 10 PRs. On Thursday, senior Jamie Zamrin kicked things off for the Mountain Hawks in Raleigh. Zamrin finished the 10k with a PR of 35:55.02 and is now third all-time in Lehigh history.

“Anybody who runs the 10k knows that everything has to go perfect for that race,” said head coach Matt Utesch. “Jamie made the decision to run it and she went out and ran the race plan that her and Coach Deb [Utesch] set up and it paid off. We knew she was good but now we’re wondering how good can she be?”

The Mountain Hawks continued to finish with more PRs during their races at NC State. Seniors Jade Sessions, Julia Dorley, Kara Bonner and Hetty McMillan all finished Friday’s 1500m race with PRs. The four seniors, who made up the first-place 4×800 relay team at the indoor Patriot League Championships, all had a solid start to their final season at Lehigh.

“You have to give credit to Coach Deb, who just had two massive knee surgeries and didn’t travel but had her distance girls tear it up in Raleigh,” Utesch said. “They took this long van ride to Annapolis and tore it up again. The girls proved they were able to do it indoors and now they can do it outdoors.”

The Mountain Hawks continued to have a solid start to the outdoor season, finishing the Navy Invitational on Saturday with six PRs and three first-place finishes.

Lehigh’s distance group continued to add more PRs on Saturday in Annapolis. Three Mountain Hawks finished the 800m with a PR. Leading the way was Dorley who finished first with a time of 2:14.53. McMillan was close behind, finishing second with a PR of 2:14.76 while Bonner finished fifth with a PR of 2:16.35.

Junior Allison Duane was able to grab a new PR in the 1500m. Duan finished with a time of 5:18.29 on Saturday. In the 3000m, first-year Savannah Beavers had a solid start to her first outdoor season at Lehigh. Beavers finished second with a time of 10:17.32 and is now seventh all-time.

Lehigh’s sprints group added more PRs and top finishes for the Mountain Hawks on Saturday. In the 100m, first-year Melissa Cunningham finished second with a time of 12.28 and is now fourth all-time. Fellow first-year Stephanie Webb followed close behind, finishing third with a time of 12.79. Sophomore Ashley Struck finished behind Cunningham and Webb with a new PR of 12.83.

“Jordyn was such a hard worker today and you’re going to see her get better and better throughout the season,” said Utesch. “She was a real superstar today.”

The Mountain Hawks added to their Saturday success with several PRs in field events at Annapolis.

Seniors Teasha McKoy and Veronica Meyer kicked off their final outdoor season at Lehigh with solid marks in the throws. McKoy finished second in the shot put (13.58m) and fourth in the hammer throw (45.54m) while Meyer finished second in the javelin (40.22m) and fifth in the hammer throw (42.70m). Sophomore Karina Roze finished third in the javelin (39.98m) while senior Carly Carpino secured a new PR of 33.14m.

Lehigh’s jumps group was able to put up some impressive marks at Navy, with Casey Talamini-Kelemen leading the way for the Mountain Hawks. The first-year finished second in the triple jump (11.49m) and seventh in the pole vault (3.12m) in her first outdoor meet as a Mountain Hawk. She is now seventh all-time in the triple jump.

“We had heavy training this week so for the women jumpers to come out and pick up where they left off in indoor is remarkable,” Utesch said. “They’re proving they’re going to be better in outdoor than in indoor.”

Fellow first-year Keisha Modi also found success in her first outdoor meet at Lehigh. Modi finished second in the long jump with a mark of 5.47m. In the high jump, sophomore Kerry Perna secured a first-place finish for Lehigh. Perna finished with a mark of 1.60m, tying with Bucknell’s Karen Hull.

The Mountain Hawks will head back to the Lehigh Valley to prepare for their annual dual meet against Lafayette. Lehigh will head to Easton, Pa. to take on Lafayette on Saturday, April 2.