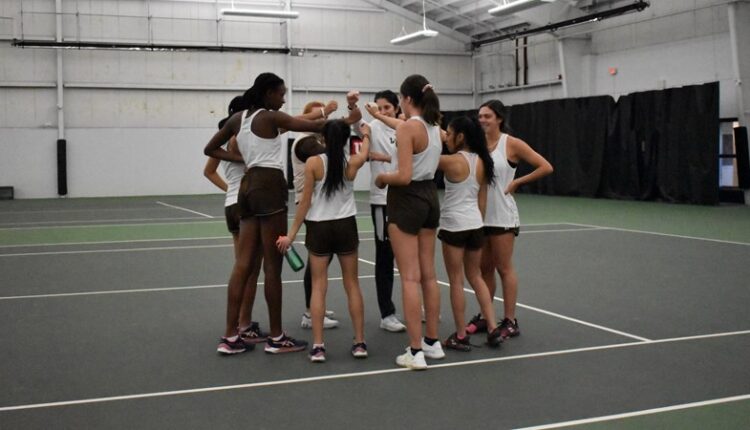 Women’s Tennis to Open Up Fall Season This Weekend

BETHLEHEM, Pa. – The Lehigh women’s tennis team will open up the fall season this weekend in Annapolis, Md. at the Navy Invitational. The Mountain Hawks are entering a new era this year with the addition of head coach Olivia Leavitt.

This weekend’s tournament will feature three doubles flights and five singles flights. Lehigh will be one of the eight teams competing in Annapolis this weekend. Participants include Binghamton, George Mason, Johns Hopkins, Mary Washington, Monmouth, St Bonaventure and Navy.

“I think starting this year with three first-years coming in and five returners, there is a lot of new energy but I think also with the returners having a new coach, they’re excited about the consistency and structure,” said Leavitt. “I think the team is really excited this year for a new chapter and to really start implementing more consistency and more structure into practices and goal-setting.

“We’re really trying to define a new culture here moving forward that incorporates not only Lehigh’s values ​​but the values ​​that we are going to establish as a team moving forward in this new era.”

Leading the Mountain Hawks this season is senior Junmoke James. James tallied six singles wins at the No. 2 spot last year and finished the season with five wins in doubles.

The Dania twins will also be returning for Lehigh this season. The duo both finished with a team-high eight singles wins and ten doubles wins last year.

Allyce Gaborik and Hamsa Javagal are entering their sophomore season for the Mountain Hawks. Javagal, who was named second team All-Patriot League, tallied seven wins in singles play, including a 4-0 record at the No. 2 spot.

“I think the first-years honestly bring a ton of energy on the court,” Leavitt said. “I think they’re all pretty extroverted and want to be a part of this team experience and so they bring a lot of competitive energy but also loud, positive culture energy which I think is good for the team moving forward into the new era. ”

Lehigh will compete in three more invitations in this fall before wrapping up the fall season with a home match. Following the Navy Invitational, the Mountain Hawks will host their annual Lehigh Invitational on Saturday, Sept. 17 and Sunday, Sept. 18.

Lehigh will travel to West Point, NY for the Army Invitational from Sept. 23 to Sept. 25. To wrap up the tournament portion of the schedule, the Mountain Hawks will compete at the ITA Regionals. Princeton will host the ITA Regionals from Friday, Sept. 30 until Monday, Oct. 3.

To close out the fall season, Lehigh will host Monmouth on the Ulrich Varsity Courts on Saturday, Oct. 15. The match is set to begin at 12 p.m