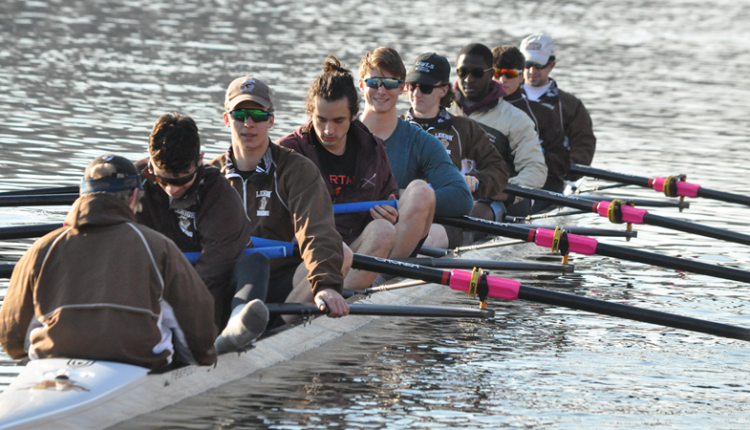 Women’s and Men’s Rowing Both in Action on Saturday

“The seniors have really stepped up [in the preseason],” said Lehigh head coach Brian Conley. “This group has done a great job in terms of bringing our culture along, but at the same time, trying to keep things fun and exciting for them. And as the races approach, we’ll find out what speed we have.”

The men just became new members of the MARC (Mid-Atlantic Rowing Conference) last year, adding to the excitement of this season.

“Bucknell is a pretty fast team. Villanova showed us some speed this past fall, but I think we have a great group of guys who can probably take them down if we get the opportunity,” said Conley.

Last season was especially short for the men, with limited regattas. The Mountain Hawks couldn’t be more excited to open a more traditional spring season.

“They’re a small group and they have a good group in terms of attitude when they get to the boathouse,” said Conley. “They’re a fun group, but once you get them into the boat, they take things pretty seriously. And we’ve been trying to change things up here and there for them to try to make things more competitive. It ultimately comes down to what happens on race day.”

Saturday will be the second race day for the women, who kicked off their spring against Saint Joseph’s and Delaware last weekend. The Varsity Eight led the way with a second-place finish, finishing in 7:32.8 – ahead of Saint Joseph’s in third (7:33.9). That earned Lehigh honorable mention on the Patriot League weekly honor roll. The Mountain Hawks also placed an entry in the Second Varsity Eight, Third Varsity Eight and Varsity Four.

“The women worked on holding each other to a higher standard this week in all aspects of the sport,” said Conley. “After having only one boat race well last week, we decided we needed to execute with more intent in practice and I think we were able to learn how to do that.”

Following Saturday’s racing, both the Lehigh women and men return to action at the Murphy Cup on the Schuylkill River in Philadelphia.

“This week is a great challenge for us to rise up to,” said Conley. “All the teams this weekend have shown consistent annual success. We are looking to see if we can take what we have been doing in practice and stay internal within our boats and execute the speed we know we have.”

Reaction to the RaDonda Vaught Verdict: KHN Wants to Hear From Nurses