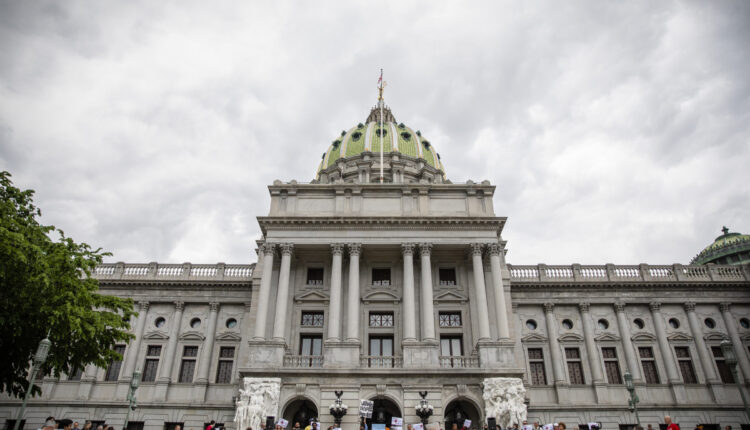 Gov. Tom Wolf filed a lawsuit Thursday against the Republican-led General Assembly over its late-night passage of a package of proposed constitutional amendments that includes a ban abortion in Pennsylvania.

Wolf asked the state Supreme Court to find that the Pennsylvania Constitution explicitly recognizes an individual right to privacy, including the right to end a pregnancy.

“The Republican-led General Assembly continues to take extraordinary steps to dismantle access to abortion and implement a radical agenda. Frustrated that their legislation may face my veto pen again, they instead loaded multiple unrelated constitutional amendments into ​a joint resolution and rammed the bill through during the budget process,” Wolf said.

Lawmakers passed Senate Bill 106 with a vote in the House shortly before 10 p.m. on July 8 after sending the 2022-23 budget to Wolf’s desk. Opponents of the abortion amendment say it creates a pathway for legislation restricting abortion that could not be overturned by courts.

It includes an amendment that would state the Constitution does not guarantee any rights to abortion or public funding for abortion. The package also includes amendment language for voter identification, election audits, allowing gubernatorial nominees to choose their running mates, and allowing  lawmakers to disapprove regulations without facing a gubernatorial veto.

The amendment language must be approved in two consecutive sessions of the General Assembly and by voters in a referendum that could be as soon as the May 2023 primary. Constitutional amendments are not subject to gubernatorial veto.

Since 2015, Wolf has vetoed three bills relating to abortion from the General Assembly.

The filing asks the Supreme Court to use its authority to take any case without first going through the lower courts – known as the court’s King’s Bench power.

Wolf’s office said in a statement that the governor and acting Secretary of State Leigh Chapman went directly to the Supreme Court because the Department of State is required to begin to advertise the amendments by Aug. 2.

“Make no mistake, this is a coordinated effort to take away reproductive rights. Further, Republicans moved Senate Bill 106 with the goal of creating a path toward an abortion ban without public debate and under the cover of night,” Gov. Wolf said. “Today, in the light of day, I am fulfilling my commitment to do everything I can to protect these rights.”

Former Secretary of State Kathy Boockvar resigned in 2021 after her office failed to advertise an amendment that would have created a two-year window for survivors of childhood sexual abuse to sue their abusers even if the statute of limitations has expired on their claims. The mistake meant that the amendment could not be put to a referendum.

Democratic lawmakers who opposed the amendment were critical of Republicans who insisted that the amendment would change nothing about access to abortion services in Pennsylvania.

“You want to ban abortion and that is your right,” Rep. Matt Bradford, D-Montgomery, said after House Majority Leader Kerry Benninghoff, R-Centre, refused during a floor debate the night the amendments passed to answer questions about the proposal. “You have to have the intellectual honesty and integrity to defend what you are doing.”

On Wednesday, Sen. Judy Ward, R-Blair, said in a statement that the amendment had been the subject of falsehoods circulating in the media.

“The amendment would simply preserve the status quo, keeping the fate of abortion policy out of the hands of unaccountable judges and in the hands of those who are accountable to the people, their elected representatives in the legislature,” Ward said.

The statement continued, saying that Pennsylvanians would still have the right to an abortion under the Abortion Control Act and that Medicaid would continue to cover non-elective abortions and voluntary abortions in the case of rape or incest.

“Our job as elected representatives is to create public policy that represents the will of the people. I can think of no better way to do that than by putting these issues in front of the voters through Senate Bill 106.”

With millions in federal funding, PennDOT charges ahead on EV infrastructure development in Pa.