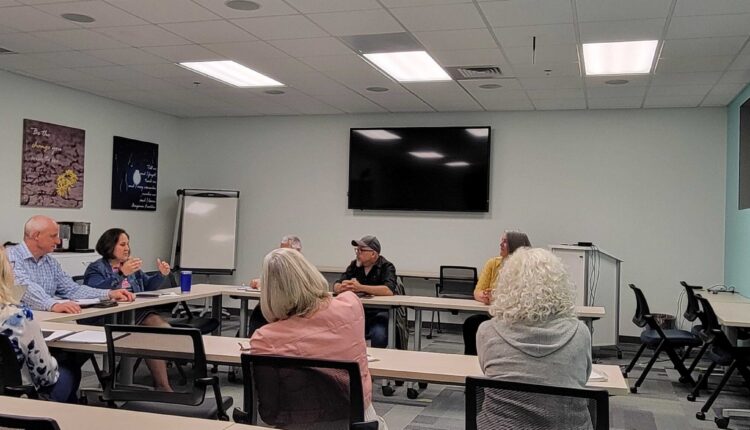 While her time in office may be limited, Pennsylvania Department of Drug and Alcohol Programs Secretary Jen Smith said making sure there are no disruptions to services leading up to the transition to a new administration is a top priority.

“From a taxpayer perspective, my job is to keep the gas pedal pressed as far down to the floorboard as I can until the very last moment that I’m here,” Smith said.

To that end, Smith and DDAP staff continue to meet with stakeholders at the local level to get a better sense of how their limited time and efforts can best be spent.

On Wednesday, Smith led a roundtable discussion with the agency’s Parent Panel Advisory Council, a group of parents from across the commonwealth who have first-hand experience parenting children affected by substance use and substance use disorders, and who make recommendations to DDAP regarding support services.

For more than an hour, the group shared their stories and experiences from across Pennsylvania with Smith.

“These are all issues that we’ve talked about for the last six years as I’ve been part of this department, but I think they are raising in priority in terms of needing to address some of these bigger systemic issues,” Smith told the Capital-Star.

The parents’ panel told Smith at Wednesday’s meeting that they’ve had varying degrees of success with bringing substance use-related programming and education into their local schools.

Barbara Senst, a panel member from Montgomery County, said she is starting to make progress with local school districts on bringing educational resources to students.

“We’re making a big push into the schools now, which is finally becoming accessible,” Senst said, adding that it’s taken a lot of outreach to make such collaborative efforts happen.

Senst also raised concerns that schools are utilizing out-of-date methods when teaching children about substance use and substance use disorders.

She added that through talking with local students, she found out that “scare tactics” were still being used to keep students away from drugs, but little more was being done to educate them on how addiction works and how to find resources, should they need them.

“Why is that happening?” Senst asked the group.

Smith said that “schools are a huge issue” for the department in terms of outreach, education and prevention.

“There’s hundreds of school districts in Pennsylvania. And each one makes their own decisions about what kinds of programming they implement, and at what grades, and there’s varying support for those programs – with both the administrators and the teachers,” she said. “So I think what I heard today was there needs to be a renewed interest in communicating with those schools about setting some standards for what needs to be provided in those settings.”

Other parents’ panel members raised concerns about stigmas and inconsistencies in the commonwealth’s criminal justice system, in which judges can dole out very strict or very light sentences.

“The thorn in my side has been the judges,” Regina Slenker, a panel member from York County, said. “There’s little consistency between the judges when you are up in front of them.”

Carmen Capozzi, of Westmoreland County, whose son Sage Capozzi died as a result of a fatal overdose in 2012, told the group how difficult it can be for families to find and access resources.

“I didn’t know how to help my son, I just wanted him to get it,” Capozzi said, adding that local groups and churches could do more to support families affected by substance use disorder.

With all of those concerns in mind, Smith said the department will begin looking at how it can turn those issues into actionable items in its next strategic plan “regardless of who’s in leadership at that time.”

So far, Smith said, the department has already taken several steps to keep the momentum through campaigns and new programs.

Through its recently announced $10 million student loan repayment program for professionals in the substance use treatment field, the department is hoping to boost retention among case workers and treatment practitioners in Pennsylvania who have had to endure the emotional toll of the job while coping with the COVID-19 pandemic.

“We felt it was really important to start focusing on how we can provide benefits to people who are already in the field, because we don’t want to lose them,” Smith said. “Yes, we want to  attract new [people], but let’s hold on to what we got.”

The department also recently adjusted its “Life Unites Us” multimedia campaign, which began two years ago as a collaboration between state officials, addiction researchers, and community advocates – to address stigma related to stimulants and polysubstance use – issues which are on the rise in Pennsylvania and nationally.

“This is really a behavior change campaign,” Smith said, “And it uses a collective impact model to make a difference. So it’s not just an advertising campaign – It’s an actual campaign that embeds itself in some of those more traditional platforms that use community-based organizations to generate and distribute the content.”

“It truly was a public health approach instead of a media-based approach,” Smith said.