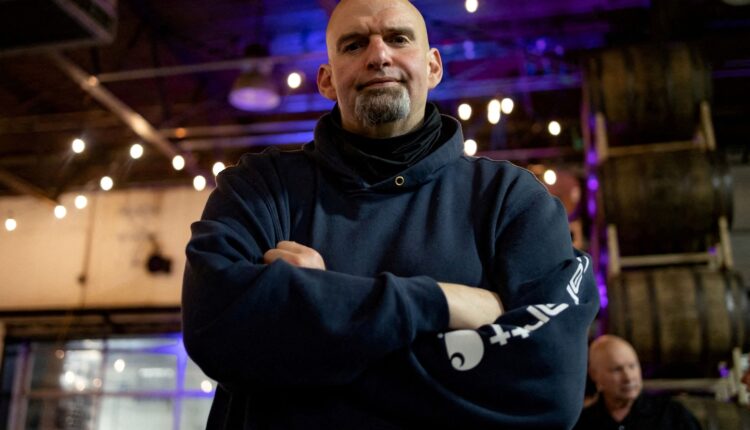 Will Pennsylvania vote for a Harvard grad with a working-class image?

John Fetterman — the newly selected Democratic nominee for US Senate from Pennsylvania — isn’t your typical, Brooks Brothers-wearing politician. Known for sporting hoodies and oversize gym shorts, Fetterman’s unpretentious, working-class vibes have made him a cultlike figure, not only in the Keystone state but nationally.

And yet potential GOP rival Dave McCormick — still in a dead heat for the state’s Republican Senate nomination — recently attacked Fetterman as an out-of-touch elitist. McCormick, a Princetonian and former hedge fund CEO, told Fox News’s Laura Ingraham last week, “I don’t think [Fetterman’s] authentic … there’s a history there of a guy that went to Harvard and has a trust fund.”

Who does Fetterman appeal to when he portrays himself as a salt-of-the-earth, blue-collar candidate? And can McCormick’s criticism — that Fetterman is actually an Ivy League-educated trust funder — be effective? Here’s what my research finds.

In attacking Fetterman’s time in Cambridge, Mass., McCormick was playing on a long-standing trope within conservative political circles: of treating Harvard as a four-letter word. Legendary National Review founder William F. Buckley Jr., for example, famously declared that he “would rather be governed by the first 2,000 people in the telephone directory than by the Harvard University faculty.”

In that vein, Mitt Romney (a Harvard alumnus) smeared Barack Obama for policies sourced from the “Harvard faculty lounge.” Similarly, Christine O’Donnell, a former tea party candidate for the US Senate, once ran to ad assuring voters, “I didn’t go to Yale. … I’m you.”

If you believe Trump won the 2020 election, you may believe in Bigfoot

My research with Carlos X. Lastra-Anadón shows that the answer is nuanced. We recently ran a national survey experiment through the Digital Lab for the Social Sciences (DLABSS) at Harvard, which relied on a diverse, opt-in volunteer sample of more than 700 US adults. The experiment presented subjects with hypothetical biographies of politicians running for state office and asked them to judge the candidates on their perceived competence and relatability. Unbeknown to the participants, however, we randomly varied whether the candidates attended an Ivy League school (Harvard, Yale or Princeton) or a comparable, less-elite private university (Lehigh University, Northeastern University or Boston University).

Respondents’ evaluations of elite-educated politicians varied according to two main factors: their own ideology and what aspect of the candidate they were assessing. Self-identified liberals viewed politicians who went to elite schools as more competent, but rated their personalities as no more or less relatable than those who attended less elite schools. By contrast, conservatives judged elite-educated politicians as less relatable, but no more or less competent. On balance, however, having a prestigious degree didn’t appear to affect a candidate’s overall ballot box appeal.

Still, new scholarship does suggest that elite-educated politicians might in fact govern differently. A study by scholars Craig Volden, Jonathan Wai, and Alan E. Wiseman examined the legislative records of US House and Senate members from 1973 through 2014. They documented that, among both Democrats and Republicans, members of Congress who attended a highly selective university tended to vote with the more liberal wings of their parties and were also more willing to propose large, sweeping bills.

Relying on a working-class image

Fetterman’s narrative of being a self-made man — the son of a former grocery clerk at ShopRite — is a popular theme for politicians who want to promote their “down-to-earth” credentials. Yet it’s rare that candidates with truly humble roots are actually elected to power. Analyzes show that less-affluent politicians are massively underrepresented in the halls of Washington because they seldom run for public office.

Yet as political scientists Nicholas Carnes and Noam Lupu have shown, Americans are generally open to voting for politicians from working-class backgrounds when given a chance. Using a “conjoint” experiment — which presented a pair of candidates side-by-side and then randomly varied their occupations — they found that US respondents were marginally more likely to cast ballots for a candidate described as a factory worker than a business owner.

Moreover, voters appear to use social status as a shortcut through which to guess what type of policies politicians might push once elected to office. Another study by Carnes and Meredith L. Sadin, for example, discovered that Americans perceive candidates from less-privileged backgrounds as more likely to support a progressive economic agenda — even if the evidence isn’t clear that they actually will.

Related research suggests that it’s not just social status and upbringing, but also everyday choices that signal solidarity with average citizens that can endear politicians to voters. Even apparently minor details can matter. In research I’ve published with Leslie K. Finger and Andrew Miner, for example, we found that politicians who send their children to public schools instead of private schools were viewed as more relatable and more committed to public services — both qualities that boosted their electability.

MAGA was the real winner of Ohio’s primary

It’s not just policy and personality that influence voters’ support for a politician. Background traits matter, too. Having little time to follow campaigns means that Americans frequently rely on traits such as education and social class (as well as characteristics like race, gender and age) to form their opinion of candidates. It’s not surprising that candidates go to such lengths to emphasize — or downplay — selective parts of their identity.

Whether John Fetterman can take his Harvard diploma and hoodie fashion to Capitol Hill remains to be seen. But if Dave McCormick does earn the Republican nomination, don’t be surprised if Fetterman launches a counterstrike over authenticity: Does a Princeton-PhD-turned-former-Bridgewater-executive really spend his days motorcycling around rural Pennsylvania with MAGA voters draped in black Leather jackets and Trump flags?

Don’t miss any of TMC’s smart analysis! Sign up for our newsletter.

Thomas Gift (@TGiftiv) is associate professor of political science and director of the Center on US Politics at University College London.