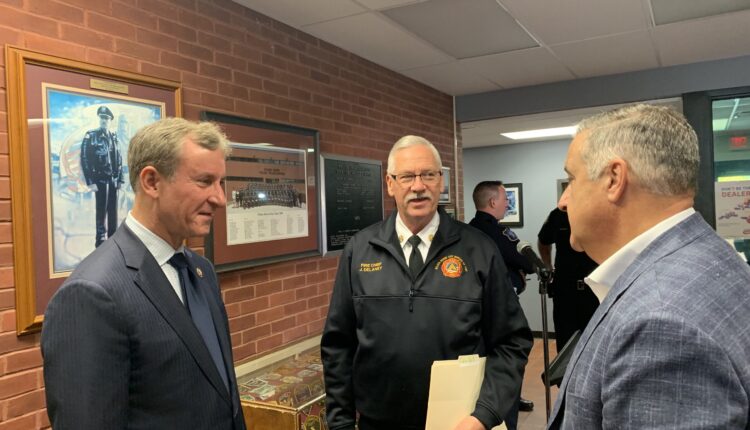 Cartwright has spent a lot of time recently promoting funding for police departments in the region while he’s in the midst of a tough reelection fight against Republican Jim Bognet.

It’s the second straight election cycle that featured a battle between the duo. Cartwright beat Bognet by 3.6 points in 2020. It was his lowest margin of victory since winning his seat by 22 points in 2012.

This year could be even closer. Former President Donald Trump won the district, which includes all of Lackawanna, Pike and Wayne counties as well as parts of Luzerne and Monroe, by 4.4 points in 2020.

The battle for control of Congress: Abortion, inflation, crime and Biden

Bognet has tried to paint Cartwright as soft on crime, sending out a mailer that claimed Cartwright wanted to defund the Wilkes-Barre Police. It’s an accusation Bognet leveled at the Democrat in 2020. Politifact called the claim false.

Inflation, crime and immigration topped voters’ priorities list in the latest Harvard CAPS-Harris Poll, according to The Hill, a publication that covers Congress. And there’s evidence that the ploy is working.

In Pennsylvania’s nationally watched U.S. Senate race, Republican Mehmet Oz and his allies have plastered the Keystone State’s airwaves with commercials attacking his opponent, Democrat John Fetterman, for being soft on criminals during his tenure as the chairman of the state Board of Pardons.

After enjoying a wide advantage through the summer, Fetterman holds a slender polling lead as the race heads into its final days, according to the RealClear Politics polling average.

In response to those attacks, incumbents such as Cartwright have gone on offense. The Democrat has been been stumping for funds he’s brought to the district.

In May, he promoted $2 million that was going toward reducing gang, drug and gun violence in Lackawanna County.

In June, Cartwright touted $3 million for his own borough’s proposed new combined police and fire facility. The Moosic Borough police department had been damaged by mold.

“I can’t tell you how much time I spend in our nation’s capital bragging about our police in Northeastern Pennsylvania,” Cartwright said. “We don’t seem to have the problems that we see in other places in the country. You know why? Our police are fantastic. They understand community policing.”

Bognet is endorsed by Fraternal Order of Police Lodge 36.

Bognet released a statement when he got the endorsement touting his support of law enforcement.

“They should always feel like their political leaders have their backs while they are protecting our communities,” he said, “and in Congress, I will.”

Collaboration, instead of lower standards, is a better fix for teacher shortages | Roger Chesley