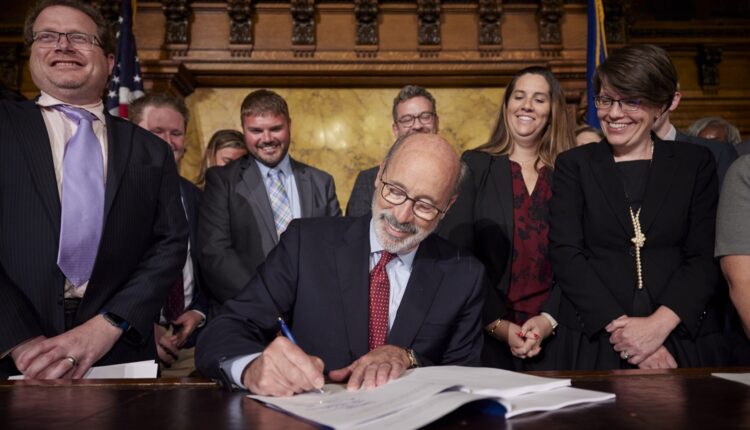 As leaders in the Pennsylvania General Assembly negotiated the 2022-23 budget in recent weeks, the House and Senate sent a slate of controversial and potentially transformative stand-alone legislation to Gov. Tom Wolf’s desk.

Wolf has since vetoed four Republican-backed bills and signed at least five bills that were closely watched in the days before the budget process ended Friday.

The Senate voted 30-20 last month to approve a bill banning transgender girls and women from girls’ and women’s scholastic sports, despite Wolf’s promise to veto it.

Rep. Barbara Gleim, R-Cumberland, introduced the legislation, saying it ensured fairness for all and preserved athletic opportunities for women. Democrats said the legislation would isolate transgender people, with Sen. Maria Collett, D-Montgomery, calling the proposal “a radical solution in search of a nonexistent problem.”

In his veto message, Wolf said the legislation discriminated against a vulnerable group of students already susceptible to bullying and depression, and who are at-risk for suicide. Even if it were enacted, the legislation would have faced legal challenges for violating federal law and constitutional guarantees of equal protection.

“The LGBTQ+ community in Pennsylvania and around the country, and especially our transgender and nonbinary youth and young people: I see you, I support you, I respect you, and I stand with you,” Wolf wrote in his veto message.

Sen. Doug Mastriano, of Franklin County, the Republican nominee for governor, introduced legislation to allow registered voters to serve as poll watchers anywhere in the commonwealth, rather than in the county where they are registered, as the law currently requires.

House State Government Committee Chairperson Seth Grove R-York, which advanced the bill on June 22, said poll watchers serve as “checks and balances” on the election system and that giving candidates more access to the polls was a good thing.

Wolf said in his veto message that the bill would make it possible for bad-faith partisan actors to target specific locations and groups of people to make baseless challenges to voters’ qualifications, making it harder and slower for election officials to do their jobs.

“Our elections work best when members of the community work together to make sure everyone’s voice is heard,” Wolf said, urging lawmakers to work on legislation to ensure that voters can safely exercise their right to vote.

Sen. Gene Yaw, R-Lycoming, whose district covers a wide swath of Marcellus shale country, introduced legislation to prohibit municipalities from restricting the types and sources of energy that consumers may use for homes and businesses.

Yaw, chairperson of the Senate Environmental Resources and Energy Committee, argued that giving consumers the right to choose  how they heat and power their homes is especially important with inflation and utility costs skyrocketing.

Wolf vetoed the bill Monday, saying it would create an impediment for municipalities to address the threat of climate change and stand in the way of energy incentives and initiatives.

Wolf added that the bill was unnecessary because the Pennsylvania Public Utility Commission already regulates utility services. Finally, Wolf said the bill is overly broad and would lead to unintended consequences and litigation against municipalities.

Wolf vetoed a piece of budget-enabling legislation known as the Human Services Code bill because it included language that would have prevented the Department of Human Services from contracting with vendors to provide financial management and payroll services for home health care providers. He approved the remainder of the language  after it was amended to the Fiscal Code – another budget-enabling bill.

Wolf signed legislation Monday banning county boards of elections from soliciting or accepting money for election administration from individuals or outside organizations. It also creates an election integrity grant program that will provide aid to counties to conduct elections.

The 2022-23 budget includes $45 million that will be available through the Department of Community and Economic Development to counties that apply by Aug. 22.

The bill was introduced by Sen. Lisa Baker, R-Luzerne, in response to a controversy over private money that some counties received in the 2020 election cycle dubbed “Zuckerbucks” because it was provided by Facebook founder Mark Zuckerberg’s foundation.

After the Commonwealth Court last month invalidated a PennDOT plan to use tolls on interstate highway bridges to pay for repairs and replacement, the Senate passed legislation to prevent the agency from collecting user fees in conjunction with the project.

PennDOT’s Public-Private Transportation Partnership Board announced a plan to repair or replace nine bridges in cooperation with private developers, drawing scrutiny and criticism from state lawmakers.

Wolf signed legislation Monday introduced by Sen. Wayne Langerholc, Jr., R-Cambria, , that would allow PennDOT to move forward with the construction projects without tolls while preserving engineering and design work that has already been completed.

The law also improves transparency in the P3 Board’s procedures, allows for public comment and reduces PennDOTs authority to impose tolls for new infrastructure and gives the state Legislature time to assess projects approved by the board, Langerholic said in a statement.

Two pieces of legislation to increase the availability and quality of affordable housing became law during the budget process.

Wolf signed legislation introduced by Rep. Jared Solomon, D-Philadelphia, that allows municipalities to provide tax exemptions for developers who improve homes and apartments in need of repair and incentivize the construction of new low-cost housing.

Legislation proposed in the Senate by Sen. Nikil Saval and in the House by Rep. Sara Innamorato, D-Allegheny; Rick Krajewski D–Philadelphia; and Jordan Harris D–Philadelphia, who serves as the House Democratic Whip, to create a whole-home repair program for homeowners was included in the budget.

The program would provide up to $50,000 to qualified homeowners and owners of low-income rental properties as a grant or loan to repair, update, and adapt homes across Pennsylvania.

The program also provides staff to help people get the assistance they need and funding for workforce development in related fields.

The budget includes $125 million in federal pandemic relief money to be distributed by the Department of Economic and Community Development.

While Wolf signed a bill appropriating nearly $600 million in funding for Penn State, the University of Pittsburgh, Temple University and Lincoln University, language tying the funding to a ban on fetal tissue research got left behind in the Senate Rules Committee.

Republican lawmakers had Pitt’s share of the money in their sights because of fetal tissue research performed by UPMC.

Although the state funding for state-related universities is used only to provide tuition discounts for Pennsylvania residents, Republican lawmakers attached a rider to the appropriations bill requiring the universities to swear under oath that they did not perform such research.

Democrats warned that the restriction could upend thousands of students’ educations if the tuition discounts were no longer available.

House Republicans did an end-run around the requirement for a two-thirds majority vote on appropriations for non-governmental organizations by splitting the funding and the restriction into separate bills. Both passed in the House, but the Senate did not vote on the fetal tissue research restriction.

No double jeopardy for summary offenses

In a speech on the House floor last week Speaker Bryan Cutler, R-Lancaster, told the story of a constituent whose father was badly injured when another motorist made an illegal u-turn in front of his motorcycle.

The motorist got a ticket for the illegal maneuver, which he promptly admitted, pleading guilty to the summary traffic offense and paying a fine.

“While my constituent’s father passed away a few weeks later, no further charges could be brought because he had already been adjudicated for the incident,” Cutler said.

Wolf on Monday signed legislation introduced by Sens. John Gordner, R-Columbia and Vincent J. Hughes, D-Philadelphia, that will allow prosecutors to pursue additional charges for an illegal act after a person has been convicted of a summary offense based on the same conduct.

Speaking before the House passed the bill with a 183-17 vote, Cutler said the constituent’s case could have been handled differently by police, but the proposed law ensures a minor traffic violation wouldn’t preclude more serious charge.