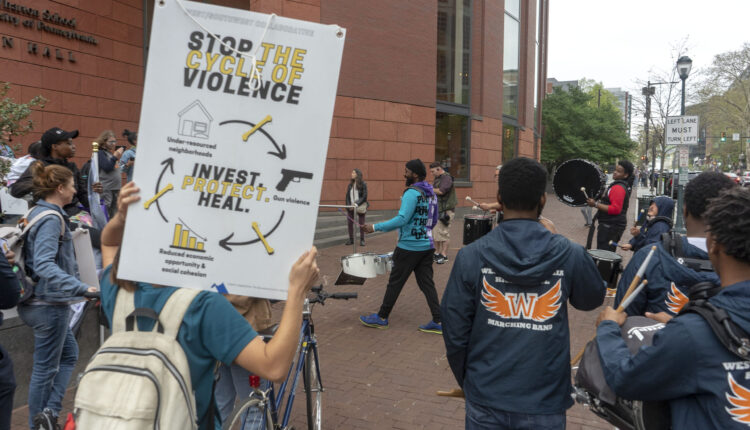 Americans have always held, as a matter of faith, that if they don’t like something, at least they have the freedom to raise hell about it. At a minimum, it makes them feel better — like they’ve done something. There’s even the possibility that it might lead to change.

When it became clear that the war in Vietnam was floundering and that the Pentagon was shoveling the best and brightest of our youth — most conscripted against their will — into the killing fields of an undeclared, stalemated war, protests convulsed the nation. The more the government tried to mute them, the louder and more numerous they got.

It took a dozen years and three presidencies, but in 1975, with domestic support for the war nil, the last U.S. troops left Vietnam and use of the military draft was discontinued.

The vicious 1992 beating of Rodney King by Los Angeles police and George Floyd’s curbside killing 28 years later by a Minneapolis cop who blithely ignored pleas from horrified onlookers for nine minutes were both captured on video. Both times, images of Black men being savaged by white officers sent pent-up rage from four centuries of injustice spilling into the streets from sea to shining sea.

Those flashpoints forced introspection as a nation into the historic and continuing inequities visited upon Black Americans and, after Floyd’s death, brought incremental changes to policing procedures. It forced the removal of Jim Crow-era totems of white supremacy in numerous cities, especially Richmond, Virginia, where statues celebrating leaders of a treasonous enemy of the United States were at last dismantled along Monument Avenue, until recently the world’s largest collection of consolation prizes.

In May, the leak of a draft U.S. Supreme Court ruling that would, weeks later, reverse the court’s 49-year-old precedent guaranteeing women the legal right to abort unwanted pregnancies touched off protests nationwide, particularly near the Supreme Court building and outside the Fairfax County, Virginia, home of the author of the majority opinion that struck down the Roe v. Wade decision, Justice Samuel Alito.

Among the protesters’ messages for the justices: images of coat hangers, a grisly reminder of a day when those were instruments of illegal abortions before Roe established a right of privacy that covered abortions. Protest placards read: “No privacy for us, no peace for you.”

This time, though, the outlook for protesters is uncertain and complicated.

Some authorities are actively trying to suppress public demonstrations outside the homes of the justices, and there is a federal law that unambiguously empowers police to do just that.

Could the ultimate decision reside with the very justices who would have to weigh their own peace and comfort against the First Amendment?

Granted, nobody wants crowds picketing, chanting, waving signs and using bullhorns outside their homes — the refuge for themselves and their families. The protests in question target the court’s conservative majority. The nine jurists on the court hold unmatched legal authority and lifetime sinecures during which to exercise it — their decisions are the final word on any legal dispute arising in the United States.

Nor is it an extraordinary leap to imagine someone might attempt violence against a judge or officer of the court. In June, an armed California man arrested near Justice Brett Kavanaugh’s Chevy Chase, Maryland, home told police that he was suicidal and intended to kill Kavanaugh.

Further, it’s beyond dispute that the justice system collapses at every level if outside forces are allowed to intimidate or corruptly influence judges, so some level of security is necessary for judges. On July 1, Gail Curley, the marshal of the Supreme Court, sent letters to Virginia Gov. Glenn Youngkin and Maryland Gov. Larry Hogan as well as the top officials in the Washington, D.C., suburbs of Fairfax County, Virginia, and Montgomery County, Maryland, imploring each to strictly enforce local and state laws to halt the protests.

Those laws seem destined to collide with the clear language of the U.S. Constitution. And if that happens, could the ultimate decision reside with the very justices who would have to weigh their own peace and comfort against the First Amendment?

“The answer is yes, though it has already,” said longtime First Amendment lawyer Michael A. Bamberger who recalled a 1965 opinion that upheld a Louisiana law modeled on the current federal statute and found constitutional, even though it reversed a conviction obtained under the state law because it had been improperly applied.

Along with assuring the freedoms of religion, speech and the press, the First Amendment also expressly guarantees “the right of the people peaceably to assemble, and to petition the government for a redress of grievances.” The framers added no codicils of qualifiers: no asterisks, footnotes, exceptions or subsections.

Over time in the United States, the rights of assembly and the right to petition have “been subsumed” into the right to expression, said Bamberger, a senior counsel with the law firm Dentons who has tried more than 100 First Amendment cases. “And that’s interesting because the right to petition goes all the way back to the Magna Carta and was considered very important to the people who wrote the Declaration of Independence.”

The test would likely be whether the laws squelch expression based on what is being said, according to Gabe Walters, a Richmond-based attorney with FIRE, the Foundation for Individual Rights and Expression.

Laws in Maryland and Virginia have already been questioned by officials in those states, who said as much in their responses to Curley’s letter.

“The law cited in the letter is a likely violation of the First Amendment, and a previous court case refused to enforce it,” said Fairfax County Board of Supervisors Chairman Jeff McKay. A separate statement from the Fairfax County Police Department said its Civil Disturbance Unit is skilled at providing “a safe space for individuals to exercise First Amendment rights and also maintain community safety.”

Hogan’s spokesman tweeted Maryland’s response, noting that Attorney General Merrick Garland, the nation’s top law-enforcement officer, had already declined a written request made jointly by Hogan and Youngkin to use federal assets to enforce the federal law. In a pointed rebuke to Curley, the spokesman continued: “Had the marshal taken the time to explore the matter, she would have learned that the constitutionality of the statute cited in her letter has been questioned by the Maryland Attorney General’s Office.”

Bamberger questions whether a claim that protests are an attempt to influence the court can now be valid. The court has ruled on hot-button issues such as abortion, gun-rights, public school prayer and gutting federal power to regulate pollution from power plants and is recessed until a new term begins in October. How, he said, can protests now against those decisions be construed as undue influence?

In early May, after POLITICO published the leaked draft but before the final ruling had been issued, Youngkin struck an ideal balance in melding a cooperative state and local police response to demonstrations outside Alito’s home that shielded the justice and his family and protected the rights of those peaceably assembled.

Youngkin’s response to Curley’s letter was to agree with her contention that “threatening activity outside the justices’ homes has increased,” but argue that the duty resides mostly with Fairfax County and the feds, bluntly imploring Garland to “do his job by enforcing the much more robust federal law.”

“Every resource of federal law enforcement, including the U.S. Marshals, should be involved while the Justices continue to be denied the right to live peacefully in their homes,” read a statement from Youngkin’s office. “The governor remains in regular contact with the justices themselves and holds their safety as an utmost priority.”

So there’s no clear forecast for what awaits those who protest within earshot of a justice’s home. The answer from bright legal minds: “We shall see.”

Free expression has not fared so well recently in the courts or elsewhere in government but shrinking from the challenge and meekly acquiescing is the wrong response.

The answer must come from a place of principled patriotism and the courage to dissent, not from guessing what the court might do. Our republic is never well-served by allowing the First Amendment to atrophy from disuse.

Bob Lewis is a columnist for the Virginia Mercury, a sibling site of the , where this piece first appeared.

Amid GOP accusations of hiding, Fetterman to make a campaign trail return